India – could it yet replicate China in nuclear power? 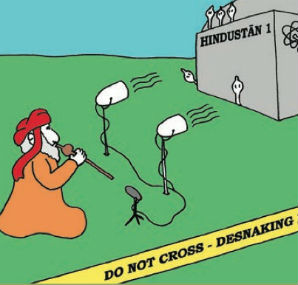 With India expected to account for a quarter of the expected global growth in energy demand to 2040, nuclear power could play a substantial role. But infrastructure, financing and public acceptance challenges all need to be overcome in order for India to achieve ambitious expansion plans. By Steve Kidd

China has attracted nearly all the column inches devoted to an individual country when energy matters have been discussed in recent years. The rapid growth of its energy demand, met largely by fossil fuels, has attracted a huge amount of comment. The implications for air quality in the cities and on global carbon emissions have been extensively discussed. Just recently, however, the focus has moved on to India. As economic growth in China has slowed sharply and the population begun to stabilise, the other huge developing country is now attracting attention.

Following many years of 8-10% per year economic growth rates in China, India has been left at a much lower level of development. But economic performance has improved in recent years and the current government under prime minister Modi is generally regarded as very competent in economic matters. It certainly needs to be, as despite the likelihood of India surpassing China's population level in the 2020s, living standards are for the average Indian are still relatively low and on a par with much of Africa. Assuming that economic growth can be maintained at 6-8% per annum over the coming years, India will become increasingly important in the energy world. Its likely dependence on fossil fuels became a focus at the COP21 climate change discussions in Paris in December.

India has insisted that its economic development should not be constrained by measures devoted to solving the global warming problem, which has arguably been caused by today's developed economies. At one extreme, there has been a claim that the world is trying to impose a form of "carbon imperialism" on India and the developing world.

This prompts the question of how much nuclear power will grow in India. Could it become another China, which is now dominating worldwide nuclear growth? A good starting point is the recently released 2015 edition of the International Energy Agency's (IEA) World Energy Outlook, where India is the subject of an in-depth country focus.

The report claims that India will contribute the single largest share of growth in global energy demand (around one-quarter) in the period to 2040. Today it is home to one-sixth of the world's population and is its third-largest economy, but it accounts for only 6% of global energy use. One in five of the population (around 240 million people) still lacks access to regular supplies of electricity. With policies in place to accelerate the country's modernisation and develop its manufacturing base, an additional 315 million people will be living in India's cities by 2040. Demand for coal in power generation and industry will surge, increasing the share of coal to almost half of the energy mix and making India by a distance the largest source of growth in global coal use. Oil demand increases by more than in any other country, approaching 10 million barrels per day by 2040. This has very adverse implications for clean air and global carbon emissions. The IEA is uncertain over the pace at which new large hydroelectric or nuclear plants can be built, so there is a strong reliance on solar and wind power to deliver on its pledge to have a 40% share of non-fossil fuel capacity in the power sector by 2030.

Meeting India's energy needs requires a huge commitment of capital. Three-quarters of the investment will be in the power sector, which must almost quadruple in size by 2040 to keep up with projected electricity demand. Today it is beset by high network losses and high financial losses among the local distribution utilities.

India was one of the first countries to adopt nuclear power technology, with its first commercial reactor coming online in 1969. However, despite many ambitious and detailed plans for rapid expansion, there is currently only 5.3GW of nuclear capacity in place, representing 3% of total power generation. A major constraint has been that India relies on indigenous technologies, as it has not signed the Nuclear Non-Proliferation Treaty (which led to restrictions on the export of nuclear materials to India). However, following the India-US Civil Nuclear Agreement in 2008, the Nuclear Suppliers Group lifted the sanctions that had been in place since 1974, opening the door for India to trade with foreign suppliers of nuclear fuel and technology.

India therefore maintains a strong commitment to develop additional nuclear power as a way to meet its rising energy needs and enhance its energy security on a low-carbon basis. Its current target is to triple nuclear power capacity over the next ten years (to 16GW in 2024). It also has a longer-term target for nuclear power to supply 25% of the nation's electricity by 2050.

India currently has six reactors, with a total capacity of 4GW, in various stages of construction, so must step up sharply if the targets are to be met.

The 2008 agreement meant that foreign suppliers of nuclear power plants can do business in India and it was hoped that several of these would assist with the development of new sites. However, few suppliers have been willing to make investments, due to concerns that India's nuclear liability law holds them directly liable in case of an accident. The standard practice internationally is that liability rests with the plant operator. This in India would effectively mean the government, since the sole operator, Nuclear Power Corporation of India Limited (NPCIL) is government-owned. India has recently set up an insurance pool that provides cover to the operators and suppliers in the case of a nuclear accident but it is doubtful if this solution provides adequate reassurance.

Based on estimates of levelised costs of nuclear power plants coming online in 2030 (the IEA says US$69/MWh, lower than most other parts of the world), nuclear power appears to be an economically attractive option in India, particularly in parts of the country distant from major coal reserves. Nonetheless, building a nuclear power plant is a very capital-intensive undertaking, involving a large upfront investment, and it will likely be very reliant on foreign capital for investment. It will require an attractive legal and regulatory framework. Progress has been made, but it remains to be seen if the large sums will be forthcoming. In contrast, most of the Chinese nuclear programme has been financed domestically by state-owned companies, who have access to the funds of state-owned banks. Only recently has recourse been made to private finance. It is clear that there are a number of large public and private Indian companies who would like to get involved in India's nuclear programme, but so far NPCIL has maintained a monopoly. This may not last.

Public concern is also likely to exert a powerful influence on the prospects for nuclear power in India. India is a very lively democracy and some observers contrast this with China, where it is claimed (rather inaccurately) that the national government can completely override local concerns. The debate in India about nuclear power plants was originally focused on local land rights, displaced communities and compensation for siting a plant nearby. But since the accident at Fukushima there have been more widespread concerns about plant safety and the risks of nuclear technology. Protesters have focused on the Kudankulam project, being built using Russian technology on the coast in the southern state of Tamil Nadu. The state was badly affected by the Indian Ocean tsunami in 2004, hence the link with Fukushima.

In the IEA's main "New Policies" scenario, India's nuclear power capacity increases to almost 39GW in 2040, its share doubling from 3% to 7%. But that implies a construction rate of only 1.3GW per year on average, whereas China is expected to achieve over 5GW per year. Even 1.3GW per year is significantly faster than the rate realised by India in the recent past and would need to be sustained over a long period. Other forecasters are therefore more sceptical about India achieving this level of expansion. For example the World Nuclear Association (WNA) in last September's Nuclear Fuel Report has India only reaching 20.6GW by 2035 in its reference scenario. Even the WNA's upper scenario for India (40.2GW of nuclear capacity by 2035) sees nuclear growth well below that of China in its reference scenario.

It seems highly unlikely that India will replicate China's expansion in nuclear, at least in the period to 2040. There remains a view that India is not as capable in big infrastructure projects as China is and the nuclear programme will suffer accordingly.

There are now effectively two nuclear programmes in India and there is clearly some degree of tension between them. The indigenous one is based on heavy water reactors, which is designed to move through fast reactors to thorium-fuelled advanced heavy water reactors. India's self-sufficiency extends from uranium exploration and mining through fuel fabrication, heavy water production, reactor design and construction, to reprocessing and spent fuel management. It has a small fast breeder reactor and a much larger one is now nearing completion. It is also developing technology to utilise its abundant resources of thorium as a nuclear fuel. The research and development facilities are impressive, including the Bhabha Atomic Research Centre near Mumbai and the Indira Ghandi Centre for Atomic Research. There are clearly many technical challenges to be overcome in moving towards a thorium based fuel cycle, but this is still deemed a necessity to avoid dependence on imported uranium.

The second programme is the development of light water reactors from foreign suppliers, where the Russians will almost certainly be involved in further units. The addition of Areva, and of US companies (or even Korean and Japanese interests in the future), remain in doubt. Strong political backing for nuclear power is clearly a necessary condition for its success in India and it has been there for a long time. But delivering a major reactor programme along Chinese lines requires foreign companies and wider sources of finance.

NPCIL's stranglehold over the Indian programme will almost certainly have to be loosened. Given the consequences of a 1 billion plus population reaching much higher levels of per capita power consumption, largely via fossil fuels, a bigger role for nuclear may receive an even stronger official push. A lot depends on how much renewables can achieve in power generation and the extent to which the Indian public can become convinced that nuclear power is not dangerous.