How tragedy plays out 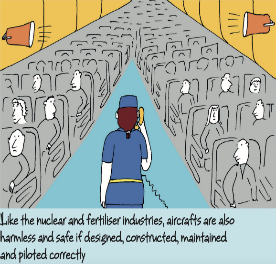 Jeremy Gordon looks at the recent disaster in Beirut and the reaction of the fertiliser industry to the explosion. How does this compare with response to a nuclear accident?

PROBABLY THE MOST VIOLENT EVENT of destruction in the last 75 years took place in Beirut, Lebanon on the hot afternoon of 4 August. Equivalent to 1.1kt of TNT, the blast created by 2750t of ammonium nitrate rates as one of the largest ever non-nuclear explosions, and was actually on the scale of a battlefield nuclear weapon. Watching the shaky mobile phone videos roll endlessly on TV that night I realised we were tuning into the final act of a drama that began long ago. I wondered who owned that cargo of ammonium nitrate on the day it exploded? Who allowed it to be stored like that — in a capital city? Who had sat on their hands and prevented it being moved somewhere appropriate over the course of seven years? How must those people feel right now, seeing the disaster they created?

But what about the people who produce ammonium nitrate, buy it, trade it, use it and profit from it? How do they feel, seeing immense devastation and human suffering from a failure in their safety system?

The ‘man made’ technological accident in Beirut killed at least 171 people, injured 6000, made 300,000 homeless and caused tens of billions in damage to property across a swathe of the city. Lebanon’s grain store was trashed and the port through which it imports 60% of its food was destroyed. The trauma that people are experiencing now is beyond imagination and it will take the city decades to recover. It will change the balance of power and the course of Lebanon as a country, or at least it should.

Over the next two days I toured the fertiliser websites of the world, to see what was being said or done in reaction. I found nothing. The fertiliser industry had taken no ownership of its role in the event. None at all.

In a way I can’t blame them. There were no political calls to phase out ammonium nitrate. The media was not asking what this stuff is, whether we really need it and how much is stored near you. Alternative fertilisers were not launching negative marketing campaigns. Activists were not probing the global supply chain, looking for forgotten cargoes or other gaps in the system (even though it is virtually certain there must be a frightening number).

Rechecking as I wrote this column I found a press release issued on 6 August by the International Fertilizer Association (IFA). It expressed sympathy for the people of Beirut and hoped that the reasons for the disaster would become clear as soon as possible. That it took two days to release an acknowledgement indicates to me there was internal debate whether it was necessary or wise to give any public reaction at all to their product inadvertently destroying a city.

“Like all types of fertilisers,” the IFA said, “ammonium nitrate is harmless and safe if transported, stored and handled correctly and in respect of best practice safety principles.

“The global fertiliser industry is strongly committed to ensure that governments are aware about risks inherent to mismanagement in storage and handling, as well as intentional and criminal misuse,” it concluded.

It is up to the world’s governments, then, to ensure explosive grade fertiliser safety regimes are effective. I didn’t check every government in the world, but neither the UN Food and Agriculture Organisation or the World Health Organisation’s chemical safety department were saying anything about that.

Nevertheless, I do have faith that the logistics companies and port authorities of the world will collaborate as best they can to prevent this happening again. Perhaps they too are not talking about it because nobody is asking them.

So, while companies, individuals and governments might be blamed on a case-by-case basis, it seems there is no safety imperative innate to the substance itself. There is no collective responsibility because in the fertiliser industry an accident anywhere is not an accident everywhere.

I was dumbfounded by this. It is just so alien to the experience of uranium and other nuclear materials, which are also harmless and safe if transported, stored and handled correctly and in respect of best practice safety principles.

I hope we get to the bottom of the Beirut blast and bring justice to those responsible. And then I hope HBO makes a dramatic mini-series about it because it is sure to be every bit as gripping as Chernobyl.

Why does every nuclear accident or incident turn into a millstone hanging around the neck of the industry, while far worse industrial accidents are allowed to be forgotten? To find an explanation I think we have to look back to the very start of the atomic age and the discovery of radiation itself.

It’s hard to imagine how exciting it must have been in 1896 when Henri Becquerel discovered radiation, which had been ubiquitous all along but completely undetected by humans, animals or science. It was only a couple of years before substances giving off this secret energy were identified by Marie and Pierre Curie. People had isolated a completely new form of energy coming innately from within matter itself!

Within a decade radium was lending its energy rays to all kinds of wacky health supplements. It was supposed to restore youth, green the desert and make vegetables grow bigger. How exactly it was supposed to achieve this nobody knew, but it obviously would — right?

Science seemed to be growing so strong that there might be no limit to its power and Ernest Rutherford joked that “Some fool in a laboratory might blow up the world”. HG Wells was pioneering science fiction. Aliens, time travel and atomic bombs came to life in his books. In The World Set Free, HG Wells imagined the atomic bomb as a kind of grenade that would continuously explode, ferociously burning everything around it and ending up as a semi-permanent hot spot of heat and radiation. Wells thought wars fought with these weapons would result in a reorganisation of global power — the old ways of governance would not be capable of controlling such a potent and dense source of energy. Scientists who may have read that book paved the way to create real atomic bombs that behaved differently but were even more frightening and did indeed reshape global power after 1945.

From the beginning, radiation and everything to do with it has been seen as extraordinary: categorically separate from other substances and capable of things that were previously unimaginable. Both the way people treated it, and the consequences, only underlined that for the first 50 years of the atomic age.

The most poignant example of radiation’s specialness can be seen in the example of Marie Curie. It is tragic both in a real sense and in the sense of Greek drama that radium began to kill her from the very moment she discovered it. Curie’s story can be seen as a real-life example of the Greek dramatic concept of hubris, which is the mistaken belief one can master elemental forces. In Greek drama, a character’s hubris always starts a process to bring their nemesis — their inescapable downfall — as if they had cursed themselves.

Hazardous substances have been around since we started stockpiling firewood and they are understood as possible to control, although sometimes an individual will make a mistake. But nuclear has always been categorised differently in our minds. Its forces and materials have always been seen as beyond the normal world, representing an ultimate power, and therefore impossible to be fully controlled. Any attempt to ‘harness the atom’ is to commit hubris and is certain to trigger disaster, even if it takes a million years.

This, of course, is completely wrong. There is no physical law of hubris, there are no supernatural effects from radiation and there is no inevitability of disaster. But the Greeks were right about the way human beings interpret the world. That’s why the people guilty of mistakes, incompetence and corruption in Beirut will face punishment alone, while guilt lasts for ever and is ascribed in advance to everyone even suspected of hubris regarding radiation.