How to replace coal 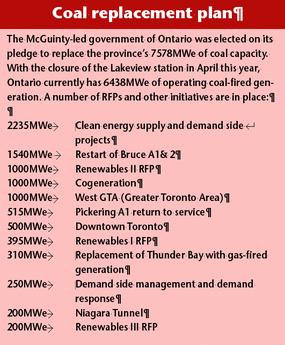 Announcing the coal phaseout plan in June, former Ontario energy minister Dwight Duncan commented: “We are leading the way as the first jurisdiction in North America to put the environment and health of our citizens first by saying ‘no’ to coal.” He added: “Maintaining reliability is the first principle of our plan.”

The plan describes how the government intends to replace the current 6400MWe of coal-fired capacity by the beginning of 2009 – slightly later than its election pledge of 2007. However, the scheme relies on only 515MWe of nuclear capacity – which is provided by the now completed restart of Pickering A unit 1. A footnote adds that the restart of Bruce A units 1 and 2 would add a further 1540MWe, but the success of the plan is not dependent on the additional capacity from the Bruce A 1&2 restart.

In an interview with NEI, David Butters, president of the Association of Power Producers of Ontario (APPrO), explained how the phaseout of coal would be implemented. His organisation has over 100 members, which are involved in the generation of over 95% of the electricity produced in Ontario.

The first coal-fired plant to be closed under the plan was the 1150MWe Lakeview station in April this year, Butters said. Four plants remain operating at present. “Thunder Bay – which is about 310MWe – will be replaced by gas-fired generation in about 2007.” However, the details for this replacement capacity are yet to be decided. “Atikokan, which is 215MWe, will be closed in 2007 and not replaced. There’ll be transmission upgrades that will be implemented to get around that issue.”

Finally, there’s the 3940MWe Nanticoke four-unit plant. “The plan there is to close the units through 2008 with the last unit to close sometime in 2009. In the meantime, there is work that needs to be done in order to meet that 2009 deadline to implement a number of transmission upgrades in southwestern Ontario,” said Butters. However, he noted: “The timing and the cost of those is a question mark at this stage.”

In preparation for the closure of Nanticoke, earlier this year the Ontario government launched two RFPs for renewable energy supply (‘RES II’ and ‘RES III’). The first of these is for up to 1000MWe, and the other for up to 200MWe. In addition, on 15 June, the OPA was directed to procure for: up to 1000MWe of generation in the West Greater Toronto Area; 250MWe or more of demand side management and/or demand response initiatives across the province with a particular focus in the cities of Toronto, Mississauga, Brampton and Oakville; and up to 1000MWe of high efficiency combined heat and power projects across Ontario, including industrial co-generation projects and district energy projects. A separate directive will also be issued to procure for up to 500MWe of generation for downtown Toronto.

While the plan is ambitious, Butters believes the government will get it right – assuming, of course, there are no unpredictable failures. “I can’t see any government of any persuasion in Ontario going forward with plans that would jeopardise either the industrial lifeblood of Ontario or which would open it up to political attack. Significant or frequent blackouts or brownouts would be political suicide so whatever they do, they’re going to be very prudent about it.” He pointed out that the last government was defeated partly because of the way it handled electricity.

While nuclear plays a minor role in the plan, all hope is not lost. “I think what the government is trying to do is to make sure that it’s got maximum flexibility,” said Butters.

One of the main issues with new generation projects – or bringing plants out of mothballs – is price, according to Butters. “We still have very low prices. If you look at prices historically, they’ve been averaging around 5.5¢/kWh,” he said. Depending on the company and the specifics of the particular project, Butters believes that anything much under around ¢10/kWh “is looking pretty dicey economically.” He observed that the 2005 average weighted hourly price has been running over $80/MWh, “but there’s still a pretty big gap there.” As a result, “those operators still really can’t receive the kind of benefit to support their investments that you would anticipate under more wide-ranging scarcity-type operation, without some kind of support payment arrangement under a long-term contract.”

The price the generator receives could clearly make or break the coal phaseout plan. Butters pointed to Imperial Oil’s 95MW cogeneration facility in Sarnia, which has not been operating. “They simply mothballed it because it’s cheaper for them to buy power from the grid than to self-produce,” he said.

And recently, OPG announced that it has decided not to go ahead with plans to refurbish Pickering A units 2 and 3 following management recommendations. According to OPG president and chief executive Jim Hankinson: “We don’t see a sound business case.” Hankinson stressed, however: “The return-to-service project is technically feasible and the units could be operated safely for several years.”

On the other hand, Bruce Power was able to negotiate a deal that it considered would make the restart of the Bruce units feasible. As part of the deal to restart Bruce A 1&2, output from all of Bruce A’s units will be sold at C$63/MWh, while output from Bruce B units will be sold as normal on the spot market and to fixed-price buyers. When the go-ahead to restart the reactors was announced, Donna Cansfield, Ontario’s new energy minister remarked that the move “is another step forward in the McGuinty government’s plan to increase Ontario’s supply of safe, clean, reliable sources of affordable electricity.”

Butters believes that generation is going to get more expensive. “One of the challenges the OPA is going to face – this is from a generator’s perspective – is how are we going to make sure that whatever we do, generation and transmission are treated equally,” he said. “You want to look at what’s in the best interest of the province over the longer period and that may frequently be generation; it may sometimes be transmission investments; but the costs of those will be recovered differently.”

One method used by the government in the recent RFPs is to offer a support payment. Butters explained: “You’re required to give the government your net revenue requirement and you’re expected to operate in the market. If you fall below that, you get a top-up to your net revenue requirement. If you go above it, then you’re required to pay that back to the OPA. So what they’ve given them is a floor and a ceiling. I guess the question you would want to ask is: ‘Are we getting the best projects, or are these RFPs just simply a race to the bottom and is that what we really want?’ I think the jury’s kind of out on that.”

Butters said that, reading between the lines, nuclear power is on the agenda, despite the somewhat disappointing role it appears to have in the phaseout plan. “Clearly it’s an important part of our mix now and to think that we’re going to change that radically would be naïve,” he said. Butters expects that the OPA is likely to recommend that nuclear retains its current share of the energy mix.

The OPA has also been entrusted with producing an integrated resource system plan. This plan, said Butters, “is a forward-looking document that looks out 10 or 20 years and looks at supply and demand, particular location constraints, transmission issues, and all of the kind of things central planners would look at.” The aim is to identify the particular energy requirements in specific areas. Obviously, this will be largely affected on what the government decides the fuel mix for the province should be.

Once the plan has been developed, it then needs to go to the regulator, the Ontario Energy Board, which would require a thorough review process. “It’s going to be an open and public process so one can expect that there’ll be some fairly significant effort on the part of those who have a very vested interest in one outcome or another to shape the course of events there. It’s kind of unclear exactly how that will look like at the end of the day,” Butters said. He estimates that the process will be completed by around 2007.

One further complication is that 2007 happens to be an election year in Ontario. Butters said that the Conservative party, which is the main opposition to the ruling Liberal party, is likely to be pro nuclear. So, from a nuclear perspective, he believes the election outcome should make very little difference.

The integrated resource system plan will provide the roadmap for nuclear power (and other energy sources) in the province. “We have two very large nuclear operators and I think the sense is nuclear has a very important role to play in Ontario and will continue to be kind of the anchor workhorse. But beyond the OPA’s work and its integrated resource system plan, it’s a little difficult to see what the timing of anything might be.”

While the recent focus has been on whether to bring the laid-up units at Pickering and Bruce back online, Butters said that this is not the most important issue for the nuclear industry. The main decision Ontario faces is not one of nuclear restarts: “Ontario will still have to deal with a nuclear fleet which will ultimately need to be replaced and the real question is when a decision will be made on new nuclear build.”