How to ensure a future for nuclear – Stage 1 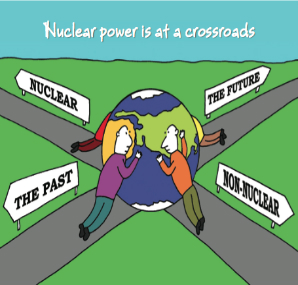 A new strategy is urgently needed to promote the future of commercial nuclear power, as Steve Kidd explains. This requires reform of international regulatory regimes and a reassessment of energy policy decision making.

My three articles (1, 2, 3) in 2018 to date have focused on where nuclear power stands today, both in terms of the possibilities of substantial new build and the continued operation to 60 years and beyond of today’s fleet of reactors. Writers on nuclear tire of concluding that nuclear is at a crossroads, but that remains the case. If nuclear advocates can argue that the environmental impact of nuclear power is trivial by comparison with other generation, it should be possible to achieve traction when clean air and minimising greenhouse gas emissions have become important to the world’s population. Other arguments in favour of nuclear may then be put forward, such as enhancing supply security and (in many cases) favourable operating costs.

Many scenarios for the future now recognise that nuclear has an important part to play if general energy goals for the 21st century are to be achieved. People previously opposed to nuclear (including some within the environmental movement) have shifted their ground. Yet on a sober assessment of the evidence today, achieving the nuclear growth highlighted in the scenarios looks highly unlikely. A remarkable feature of nuclear power’s contribution to world electricity supply has been its steadiness over many years. Generation reached 2000TWh in 1990, then carried on rising slowly to exceed 2500TWh in 1999 and 2000. During these years, the nuclear share of world electricity remained at roughly 17%. Since then, apart from reaching 2800TWh in 2006, worldwide nuclear production has stabilised at 2500-2700TWh. But rapidly growing power demand in many parts of the world means its market share has fallen to around 11%.

The most likely scenario for the future is moderate growth at best, eventually reaching 3000TWh but probably struggling to get much beyond. The next ten years are likely to see an average of 7-10 new reactors starting up annually worldwide, to be offset by 4-7 units shutting down. The industry’s goal of achieving over 1000GWe of capacity and tripling nuclear production to 7500TWh by mid-century looks like a fantasy.

The number of countries that see nuclear playing an increasingly prominent role in their energy supply is today very limited. In many of the countries where nuclear is currently well-established merely maintaining the existing position is going to be challenging, with closures rather than new build on the cards. The chances of nuclear achieving substantial growth globally without North America and Western Europe look negligible.

Where new reactor programmes are set to go ahead, such as in the UK, it is often to maintain rather than grow the nuclear share. There will undoubtedly be substantial nuclear growth in China and India (and maybe other important developing countries) but without a proper renaissance of nuclear in the West the global targets seem almost impossible to achieve. Moving away from coal and other fossil fuels has to involve a large element of new nuclear, as well as renewables.

The overall theme of these columns over the period since the Fukushima accident in 2011 is that this cannot be achieved without a paradigm shift. I characterise the history of nuclear power since the 1970s (if not the 1950s) as being dominated by a fear paradigm, which is based on deep concerns about the impact of incremental radiation exposure. This, sometimes indirectly, is an important driver of the important arguments advanced against nuclear, such as plant safety, waste management and economics.

The task is to end the exceptionalism of nuclear, to get the technology and its commercial application regarded as just a normal business, rather than something characterised by a huge number of misunderstandings (indeed some blatant lies) and emotion. This task is obviously a huge one, as it is asking people to unlearn most of what they understand about nuclear. The starting point for this has to be achieving a better public understanding of radiation and reforming an international regulatory regime which assumes any incremental doses, however small, are potentially harmful. Those refusing to accept sensible exposure thresholds have to prove that their position is beneficial to human life and health, even if this creates all the stress and uncertainties we saw in the evacuations of citizens after Fukushima. A credible cost benefit analysis of this and alternative regimes needs to happen.

The nuclear industry and its representative organisations have refused to embrace this approach. In the aftermath of Fukushima, there were discussions within the industry about “rebranding nuclear”. Yet nothing of note has been achieved by the same tired old strategies that have failed in the past, although they have been revamped for a new environmentally-conscious age.

Energy decision-making must be reformed in key countries. This has two stages. Firstly, the health, environment and safety benefits of nuclear have to be valued correctly, compared with other energy sources, by focusing on enhancing genuine public wellbeing. Then a level playing field in energy markets has to be achieved where nuclear energy is treated on equal terms with other technologies, valuing not only health and environmental qualities, but also reliability and true grid system costs.

That energy policies in many countries are clearly sub-optimal in achieving their objectives is hardly a new revelation and the nuclear sector has been pushing this point for many years. Governments often end up making power supply less secure, more expensive and dirtier. To expect them suddenly to embrace a more rational, evidence-based approach in policy-making is asking a lot. The big hope for nuclear is that policy-makers eventually appreciate that renewable energy has severe limitations and realise that they need a lot more nuclear to achieve environmental, security of supply and economic objectives. This may happen one day, possibly even before 2050, but the omens today don’t look so good.

The problem is that for many countries, nuclear is either ruled out or severely hindered because of the fear paradigm. The industry may argue that the advantages of nuclear are so overwhelming that the radiological protection regime is minor, but this is not the case. If people are afraid of a technology, a factually based evaluation of relative merits goes out of the window. Germans, Austrians and (now it seems) South Koreans are not prepared to use a technology which makes them feel uncomfortable, especially where there are good alternatives available.

Their opposition is also not irrational. All they are doing is responding to what they have learned about nuclear, where adverse images have never been successfully countered by fact- and evidence-based nuclear advocacy.

A problem for those trying to favour nuclear with powerful arguments is changing political discourse. Modern politics increasingly resembles a form of tribal warfare, with disrespect for anyone professing to be an expert and a lack of tolerance. There cannot be a proper debate between competing parties unless they accept each that the other’s view is worthy of discussion. Achieving a balance in energy policy - accepting that many technologies have an important role to play in tackling climate change not ruling some out for ideological reasons - becomes more difficult. People resent each other’s differences, rather than cherishing shared goals.

Any campaign to change things demands a huge focus. It may be possible to win over and excite a new younger generation with an expansive nuclear future, but I would argue for putting all this to one side to concentrate directly on overcoming the fear paradigm. This is a precondition for achieving the 1000 or more nuclear reactors.

The problem can be described quite simply. If nuclear power becomes three times as big as it is today, the chance of there being a significant accident involving offsite radiation exposure also triples. If the Linear No Threshold (LNT) model of radiation protection is still in place, the outcome is unlikely to be much different to the aftermath of Fukushima. In other words, a mass of confusion, uncertainty and sub-optimal policy-making.

LNT means, in many people’s minds, that nuclear power cannot be acceptable. It is therefore a mystery why the nuclear industry does little to overcome it. One reason is that it will be very difficult to do so. But if nuclear power is to be a long-term business and appropriate as an energy solution for this century and probably beyond, a start has to be made somewhere.

One big problem is that the nuclear sector has now been around for 60 years and has huge inertia. A range of institutions has grown up around it staffed by people who claim to be very much in favour of more nuclear, but do nothing to advance it. Much of what they do is actually harmful.

Meanwhile, many staff have grown up with LNT and their careers have been based on it. Trying to get the general population to understand that radiation is not so scary after all is not going to be their focus. Others involved in non-proliferation and nuclear security aspects continue to focus on unlikely scenarios which also rely on perpetuating nuclear fear.

The nuclear sector is actively promoting nuclear as one of the solutions to climate change, while accepting that people should be fearful of it! This resembles the renewables lobby: both act so serious about climate change, but all they seem to be doing is promoting themselves.

Nuclear is trying to join balanced environmentally- focused energy strategies with groups who are determined to shut it down, because it feels too weak to shout louder. So, it will remain as the last resort in most countries’ energy strategies – and as new energy solutions gradually become available, it will recede further and further into the future.

In short, a new strategy is badly needed today, much tougher and much more focused than in the past.