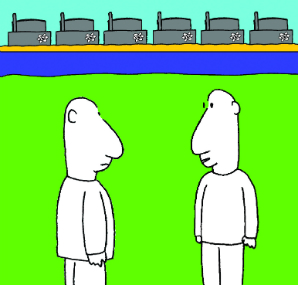 The annual BP Statistical Review of World Energy is rightly regarded as The Bible of energy numbers and is launched with something of a fanfare every June. It's very good PR for BP, especially after the battering it has taken in the Gulf of Mexico, and as a digest of summary statistics it provides something much more digestible than the tables in the International Energy Agency's (IEA) World Energy Outlook (WEO). Nuclear energy is summarised in one table, which highlights nuclear energy consumption by country over the past ten years. The rows for both Hong Kong and Singapore show a line of dashes. This is no doubt what most people, including many in Hong Kong and Singapore themselves, would expect to see. Both are extremely-densely-populated small territories, with little space for a nuclear power station. Yet Hong Kong is a big consumer of nuclear power from mainland China, and is set to import much more in the future. Singapore, on the other hand, formally turned its back on nuclear in a government report issued in autumn 2012. It is therefore worth looking at both places in more detail; so Hong Kong will be covered this month and Singapore in June.

[Cartoon: "I have been living all of my life without nuclear power; I'm sure we can continue to afford to live without it." By Alexey Kovynev]

First of all, the BP Review is not completely wrong. The possibility of cross-border power sales is covered by a footnote that says that such transfers are not accounted for in the table. This can, however, lead to a misleading picture: what is shown in the table is not consumption of nuclear power by country, but generation. To fit in with the other tables in the Review, BP has chosen to assume that production equals consumption.

Hong Kong's population of seven million people receive power from two utilities, the Hong Kong Electric Company (HKE) and China Light & Power (CLP). HKE supplies about a quarter of the territory's total to Hong Kong Island and some of the other smaller islands. Its main source is the large, dirty and unattractive coal-fired station on Lamma Island (which is ironic, given how popular Lamma is as a destination for tourists, who enjoy its scenic fishing village). CLP supplies the Kowloon peninsula and the New Territories bordering onto China itself, and also some of the islands (such as Lantau, where the airport is now situated). CLP has a more diversified supply, generating power with a mixture of coal and gas plants on its territory, plus importing nuclear power and hydroelectricity from adjacent Guangdong Province in mainland China. There is an interconnector between the two Hong Kong systems (to cope with unusual circumstances on either the supply or demand side) while CLP is obviously also connected to the mainland. This is not just to import power: CLP can certainly export power to China too, and has done so in the past.

CLP's current nuclear activities are centred on the Daya Bay site. Daya Bay Nuclear Power Station is owned by Guangdong Nuclear Power Joint Venture Company (GNPJVC) in which CLP is a 25% equity partner through its wholly-owned subsidiary Hong Kong Nuclear Investment Company (HKNIC). Through HKNIC, CLP also has a partial ownership (12.5%) of the station management and operation company the Daya Bay Nuclear Power Operations & Management Company (DNMC). CLP has nominated key managerial positions at Daya Bay and DNMC (including the number two executive) to contribute towards nuclear safety and to support the management of the facilities at international levels.

The station was effectively the first commercial nuclear power station in the Chinese Mainland, and was largely financed in Hong Kong. It is one of the earliest and largest joint-venture projects launched under China's Open Door Policy, and certainly remains one of the most successful. The site was chosen because it is technically suitable for a nuclear power station and is close enough to supply power to Hong Kong. There are two pressurised water reactors (PWRs) with a total electrical capacity of 1968 MWe, and were based on a technology transfer agreement with France. They are standard 3-loop French PWR units supplied by Framatome and designated M310, with GEC-Alstom turbines. Electricité de France (EDF) managed construction, starting August 1987, with the participation of Chinese engineers. Commercial operation of the two Daya Bay units was in February and May 1994. The reactors are therefore similar to the first generation of French reactors built in the late 1970s and 1980s, and on sites outside France such as Koeberg in South Africa. The World Association of Nuclear Operators (WANO) has consistently given favourable assessments of Daya Bay's management, operation and safety, and the plant has also been a frequent winner of awards in the Safety Challenge Competition organized by EDF.

The two Daya Bay reactors produce around 14 billion kWh of electricity per year, of which 70% is exported to CLP's Hong Kong system. This is well beyond CLP's 25% shareholding in the joint venture company. In September 2009, the supply contract between Daya Bay and CLP was extended to 2034, 40 years after commercial operation began. The twin reactors can no doubt operate beyond 40 years, but this will be subject to safety assessments (and maybe substantial further capital investment) nearer the time.

There are also four other reactors on a site adjacent to Daya Bay which are also operated by DNMC. These are Ling Ao 1-4, which came into operation between 2003 and 2011. Again these are based on the Framatome design and the last two units are designated as CPR-1000s, which are the mainstay of the current Chinese reactor construction programme. CLP, however, has no shareholding in these reactors and the power all goes to booming Guangdong Province. They are 100% owned by the China Guangdong Nuclear Power Corporation (CGNPC).

Thanks to Daya Bay, about one-quarter of Hong Kong's total power currently comes from nuclear (well above the world average of 14%). Owing to environmental concerns, notably the dirty air in Hong Kong, the local government plans gradually to close down the coal-fired plants, and by 2020 to get 50% of its power from mainland nuclear, 40% from gas locally and the remainder from coal (about 7%) and from renewables (3%). This will include some supply from a hydro station in Guangdong Province, since the opportunities for renewable generation in Hong Kong are small (to say the least).

Although CLP could buy more nuclear power from CGNPC in Guangdong province, it clearly has felt the need to make a further investment in nuclear generation there. Yangjiang city in western Guangdong province had originally been earmarked for China's first Generation III plants, so maybe for Westinghouse AP1000s or AREVA EPRs. After plans changed in the light of pressing generation needs in the region, Yangjiang will be the second nuclear power base of the China Guangdong Nuclear Power Group (CGNPC). Development of all six units of the Yangjiang plant was approved in 2004, with the CPR-1000 later confirmed as its technology. Yangjiang 1-6 will be operated under Yangjiang Nuclear Power Co Ltd (YJNPC) management. In July 2010, CLP agreed to take a 17% stake -- the equivalent of one reactor. One assumes that CLP will therefore take about 1 GWe of power capacity for its own use, although (like at Daya Bay) it could contract for more. Construction of the first of two units at Yangjiang started in December 2008, for commercial operation in 2013-14. Construction on the first unit of the second pair started in November 2010, with the last unit to be completed by 2017. Start of construction of unit 4 was delayed by the moratorium on new starts in China post-Fukushima, but first concrete was poured in November 2012, immediately after the safety authority relaxed its restrictions.

The general public in Hong Kong has seemed to be ignorant about nuclear power, and its importance in Hong Kong’s energy mix.

Despite all of this backstage activity, the general public in Hong Kong has seemed to be ignorant about nuclear power, and its importance in Hong Kong's energy mix. CLP put little effort into explaining its nuclear operations, on the basis that they are essentially out of sight (and therefore perhaps out of mind). It learned differently in June 2010 when a minor fuel-related incident at Daya Bay on 23rd May was blown out of all proportion by the local media. The assessment of the incident indicated that an imperfect sealing of a fuel rod in the reactor core of Unit 2 leaked radiation into cooling water -- rather like an oil leak in a car engine.

Not having carried out the necessary groundwork with the public in Hong Kong, CLP's whole nuclear strategy could have been thrown into doubt. It handled the incident very well in the circumstances, emphasizing that the incident was a minor operational event with no impact on public safety, public health and the environment. It pointed out that there was no chance of a leakage of radioactivity from the station, as the reactor cooling water was enclosed completely by another two layers of containment and isolated from the external environment. The situation was even too minor to be rated on the International Nuclear Event Scale (INES). Nevertheless, the power station reported the situation to the Chinese National Nuclear Safety Administration and the Daya Bay Nuclear Safety Consultative Committee proactively and voluntarily.

This incident has served as a warning to CLP about going ahead with nuclear plans without greater public engagement; it has subsequently taken a number of actions. This includes introducing a more timely reporting and consultation system for any incidents at nuclear plants from which it sources electricity, and also setting up a Nuclear Resources Centre in Kowloon, where the general public can learn a lot more about nuclear power. Many visits have been arranged for Hong Kong citizens to Daya Bay over the years, but the provision of a high-tech education centre in the heartland of its service territory is a superb investment. It promotes the concept of environmentally-friendly power generation with nuclear at the centre.

Hong Kong therefore seems well-placed to be an important area for nuclear power to extend its reach. The public acceptance challenges, particularly after the Fukushima incident, are being tackled. The main problems with renewable power generation are its intermittent and non-intensive nature. It cannot match very well the levels of intensive energy use required in a major conurbation such as Hong Kong, nor, for that matter, a Chinese province with growth as impressive as Guangdong's. To replace nuclear with more natural gas in Hong Kong would be hugely expensive, given the cost of liquefied natural gas (LNG) in East Asia, and it would also mean significantly higher carbon emissions. GNPJVC paid back all the initial loans taken out for Daya Bay 1 and 2 within 15 years, and the reactors are operating at high (close to 90%) capacity factors. Its power is therefore very low-cost, probably below 2 US cents per kWh, as well as clean and reliable.

Steve Kidd is an independent nuclear consultant and economist, following 17 years of work in senior positions at the World Nuclear Association and its predecessor organization, the Uranium Institute.