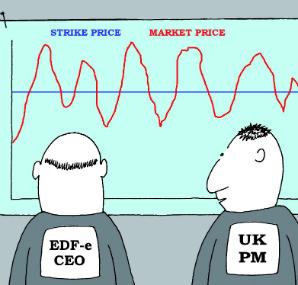 The announcement on 21st October 2013 of the basic commercial agreement between EDF Energy and the UK government on the key terms of the proposed investment contract for the Hinkley Point C (HPC) nuclear power station was a notable boost for the international nuclear industry. Also of great significance was the announcement of the intent of two Chinese companies, CGN and CNNC, to invest in the project to build the two EPRs as minority shareholders.

[Cartoon by Alexey Kovynev. UK prime minister "Because of these damned price fluctuations I can't understand who owes who whom, and by how much"]

There is now a widespread assumption that the project will go ahead, but it is still subject to a so-called "final investment decision" to be made by all the partners by July 2014. This requires a formal agreement on the full investment contract, the finalisation of agreements between EDF and its partners (including AREVA as well as the Chinese) for equity funding and a green light from the European Commission on not violating rules on state aid. One assumes that the UK government has done the necessary groundwork to be very confident about the last of these, but the commercial case for the reactors remains very interesting and potentially not watertight.

An important point is that the revenue stream for the first 35 years of the project is effectively guaranteed. The so-called 'strike price' for the power to be delivered under the anticipated 'contract for difference' is indexed for inflation and is what EDF will get for each kWh of power it delivers (if the market price at the time is above the strike price, the government receives the difference; if it is below, the government has to pay EDF).

"Whether to go ahead now from the EDF side seems to be solely a matter of the level of costs."

Although no EPR is yet in operation, as an evolutionary development of two well-proven reactors, the Framatome N4 and the Siemens Konvoi, it seems realistic to assume that the HPC reactors will run at roughly a 90% capacity factor through their operating life. So whether to go ahead now from the EDF side seems to be solely a matter of the level of costs. There can't be many investment decisions today of this sort, in which the revenue is guaranteed and only the costs are uncertain. In most such decisions, it tends to be the revenues that are unknown. For example, a new product has been devised, or a company decides to move into a new market. Nobody can be sure how many customers will be interested, yet the costs have been calculated carefully and probably with a reasonable degree of accuracy. So the likely return on the investment is largely a function of the revenue side of the equation.

"It is likely that the total operating costs (fuel and O&M) will be somewhere around 2 pence per kWh."

Yet this apparent win for EDF doesn't make the decision whether to go ahead with the project an easy one -- even when the operating costs of the reactors must be known with a reasonable degree of certainty. The fuel costs are essentially known (unless there is a somewhat unlikely significant escalation in world uranium and enrichment costs). The reactors should run as planned, given that before 2023 (now the planned HPC start-up date) the EPR units now under construction at Olkiluoto in Finland, Flamanville in France and the pair at Taishan in China should already have been in operation for a few years, allowing any initial problems to be ironed out. Therefore operations and maintenance (O&M) costs, both fixed and variable, should also be known with a high degree of certainty. It is likely that the total operating costs (fuel and O&M) will be somewhere around 2 pence per kWh. In 2012, the average US nuclear plant had costs of 2.40 US cents per kWh (0.75 cents for fuel and 1.65 cents for O&M). If we add in an allowance for used fuel management and decommissioning expense, 2 pence per kWh should be about right. The strike price is either 8.95 pence per kWh (if EDF goes on to also build Sizewell C) or 9.25 pence per kWh (if it doesn't) so there should be a (seemingly very nice) margin of about 7 pence per kWh at Hinkley Point over its operating lifetime.

To continue with some further back-of-the-envelope calculations, at a 90% capacity factor, each of the HPC reactors should generate about 12 billion kWh of electricity each year. So at an operating profit of 7 pence per kWh, each reactor should contribute about ??840 million, therefore £1,680 million for HPC as a whole. This annual profit has to pay back the project costs before commissioning in 2023, now assessed at £16 billion, the interest charges and a rate of return on the capital employed. From these numbers, it looks like the rate of return is about 10%, as has been widely mentioned.

Can it build on time and budget?

"The key risk for EDF is in only one place: construction cost and schedule."

These are very big numbers and highlight the magnitude of the project, both in terms of the power to be produced but also the financial numbers. But the key risk for EDF is in only one place: construction cost and schedule. Can it build on time and budget? The experience in Europe at Olkiluoto and Flamanville is very negative, but at Taishan (albeit under Chinese conditions) very positive. Involving Chinese companies as equity partners is clearly a good thing, but can much of the Chinese construction experience be transferred to UK?

Even when the revenue side of the equation is taken care of, the focus on whether we have more new nuclear power stations in the world depends essentially on the construction cost. In the western world at least, these are high, and impose substantial risks on any project. On the other hand, the construction costs at Taishan have been roughly estimated at about US$ 2750 per kW, so about US $9 billion or £6 billion in total: so well below the £16 billion for HPC. If only this level could be achieved outside China (and South Korea)! On the other hand, in China, there is a fixed wholesale price for power from new nuclear plants of 0.43 RMB per kWh, so only about 4 pence per kWh. Nevertheless, if construction costs of new plants can be kept down there (which may be difficult with increasing affluence and rising worker wages), this implies a decent rate of return for the investors.