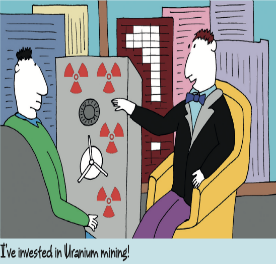 The coronavirus pandemic has hit most markets hard, but uranium is bucking the trend, Jeremy Gordon explains.

WHEN BILLIONS OF WORKERS were told to stay at home to avoid transmitting coronavirus, the ensuing global economic slowdown had a huge impact on markets, but not all were affected in the same way.

In March and April two of the biggest players in uranium decided to protect the health of workers and communities by curtailing production. Cameco placed Cigar Lake into care and maintenance and then Kazatomprom announced it would reduce staff on its sites to the minimum possible for up to three months. Coming on top of a decade of belt-tightening, mothballing and suspensions across the entire uranium sector, the impact of a change of up to 4000t in Kazatomprom’s annual production was the disruption that sparked a long-awaited inflection in the uranium market.

Tim Gitzel, chief executive of Cameco, would soon deliver a fine piece of understatement by saying that the company believed “the risk to uranium supply is greater than the risk to demand,” given that nuclear plants worldwide have continued to operate through the pandemic, albeit in weakened electricity markets.

Most uranium market players seemed to agree. Having varied by less than 10% over the course of the last year, uranium spot prices jumped by 24% between March and April, reaching about $34/lb U3O8, according to price reports from Nuclear Intelligence Weekly. Hitting that four-year high was enough to make uranium one of the best performing commodities for the year to date, even beating gold during a stock market downturn that saw the Dow Jones lose 24% between mid-February and the end of April. The stock prices of the miners began to buck the downward trend as well, and Guy Keller of the Australian fund manager Tribeca said that a typical portfolio of uranium stocks would have to rise by 255% to match a $34/lb U308 price.

It is early days, but these signals herald the return of a migratory species seen only rarely in the nuclear industry ecosystem — investors. There are now thousands of new people investigating the uranium market and the workings of the industry. Investors take care to research their markets thoroughly. They will find that among today’s power sources, nuclear has unique qualities that are needed in the long term.

Even taking a conservative view, investors will note several positive signs indicating demand could get firmer still. The US Department of Energy’s Nuclear Fuel Working Group report recently made clear the extent of the decline from leadership the US has experienced in nuclear fuel and technology markets. This is well out of alignment with President Donald Trump’s stated goal to achieve ‘energy dominance’ — a characteristically bold drive to go ‘one up’ on boring old energy security. The report made clear that the US intends to support its current nuclear fleet and avoid any more preventable shutdowns, and invigorate the currently stale and underserved global market by reviving US state support for nuclear exports. There are more than 20 countries out there wanting to introduce nuclear energy, but little variety or competition in the offers before them.

It is clear to any researcher that steady growth in China will increase demand over the medium term, and will more than balance out closures in Western Europe. Of course, that centrally planned country has secured most of its supply of uranium and so does not need to play the global market. At the same time, for many miners the production of uranium is as a byproduct, or just one among hundreds of products. The market fortunes of yellowcake do not move the needle much for these firms, nor for China. As a small and specialist commodity, the dedicated market for uranium is smaller still — and tiny without Japan taking a full role. However, it is intensified by the fact there are only a few pure uranium miners out there being publicly traded.

Meanwhile, the supply side is disrupted and weak, due to years with little to no investment. New mines weren’t really needed while demand was soft post-Fukushima and there was a huge historical imbalance to be dealt with. According to the Red Book, worldwide annual expenditure on exploration and mine development fell from over $2 billion in 2014 to $664 million at the start of 2017.

But this was taking place on top of huge historical oversupply. It wasn’t until the 1970s that commercial demand for uranium began to pick up, but military demands had already scaled cumulative production to a level 15-20 years ahead of requirements. Only in the 2000s did that gap begin to gradually narrow as secondary supplies were eventually drawn down to reasonable levels. Nobody knows the true scale of secondary supply, but it is probably at its lowest level in the history of the industry.

Not only is the chronic oversupply situation is nearing an end, but it is clear from market analysis that demand is actually going to overtake supply in just a few years’ time. Even on the pessimistic appraisal of the World Nuclear Association’s ‘Lower Scenario’, nuclear power generation and therefore uranium demand is expected to maintain its current level. But a quarter of existing mines, including Ro¨ssing, Arlit and Ranger which together make up 10% of production, will approach the end of their productive lives before 2040.

Last September, James Nevling of Exelon who presented the report said, “In all scenarios, the industry needs to at least double projected primary uranium production by 2040.”

Taking a positive view just on China, if it continues to installing reactors by the dozen, it will soon exceed its uranium supply coverage and will have to start either buying uranium from the market or taking stakes in more mines. No wonder there is a sense of quiet confidence coming from uranium players now — the conditions are all there to create a price spike like those seen in 1976 or 2007.

Why have uranium buyers let the situation go so far and cause so much pain for miners, who they will have to deal with in future? All commodity markets are composed of antagonistic sets of buyers and sellers, with virtually zero solidarity for the fortunes of their industry overall. In this case, nuclear is not unique.

In fact, it is reassuring to see there is at least one market where nuclear energy companies behave like sharks and get what they want. Accordingly, having been hung out to dry for the best part of a decade, it is now miners who will feel fully entitled to sweep the floor.

While the junior players are itching to get active again, the majors, especially the few that are still able to meet obligations through inventory, have no incentive whatsoever to play nice as the market tightens. Some traders who forward-sold uranium for delivery next year may not have mined their commitment yet and could get caught out. I imagine the majors will benefit as much as they can from rising prices, while still keeping them low enough to prevent the juniors coming back too quickly - although some of the majors are low on inventory and cannot hold for out too long.

The scene is now set for some interesting years as nuclear fuel markets correct themselves, with this healthy chaos bringing investors and focused interest from financial communities. “Can you make money from nuclear power?” people are asking. And the answer is “Yes.”

Not only that, but you can make money from nuclear even if you don’t have billion dollars, or even a million, to play with. I’m personally excited that people are getting excited about nuclear energy again. Nuclear power just got some new advocates and allies.