Exorcise the cult of bad faith 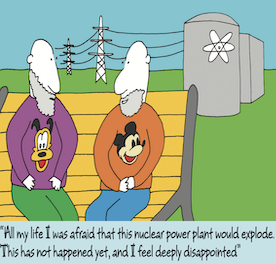 The clean energy debate is dividing into two groups — the serious and the unserious. But nuclear still has work to do to gain its place, says Jeremy Gordon.

AFTER THIRTY YEARS OF DISCUSSION and the blooming of a global industry of activists, advisors and think tanks, a reckoning is finally coming on who is serious about clean energy and who is not. Who is an active player in the collaborative process of building a future energy system, and who is impeding those in the first group from making faster progress?

This was signalled by the open letter to US President Joe Biden from environmental groups, which called on him to leave nuclear and CCS out of his proposed Clean Energy Standard. While old-school environmental giants like Greenpeace were among the 60 organisations to sign the letter, it was notable that rising forces in the climate movement, like Sunrise, were not.

The challenge for the nuclear sector in securing its place among the serious players is multifaceted. It has to make the case for its technology. It has to bring new technologies that are more readily deployable, buildable and affordable. It has to develop better economic models and master reliable construction methods. Nuclear power also has to invest as seriously in securing social licences — public confidence and political support — as it does in securing operating licences.

The unserious group includes the fossil fuel owners looking for a way to cling on, the renewable energy haters and the time wasters. Nuclear has to distance itself from them as much through positive action as by leaving a sanitary gap. And nuclear has to break free from the tactics of its opponents within the unserious group. I’m talking about the ones who say there is a climate emergency, but not enough of one to use nuclear.

Of course, no technology deserves a free ride and nuclear’s credentials do need to be presented. But by now nuclear’s carbon footprint has been endlessly shown to be low — in fact, comparable to wind and solar. It has also been endlessly shown that, all things considered, nuclear power is one of the safest energy sources, again comparable to wind and solar. There is still no functioning disposal route for used fuel yet, but it is easy to verify that it is properly managed. Arguments to the contrary were once appealing in public forums, but now have no impact on knowledgeable groups. ‘The science is clear’, as they say.

There are still many popular one-dimensional arguments for nuclear to be sidelined which point to simple facts and draw bald conclusions. One is that renewable capacity is cheaper to install, and therefore we should build that and only that. This ignores a plethora of issues involved in renewing the whole world’s energy system which make it much more difficult than simply building one or two technologies. Another is that nuclear plants take a long time to build, whereas renewables are fast, which ignores that we can do more than one thing at a time.

And who is ‘we’ in these arguments anyway? There is nobody in charge of this planet, only an anarchic throng of apes acting mainly in their own short-term interest. The fact is that some of these apes know how to build, operate and regulate nuclear power plants. Allowing them to use their talents would be a benefit to all the others.

As I have already stressed, the sector needs to invest very seriously in relationships that will win the trust and support of individuals and groups that hold negative views. It has to meet those people where they are and be honest with itself that sometimes they have very good reasons for their belief. At the same time, readers of NEI all know there are many people who will never stop opposing nuclear. Among that group it is getting harder and harder to reach for a good enough reason to support their view. The result is a parade of bad faith arguments.

Bad faith is a kind of deception. Someone gives reasons for their actions, but the results of those actions don’t align with their stated motivations. They usually choose false premises that give them a moral high ground and instinctive support from observers, especially ones without deep subject area knowledge. These folk avoid admitting they will never support nuclear, but manage to concoct reason after reason why it should be the last to be used and the least supported. Usually they are applying a standard to nuclear that’s not required for other technologies.

There are almost too many examples to mention but they normally take the form ‘Nuclear is okay, but issue X must be solved before we use it’. Or, ‘We should only use nuclear only after we have achieved all we can with renewables.’ These translate to: ‘We should use nuclear, but only after the climate has changed.’ Some climate emergency.

Some bad faith specialists use the tactic of ‘simply asking questions’ — a morally unimpeachable position that probes for any excuse to roll out their favourite conclusion or to dismiss their opponent’s argument. Another sure sign of a bad faith actor is showing no interest in solving the big problem they bemoan, be it waste, economics, safety, construction speed or what have you. One last giveaway is that bad faith actors who single out a flaw of nuclear as a reason to abandon the technology entirely seldom seem to apply the same criteria to other technologies.

I’m reminded of the grand project to build an artificial island for wind power in the Danish part of the North Sea. At DKK210 billion ($34.4 billion) for 3GWe of wind capacity it comes out more expensive to build than Hinkley Point C, yet would deliver only 90% of the power even on a good day.

It has all the megaproject risks and drawbacks of a huge nuclear plant, yet seems to inspire no animosity. Where are all the people who said the cost of Hinkley proves once and for all that nuclear is no solution to climate change? Seems they weren’t quite as motivated by value for money as they claimed.

Bad faith can become a way of life, for if you rely on bad faith arguments long enough you risk coming to believe your own words. In that way the French philosopher Jean-Paul Sartre defined bad faith as hiding the truth from oneself. That’s how some activists can spend a career fighting against a clean energy source that in fact presents a viable solution to the problem they say motivates them.

Bad faith can even become a career. The bad faith actor becomes so reliant on their habitual arguments and comfortable conclusions that they are unable of retiring them when they have been shown to be wrong. They don’t learn because they don’t want to. What a sorry life for an academic.

All this amounts to time-wasting, which the world cannot afford. As Brandolini’s law states, ‘the amount of energy needed to refute bullshit is an order of magnitude larger than to produce it.’ Should one make the mistake of engaging with bad faith, any error in the refutation creates the opportunity for the bad faith actor to not only restate their case but to expand it into a distracting diatribe.

While creating a suitable energy system for the future is an immense task, it can be tackled with one simple principle: every clean energy source needs to do its best. Where a clean energy source has a problem — be that intermittency, materials shortages, social justice or waste management — that needs to be fixed. There is no time for time-wasting bad faith from any party.

We must not credit bad faith arguments and actors with a response. The world is dividing into a serious group and an unserious group. Leave bad faith actors where they belong in the latter by making alliances that go beyond, around and above them. Call them out as unserious in the face of the global challenge they claim to be solving and move on.

And something that I have learned recently: no matter how infuriating bad faith tactics are, the best tactic is to ignore them. They are wasting their time and resources; don’t let them waste yours too.