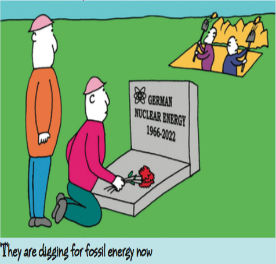 A recent international report says nuclear energy is part of the solution to the decarbonisation challenge. It will have no impact in Germany, where the nuclear phaseout is inching closer, but could this spur policy change in other nations? Jeremy Gordon discusses.

Sit down and shut up, they said, calling on their social media supporters to gang up and condemn the outsider who had spoken out of turn. The subject at hand was not his area of expertise, they said, and he should go back to his office and get on with doing his own job properly — i.e. according to their wishes and in favour of their interests — from now on.

You won’t be surprised to read that it had something to do with nuclear energy, nor that it had something to do with the notoriously weak date of 2038 that Germany has set to phase out coal. However, the person who pointed out that priorities on these matters “have been set wrong,” was Herbert Diess, the man who, for the last year, has been chair of the board of car giant Volkswagen.

“We will not reach CO2 neutrality if we do just a little bit of everything. Eating a little less meat; flying a little less on holiday; a little less driving,” Diess said told Tagesspiegel Background Mobilität & Transport. “It has to start with climate protection at the big levers — avoiding fossil fuels. Coal, oil, gas. Especially brown coal. You should’ve gotten out of coal and then nuclear power.”

I don’t know a lot about Herbert Diess, but I like him already. And the notion that he doesn’t know what he’s talking about is laughable. His company is the largest exporter in Germany. He probably knows a thing or two about energy, and also something about what makes Germany’s economy tick. And given that he was given control of VW to manage its recovery from the diesel scandal, I think he probably knows a thing or two about atmospheric pollution, too. He is not alone. In May, another industry figure, Wolfgang Reitzle, chair of the Linde engineering group, pointed out that closing down nuclear plants has done nothing for Germany’s power prices, energy security or climate goals. The country was going down “a ridiculous blind alley,” he said in an interview with Die Welt.

The angry response from commentators among the Green Party, the renewables industry and the domestic energy industry had more than a whiff of desperation. Their social media posts appealed to followers of Scientists for the Future and the children’s movement Fridays For Future to pile on Diess and blow up his phone with angry notifications, but to no avail.

It’s strange to think of the Energiewende — the ‘energy transition’ — as an incumbent, but that is the role its supporters are playing after a few years of calling the shots. They brook no deviation from the accepted wisdom of scrapping nuclear first, then coal, no matter how many uncomfortable trends emerge from the data to put its wisdom in doubt. Given time, all incumbents find their comfortable positions threatened. But for the anti-nuclear players in Germany the threat to their dominance comes simply from sober analysis of their own application of their own main policy.

There is no chance Germany will change course.

The Green Party may not be part of Chancellor Angela Merkel’s government, but it retains over 9% of seats in the Bundestag and it received 20.5% of the vote in the European Parliament elections in May. The power companies themselves have long given up hope of using nuclear in Germany or abroad. In the last few years they have restructured themselves to make as much money as they can out of the Energiewende, while designating fossil and nuclear assets as cash cows destined to be buried. That day will come for coal 16 years after it does for nuclear.

In 2019, German anti-nuclear activists are tantalisingly close to achieving the 2022 phase-out goal they wanted for decades and got into law in 2000. The environmental folly of their choices grows more obvious with every passing month. That is why they immediately sought to discredit Diess, close him down, and frighten off anyone else who might dare to point out the obvious. They wanted to stop the conversation before it could start.

I don’t believe the leaders of Energiewende’s coal- friendly strategy will be successful in suppressing the criticism they have earned.

Closing the last nuclear reactor in 2022 while coal units continue at full strength will be a huge embarrassment for Germany and that will not be lost on the member states of the G8, the UN and other international groups that set climate and energy norms.

Germany has residual power as a Green lobbying force, but opponents are speaking up. The results are shown in the open and equal discussions of nuclear energy in forums like the Clean Energy Ministerial (CEM) in Vancouver during May, and in sustainable development events by UN agencies. The International Energy Agency is the proud author of a report on Nuclear Power in a Clean Energy System.

Over many years the IEA had the reputation of being shy of talking about nuclear, its member states preferring it to leave analysis of nuclear energy issues to its sister organisation the OECD Nuclear Energy Agency. So the IEA report is a landmark in being only about nuclear energy, something that hasn’t happened in 20 years.

It delivered strong messages. First that nuclear energy is part of the solution to the decarbonisation challenge. It makes clear that lifetime extensions of existing reactors represent the lowest-hanging fruit for decarbonisation. No matter the low and falling cost of renewables, it is still tough to beat the value of simply maintaining an asset which is already bought and paid for. Second, IEA also said that with the right financial and market set-up, building new nuclear plants can be economic even though it remains very much on industry to get its house in order in terms of construction and on-time delivery. Lastly, the IEA said that renewables would have to scale at unprecedented speed if they are to replace nuclear.

These are not exciting campaign messages that spur immediate action, but they are noted, referenced and acted on in policymaking teams. They fertilise the ground and encourage analysts worldwide to come to accurate conclusions. They lead to awkward situations for those countries that are out of touch with the facts. In that sense they raise the possibility of policy change in several countries that have to make up their minds whether to maintain or replace nuclear fleets, including Japan, Belgium, Spain, the USA, the Netherlands, Sweden, South Korea and Taiwan.

Meanwhile, the general discussion on nuclear’s role will draw in enthusiastic new countries, advocates, NGOs and promising technologies. It will be more diverse, lively and engaging than ever before.

The wasteful closure of a world-leading nuclear fleet in Germany is a tragedy, but it looks set to deliver one public good: that even the most nuclear-agnostic commentators will want to condemn anti-nuclear policymaking. We should all stand up and speak up to secure better strategies in the future.