Energy to 2050 – can it fit in with environmental objectives? 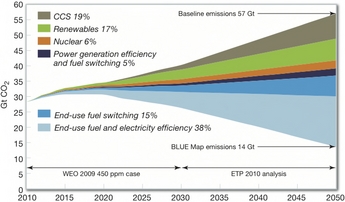 Successive editions of the International Energy Agency (IEA) annual ‘World Energy Outlook’ (WEO) have emphasized, with increasing degrees of concern, that the most likely energy scenario for the world is environmentally unsustainable. Given the expected population growth to 2030 and general improvement in living standards, continued dependence on fossil fuels will ensure that carbon emissions continue to rise sharply. Unless something changes dramatically, growth in both China and India is going to be based very much on the further exploitation of coal, oil and gas reserves. Apart from the environmental side, this will also bring with it important issues of resource depletion (particularly for oil) which will have both an economic and energy security of supply consequence. In the IEA’s reference (business as usual) scenario, nuclear experiences only a minor revival and the growth of renewable energy is also constrained by a mixture of economic and other factors, as exploiting abundant coal reserves provides the easiest route to growth.

The IEA has developed various alternative policy scenarios in WEOs to address these issues, but it is necessary to go well beyond the time horizon in these (to 2030) to investigate viable solutions. It takes a long time to change energy supply and demand. Investments made today lock in technology for many years in the future; the coal plants coming on-line China today will likely operate for many years. The period to 2050 is therefore more relevant. The IEA has recently launched a revised edition of its ‘Energy Technology Perspectives – Scenarios and Strategies to 2050’ (first issued two years ago). This offers a very comprehensive evaluation of all possible ways to make a serious dent in global carbon emissions while not curbing the rightful requirement of energy from the developing countries for rapid economic growth. It starts off by extending the WEO’s Reference Scenario from 2030 to 2050, but then develops a variety of so-called BLUE Map Scenarios that dramatically change the production and consumption of energy. The analysis is extremely thorough.

Key technologies for reducing CO2 emissions, according to the IEA BLUE Map scenario

The main BLUE Map Scenario has carbon emissions levelling off by 2020 but then declining by 50% from today’s level by 2050, to about 14 Gt of CO2 per year. The most interesting feature of this is the dependence on greater efficiency in power generation and use, including fuel switching. This accounts for 58% of the savings, with only 42% coming from more renewables, more nuclear, and by the widespread introduction of carbon capture and storage (CCS) where fossil fuels are still in widespread use. Nuclear accounts for only 6% of the savings, with global nuclear capacity rising to 1200GWe by 2050 from 375GWe today. There must be considerable doubt about the a mooted expansion of CCS that would be responsible for 19% of the carbon emission cuts by 2050, which is ahead of the combined renewables contribution. This is surprising, as at least several of the renewable technologies are technically well-proven (whether they will be adopted widely is another question entirely); whereas there must still be huge doubt about the ability of CCS to come in on such a massive scale. Although 2050 is a long way off, to depend so strongly on an unproven technology in a major scenario is risky, to say the least. It almost seems as if the IEA experimented with scenarios where fossil fuels played an even smaller role, decided that they were unrealistic, and then decided that they would have to be optimistic about CCS as a counter. Both renewables and nuclear advocates would strongly question this.

The report emphasizes that the answer to carbon emissions involves a huge number of solutions and that none should be ruled out—different regions of the world will adopt different options, but everything is needed. There are separate chapters on each of power generation, power network development, industry, buildings and transport, in all of which substantial changes have to come about. Power generation in the OECD countries moves completely away from fossil fuels by 2050. The trend within the transportation sector towards electrification implies that, despite all the efficiency improvements in all areas, electricity demand will continue to increase sharply (and this must be generated cleanly). Nuclear clearly has an important role to play here, whether it is batteries or hydrogen fuel cells that are adopted as the key technology.

There are also separate chapters on OECD Europe, the United States, China and India. In particular, the environmental risks of the rapidly rising car ownership in China and India are very challenging. On the other hand, the opportunities for bringing in modern home appliances with much lower power consumption are also important and can make a significant difference. It is important to demonstrate to the Chinese and Indians that they can still have rapid economic growth without necessarily wasting all the energy that the already developed countries did at the same stage of development.

The IEA has been progressively working on a series of ‘technology roadmaps’ for the key technologies and sectors (such as cement manufacturing, which is very energy-intensive); these are shown in the report. The nuclear roadmap was developed through discussion with various governmental and industrial bodies and highlights the need for stable governmental policy and regulatory certainty. It also emphasizes the need to develop electricity and carbon markets that support long-term heavy capital investment. The degree of technology development and capacity building required are comparatively low in nuclear, compared with the other roadmaps, making the point that the technology is already well-proven and has already been deployed on a large scale in particular countries.

The report ends with a couple of interesting new chapters. The first starts with the recognition that cutting carbon emissions ultimately depends on the up-take of low-carbon technologies by industry, businesses and individual consumers. To date, efforts to encourage the adoption of energy-efficient and low-carbon technologies have focused primarily on overcoming technological and economic barriers. In reality, however, a lot of research suggests that consumer choices are more heavily influenced by social and behavioural factors. What is needed is an improved understanding of the human dimensions of energy consumption, particularly in the residential and commercial sectors and in personal transport. This would help policy makers catalyse and amplify the more obvious technology-based savings. For example, individuals do not necessarily behave in a totally economically-rational way. Even when information on the costs and performance of technologies is readily available, people often do not consider this in their purchasing decision. This conclusion applies to decisions to buy residential solar units and personal vehicles. It seems that people do not consider expenditure on energy and energy-using equipment as an investment. Decisions are influenced by a variety of non-economic variables including structural and institutional factors, cultural values and norms, plus individual beliefs and attitudes. Programmes to encourage people to make a fundamental switch in their energy use must take account of this.

The final chapter focuses on what IEA calls the ‘environmental co-impacts’ of emerging energy technologies. This is an area very familiar to those well-acquainted with the nuclear sector, as the life cycle impacts of nuclear have been very well-studied over the years. The most obvious point is that low-carbon technologies also deliver substantial advantages in reducing air pollution. Indeed, in China and India, the main initial advantage of moving away from coal will be felt in cleaner city air. The current pollution levels give rise to thousands of premature deaths and other widespread respiratory problems. The ExternE project of the European Commission, which ran for more than 15 years beginning in 1991, provided a lot of interesting information and showed that exploiting fossil fuels has a lot of negative aspects beyond carbon emissions, while the nuclear industry has a relatively benign impact on the world.

The major issue that the nuclear sector still needs fully to address is the back end of the fuel cycle, where there are still substantial and difficult issues to solve on used fuel. The volumes involved are, however, very low. The point that used fuel can be stored for generations with little environmental impact, on the basis that they contain substantial perceived economic value, is gradually becoming accepted. The other area that has recently come up on nuclear’s environmental footprint is on the degree of water use. This does impose some limitations in the siting of plants, but is only one of a number of constraints, all of which can be overcome.

The creator of the Gaia Hypothesis, James Lovelock, essentially believes that Man has already damaged the environment to such an extent that it is too late to offer complete solutions. He is, however, a supporter of nuclear and other technologies that will at least make a dent in the problems we have created. It seems impossible now to prevent the planet getting generally warmer, with unpredictable localised climatic impacts, but we should clearly be doing all we can to limit the impacts—through limiting the expected rise to no more than 2 degrees centigrade, for example.

One danger of the IEA’s approach of ‘we need everything’ is surely that the complexity of the situation is so overwhelming that nothing much will get done and we will carry on much as before. A global economic downturn tends to encourage this tendency—there is so much else to worry about when people are losing their livelihoods that it is hard to concentrate on something that is clearly big, but some years away.

There is arguably a case for concentrating in each region on a small number of technologies and efficiency gains that are achievable rather than trying to hit the big target with so many separate approaches. This is where nuclear will have an advantage, if the challenges of the IEA roadmap can be overcome. It is a large-scale technology, capable of dealing effectively with a big problem. But it may not, for some years, be suitable for many countries that do not have the developed institutional framework to cope with it. Such a description must apply to most of the Middle Eastern countries currently looking at nuclear power. Maybe it would be far better for them to specialise in developing solar power and other renewable solutions, combined with developing their power grids to cope with diffuse and sometimes intermittent technologies. For China and India, however, huge quantities of power are already required and nuclear provides a good solution, both environmentally and economically. It is therefore a good sign that the nuclear programmes in both are now stepping up sharply—indeed most of the new reactors to be brought on-line throughout the world before 2030 are likely to be located here. Beyond then, nuclear can certainly become established in more of the developing countries, while the complete renaissance in the developed world should already have been proven.