East Asia – what do nuclear countries have in common? 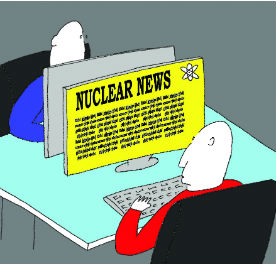 The centre of gravity of the nuclear world has moved to East Asia. China, Japan, South Korea and Taiwan, all large urban centres, use nuclear to reduce dependence on fossil fuels. But there are also key differences between their nuclear programmes. By Steve Kidd

Of the 66 reactors currently under construction worldwide, 32 are in China, Japan, South Korea and Taiwan. Western Europe and North America have only a few units under construction and closures have become a regular occurrence. It is interesting to examine some common features exhibited by the East Asian countries, and observe some substantial differences between them.

[Cartoon by Alexey Kovynev "You will not believe it! These Asian guys even have similar equipment issues"]

One obvious feature that Japan, South Korea and Taiwan have in common is weak domestic energy resources and dependence on imports. Nuclear power, which guarantees a huge amount of energy from a small amount of raw material, is clearly of advantage to these countries. Although they depend on imported uranium, supplies can be secured from world markets and strategic inventories held at relatively little cost. Nuclear power has therefore offered these countries better energy security.

The Fukushima accident in March 2011 has destroyed this in the case of Japan, at least until many of the operable but shut down reactors return to service (July 2015, 'Japan - what is the future for nuclear power'). It has not, however, lessened the Japanese government's belief that nuclearpower should remain an important component in the country's future energy strategy.

The substantial additional cost to Japan of importing fossil fuels (especially liquefied gas) to replace nuclear while reactors have been shut down is another important consideration. This has also been an important consideration attracting South Korea and Taiwan to nuclear. Without a significant nuclear share in electricity production, their energy security and their external payments would be much worse. The low share of fuel costs in nuclear power prices has stabilised overall electricity prices, which is important in any country with a developed economy. Depending more heavily on fossil fuels would have led to frequent periods of electricity price inflation, which is unwelcome both for consumers and industry.

China is in a rather different position regarding energy resources, and is at a different stage of economic development. Before they developed nuclear programmes, Japan, South Korea and Taiwan depended heavily on imported fossil fuels to stimulate the early stages of rapid economic growth. But China has access to substantial domestic coal resources. China's growth depended on building coal plants (and to a lesser extent hydroelectric stations) to generate electricity and nuclear has only recently become an important power resource (still only accounting for 2.5% of Chinese supply). The arguments for nuclear, however, echo those of the other three countries. Despite its resources, China is the world's largest importer of coal, and it does not want to depend on imported fossil fuels. Chinese economic development has been over-dependent on coal, but this is typical of countries in relatively early stages of development. This period of "dirty growth" with environmental problems eventually comes to an end.

An important feature of all four East Asian nations is the high density of population living in urban areas. This is a very recent phenomenon in China but the trend is set to continue as people leave the countryside. Such density of population requires large-scale generation which will produce power very reliably and without adverse environmental consequences. Although all four countries have invested heavily in renewable energy, it has limited value in cities where population density is so high. Producing relatively small amounts of intermittent power is attractive in less densely populated rural areas, but the need for substantial backup generating capacity means that renewables do not really meet the needs of these countries. They can certainly play a part in the power generation mix, but cannot supply the sheer quantity of electricity which is required on a reliable basis.

China still has substantial additional potential for hydroelectric power, which can provide huge quantities of reliable power. But although it is possible for European countries to envisage replacing fossil fuels with renewables, it is not viable in East Asia.

Another common feature of East Asian countries is rapid economic growth. Although with the exception of China this has now slowed markedly, these countries needed to build a large amount of power generation capacity. In each case, they were able to import nuclear technology from overseas and gradually develop their domestic expertise. Japan and South Korea have already become substantial exporters in the international nuclear market, where China is now rapidly emerging as another major player. In Taiwan the nuclear programme has been of a smaller scale and has not led to a vibrant export sector.

"Nuclear in East Asian countries has benefitted from state direction...from strong governments, which were certainly autocratic in the early stages of development but have gradually made the transition to more democratic societies"

Nuclear in East Asian countries has benefitted from state direction. Nuclear power programmes are difficult to establish and carry through to completion and the institutions in many countries cannot accomplish it. Political commentators such as Francis Fukuyama make the point that a strong, capable state is an important element in economic development and this applies whether or not the countries are democratic and have a developed rule of law. These East Asian countries have benefited from strong governments, which were certainly autocratic in the early stages of development but have gradually made the transition to more democratic societies. China has not reached this stage (it is possible that this may be delayed much longer) but the important point is that the state is capable of directing and stimulating economic activity, unlike neighbouring countries like Thailand and Vietnam which have had less economic success.

These four East Asian countries can also carry out large scale construction projects successfully. This started earlier with the rapid construction of roads, railways, factories and apartment blocks. The costs of building nuclear power stations in these countries are substantially below those in the western world. This reflects lower labour costs but must today have more to do with superior project management, and it has undoubtedly been founded in having a steady flow of orders.

Korean companies have been very successful in winning infrastructure orders overseas and this is now happening with nuclear, exemplified by four reactors for the United Arab Emirates.

Japan is the only country that has so far completed reactors that are rated as Generation III standard (four ABWRs) and these were built on time and budget. It will be interesting to see if Japan can achieve this at home and overseas after the damage wrought by the Fukushima accident.
China is having some teething problems with its initial Generation III reactors and its experience with low cost construction is now under some threat. The key feature would seem to be achieving some momentum in a construction programme and keeping it going.

Public acceptance is an area where the East Asian countries share experiences similar to the rest of the world. The earlier nuclear projects won support from the public but as time has gone on, they have faced increasing challenges. In Taiwan, the fourth nuclear project at Lungmen has been largely completed but cannot operate for political reasons. Japan obviously has severe public acceptance problems after Fukushima, while South Korea has had to handle a succession of scandals in the nuclear sector. Even in China, public acceptance is starting to emerge as an important factor in the nuclear expansion.

The strong arguments for nuclear outlined above have tended to mean that the populations have accepted the need for nuclear. In Japan, the government now have to reconvince the general public of this, but the economic arguments are very strong. In Taiwan, however, opposition to nuclear has become very well entrenched in the political fabric and maintaining the current six reactors in operation, let alone getting Lungmen up and running, will undoubtedly prove difficult.

In other areas, there is nothing particularly special in the East Asian experience. Each of the countries is taking its environmental and climate change commitments seriously, but these are unlikely to be major drivers of the push for more nuclear.

Finally, it is interesting to note the different corporate structures that have been adopted in the East Asian countries. In both South Korea and Taiwan each has a single nuclear power company, while Japan has ten regional nuclear operators. The eventual structure of the Chinese nuclear sector is uncertain, but most likely will evolve to perhaps half a dozen operators. In common with the remainder of the world, it appears that there are a variety of corporate structures which can support nuclear. Contrast, for example, France where all 58 units are operated by EDF, and the USA, where 99 units are operated by over twenty companies.

There are therefore some features that the East Asian countries have in common which are very relevant to their continued interest in nuclear but others in which they are not so different to the remainder of the world. Simple explanations for the progress of East Asian nuclear are insufficient. The important common feature within their nuclear programmes is capable government planning, with proven ability to carry out complex infrastructure projects. Nuclear is just one of several economic success stories. The countries need nuclear and have found the way to carry out successful programmes.