Creating a sun on Earth 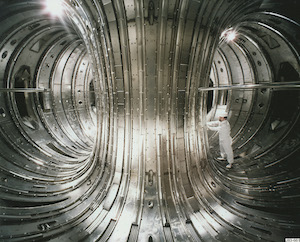 The Joint European Torus (JET) generated its first power using deuterium-tritium fuel in 1991. Thirty years later it continues to operate, having produced it 100,000th pulse in January 2022. By John Lindberg

The February 1992 edition of Nuclear Engineering International celebrated a significant research milestone within the world of fusion – the first significant amount of power ever generated from a controlled fusion reaction, some 2MW.

At 7:44pm on 9 November 1991, the Joint European Torus (JET) research fusion reactor successfully fused deuterium and tritium for the first time. This was the first of several records that JET would set, and the reactor is still going strong, serving as the testbed for its eventual successor, the 500MW ITER project, currently under construction in Cadarache in the south of France.

In January 2022, JET celebrated its 100,000th pulse. And in February UKAEA announced JET's most successful run to date which released 59MJ of sustained fusion energy over a five second period (averaging 11MW), beating the previous record of 21.7MJ set at the same facility in 1997.

JET, housed at the Culham Centre for Fusion Energy south of Oxford (UK), began operations in 1983. As its name suggests, it was, and remains to this day, a joint project under the auspices of the European Atomic Energy Community (Euratom). Over its lifespan, the Tokamak has undergone several upgrades and refurbishments (most recently in December 2020).

As the 1992 article highlights, the conditions inside a fusion reactor become some of the most hostile on the planet. There are extreme magnetic fields containing plasma which is heated to more than 100 million degrees Celsius. This is also where one of the major challenges can be found that need to be resolved before fusion power plants can spread across the world. Indeed, the materials challenge is considerable, with not only extreme temperatures, but also a considerable neutron flux that makes more material brittle. Whilst breakthroughs have been made at JET since the milestone in 1991, much work remains.

Nuclear fusion has for a long time been seen as a panacea to the world’s energy dilemma, but equally been the butt of many jokes (eg “fusion was 30 years away 30 years ago, and still is”). The latter is in many ways a testimony to the inherent difficulties associated with fusion. Equally, as I have previously argued (Pressuring Light Water?, June 2018) and elsewhere, it is important that nuclear innovators – and perhaps especially within the fusion community – learn their lessons from the past.

With projects of this international nature, complexity, and relatively scarce resources, it is crucial that design flexibility for commercial fusion plants is maintained, rather than prematurely locking in a specific design, discarding all others. By doing so, there is a considerable risk that a suboptimal reactor is chosen, which might cause untold harm to the nascent nuclear fusion industry. Indeed, some have argued that this happened to the nuclear fission industry in its early days.

Nuclear fusion can have an important role to play for the future energy mix of the world, but it is important to be realistic about its potential impacts in, for example, reducing greenhouse gas emissions for the 2050 deadline that most governments work towards.

Despite this, nuclear fusion can be a crucial component in the future energy mix as we look beyond 2050, and the many benefits of fusion – be it fuel abundance, its sustainable credentials, or its energy efficiency – makes it worthwhile to continue with the aim of creating a sun on earth.

NB: Any views or reflections in this piece are of the author alone and do not necessarily reflect those of any organisation or entity that the author is affiliated with.