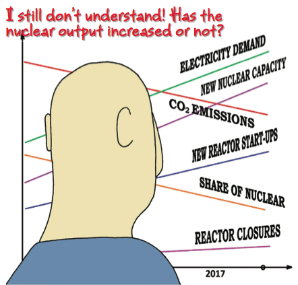 With fossil fuel use increasing and carbon emissions growing, Steve Kidd asks whether it is time to start adapting to climate change rather than trying to mitigate it.

I have prevIously argued that nuclear advocates are making a huge mistake in adopting climate change as the prime argument for a huge expansion of reactor construction (see also January 2015, ‘Is climate change the worst argument for nuclear’). My argument, controversial I accept, is that by so doing, nuclear will be marginalised as the industry effectively gets into bed with renewables, whose supporters will do everything to stop it that they can. Stating the obvious (i.e. all solutions are necessary to constrain carbon emissions) is not helpful when non- nuclear options continue to perpetuate the fear paradigm that bedevils nuclear. Far better to tackle the real issues.

The international climate change mitigation process is going nowhere when Germany – supposedly one of the leaders and the host of last year’s COP23 meeting in Bonn – is failing to cut carbon emissions. This is merely the tip of a much bigger iceberg.

The International Energy Agency’s (IEA) recent ‘Global energy and CO2 status report 2017’ set out the problem. Renewable energy grew in 2017, but global energy-related CO2 emissions grew by 1.4%, after stagnating for the previous three years. The reason was higher world economic growth, such that world energy demand increased by 2.1%. As in the past, most of it (72%) was met by fossil fuels, including oil and coal.

World electricity demand increased by 3.1%, significantly more than the overall increase in energy demand. China and India accounted for 70% of this.

Output from nuclear plants certainly rose by 26 terawatt hours (TWh) in 2017, as some new nuclear capacity saw its first full year of operation, but the number of new reactor start-ups only just exceeded the closures. The most significant part of the improvement came from Japanese reactors returning to service, something that will benefit 2018 too, given the recent upsurge in restarts.

The only way that the world can constrain emissions to levels urged by climate modelists is by going ex-growth. Almost 30 years after the United Nations established the two-degree threshold, over 80 per cent of the world’s energy still comes from fossil fuels, a share that has remained largely unchanged since the early 1990s. Global emissions and atmospheric concentrations of carbon dioxide continue to rise and climate policy, at both international and national levels, has had little impact on their trajectory. There is a large element within the environmental movement who do not like economic growth. Cocooned in their comfortable lives in developed nations, they seek to deny the same living standards to billions of people in the developing world.

Much of the opposition to nuclear in the 1970s came from people who realised that it could help the world to continue growing rapidly with very limited environmental consequences. Hence they promoted the idea that nuclear was dangerous and a likely accessory to weapons proliferation. Despite their denials, they are clearly acting against the interests of the world’s poor, by promoting a green future with renewables.

This world-view is now acting against the economic interests even of young people in their developed countries. They pay inflated prices for power to subsidise renewable power.

Climate change is a big issue and it seems certain that humans have at least a partial role in it. But it must be balanced against lots of other important issues. Bringing a degree of economic development to poorer countries inevitably involves exploitation of fossil fuels. Even if power can be brought to the masses in the form of renewables, applying wind and solar power to supplying raw materials for construction and industrial development will be difficult, if not impossible.

Energy transformations are not going to do the job their advocates suggest. Significant reductions in carbon emissions have been associated with a switch from fossil fuels to nuclear, hydropower or natural gas. One has to believe fairy tales about advances in battery technology to believe that countries will not discover faults with intermittent renewable power once its share of the power market reaches 20-30%.

This is prompting some reflection by people keenest on climatic salvation. One proposal, from Ted Nordhaus at the Breakthrough Institute is simply to abandon attempts to rein back warming to two degrees reducing emissions. (The calculation is that this requires the carbon level in the atmosphere to go no higher than 450 parts per million, and today it stands at 407 ppm, versus 275ppm prior to the start of the Industrial Revolution). Yet at some point over the next 20 years, we will almost certainly pass this level and the only possibility will be either to pull carbon out of the atmosphere at huge scale or alter the chemistry of the atmosphere so that rising greenhouse gas concentrations do not lead to higher temperatures. Scenarios that stabilise global temperatures rises at two degrees require negative emissions in the latter half of this century.

Incidentally, there is no guarantee that the chosen level of plus two degrees will avoid catastrophe for the world, nor does exceeding that threshold assure it. No one knows with much precision what the relationship will be between global temperature and the impact of climate change at local and regional levels. Nor do we have a particularly good handle on the capability of human societies to adapt to those impacts. Lower increments to the temperature are invariably more favourable for mankind but we are unsure where the boundaries lie.

Abandoning an unrealistic target would do a lot of good. Some significant level of future climate impact is probably unavoidable. Sustaining the fiction that the two-degree target remains viable risks leaving the world ill prepared to mitigate or manage the consequences.

Adaptation brings difficult trade-offs that many climate advocates would prefer to ignore. By and large, the faster poorer nations develop the more resilient they will be to climate change. But that development in most regions still entails burning fossil fuels. Housing, transportation networks and the like makes people resilient to climate and other disasters. That requires lots of steel and concrete, which is difficult without fossil fuels. Yet the World Bank and other international development institutions now decline to finance fossil fuel development, which directly acts against the interests of developing countries.

Given the availability of lots of unconventional shale gas around the world, and the development of a more internationalised gas market with lower prices, the pragmatist would suggest that using a lot more gas would be a good way to curtail emissions. Gas is much better than coal from the emissions standpoint (although there are some concerns about methane emissions from wells). Most environmentalists are, however, set against the use of any fossil fuels.

There is strong opposition to abandoning the two- degree target. Some still insist that with sufficient political will, the target can be met, but this looks a forlorn hope. Others recognise that although the goal looks unachievable, it may motivate the world to reduce emissions further and faster. Abandoning it would simply be giving up. Others rely on technical solutions appearing suddenly to buy more time.

The question is why the nuclear sector would ally itself with the well-off in developed countries, who are unwilling to do enough to solve the problem and now seek to deny development to the rest of the world?

The nuclear industry is also full of people keener to promote their own technical solutions rather than do anything serious about climate change, energy security or cheap power. The industry’s conservatism and the way it is structured could be perceived as designed to ensure its failure (see March 2017, ‘Nuclear power – how to reboot and drain the swamp’).

The reality is that decarbonisation is very hard, as fossil fuels continue to bring benefits to most people despite the significant environmental consequences. The alternatives have improved, but not enough to displace fossil energy at scales consistent with stabilising temperatures.

Climate policy and advocacy has always been predicated on the idea that climate change was a problem that could be solved. It is, however, now a permanent feature of our world. It must be managed, as it is highly unlikely to go away. Nuclear is ‘hitching a ride’ on the issue when the industry should be expending more effort on emphasising the other advantages of nuclear.

One interesting final observation is that the parties who care least about climate change tend to be those who are most favourable to nuclear power. This may now include the Trump Administration in the USA, although it has so far failed to take much action. The USA tried to support both coal and nuclear power at the Bonn talks in 2017, but this proved difficult.

Nevertheless, there is a case for nuclear advocates to try to build bridges with fossil fuel interests, on the basis that they are going to be around for a long time and talk of big energy transformations may be an oversell. Past enmity should be put aside to support continued economic growth at reasonable energy prices, with plenty of room in the market for all.

Steve Kidd is an independent nuclear consultant and economist with East Cliff Consulting.