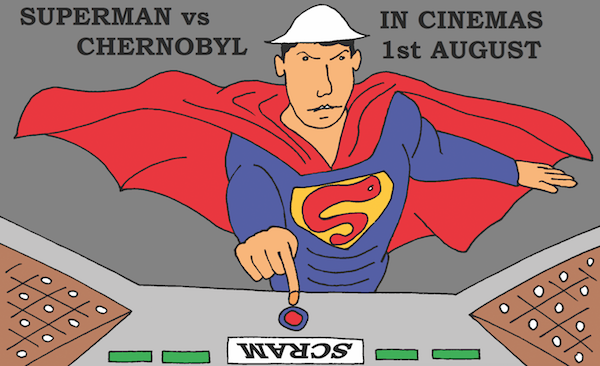 Several times over the years I have heard nuclear industry colleagues wish for a TV soap opera to feature nuclear power in a tangential way. Without going for the obvious drama of nuclear safety scares, the simple presence of one or two characters associated with the plant could highlight the humanity of the workers in the industry as well as their discipline, motivation and morality. Well, instead of that, they got HBO’s Chernobyl.

After 33 years of answering questions about this accident, I don’t think industry can be blamed for expecting the show to be a hatchet job, or of being bemused by the revelation that the writer and producer Craig Mazin is actually in favour of nuclear energy.

Despite Mazin’s excellent production and gripping storytelling we can find some fault. Perhaps it was artistic license, or perhaps it was true to the heat of the moment, but parts of the dialogue seem exaggerated. Uranium as a bullet that never stops firing? A potential second steam explosion on the scale of a nuclear bomb? Could the fire in the reactor really have poisoned and killed all of Europe? I’m doubtful. And choices in the representation of radiation and contamination leave you wondering whether the producers know that radiation is not infectious.

But one thing becomes clear as you watch. This programme is certainly not a hatchet job on current nuclear power; it is an excellent dramatisation which has caught the public imagination like nothing else. And at that point I lose interest in factual quibbles and look back to industry.

I was only nine years old when the Chernobyl accident occurred and if I hadn’t found a career in nuclear communication my best information on it probably would have come from reading the Wikipedia page out of morbid curiosity. Now the realities of the accident have been vividly visualised for millions of people for whom Chernobyl had previously been little more than a scary word.

Fascinated for the first time by the concepts of nuclear power, radiation protection and health effects, Chernobyl viewers have been engrossed by an extended explanation of how an RBMK reactor actually works. They have been talking about it and have scoured the internet to cross check their understanding of the event.

The quality of this show and its enormous international audience means that our collective memory of the accident is being re-written. Millions of people are experiencing Chernobyl anew, and as a human drama rather than a pithy Greenpeace slogan. The popular Chernobyl narrative is changing from 'Once there was a nuclear plant so bad that it blew up' to 'The Soviet system was so bad it made a nuclear plant blow up'. One key difference is that the nuclear plant itself is no longer the primary villain but actually one of the victims: It deserved better from its operators, its managers and its governors.

What is industry doing to help shape a new popular narrative around Chernobyl? I'm sorry to say that the answer seems to be very little. Has it told its own Chernobyl story – of how it vowed 'never again' and undertook difficult, systematic work to keep people safe by ensuring that nuclear reactors worldwide get the respectful management they deserve? Not yet. Will it change its mind in time for awards season, when Chernobyl is guaranteed to sweep the board? I remain hopeful.

If there were to be a second season of the Chernobyl story, it could naturally continue to place nuclear scientists and engineers in starring roles, beginning with a man well known from Season 1, Valery Legasov of the Kurchatov Institute. It could go something like this...

We begin again with Legasov, expelled and ostracised by the Soviet system, speaking into a tape recorder. His Testament would elucidate the major problems. That the RBMK design was woefully deficient by the USSR’s own standards, which simply were not followed. That as more plants were being built, operational qualifications were declining and engineers had become uncritical of the technology. This did not just apply to reckless operators like Dyatlov, but engineers at all levels of the Soviet nuclear establishment. Faults could fester, Legasov says, because there had been no comprehensive work to identify all the things that could go wrong and analyse them in detail — conducting what today’s engineers would refer to as a ‘stress test’. Design issues were not addressed promptly, and most heinous of all, the positive scram effect had been seen at other RBMK units but nothing had been done.

In short: all the knowledge needed to comprehensively avoid the Chernobyl accident resided within the Soviet Union’s nuclear industry, yet lay dormant and never produced any kind of corrective action. The morning Legasov kills himself is the day before his conclusions are to be published, and the day after the second anniversary of the accident.

Like the causes of the Chernobyl accident, the answers to the questions of ensuring global nuclear safety were already known in the community of nuclear technicians.

For several years the members of the Institute of Nuclear Power Operators (INPO) in the US had been sharing operational information and experience and conducting peer reviews of one another’s plants.

Perhaps by provenance, the impulse for privacy and secrecy in nuclear energy is strong. INPO overcame it by creating a circle of trust between the competing operators, none of whom were keen to blunder into an avoidable core melt situation as had taken place at Three Mile Island in 1978. The chilling effects of ratcheting regulation, spiralling costs and public mistrust were well known to them, and they wanted no more of them.

A tough form of self-regulation had been their answer, and after Chernobyl the world prepares to follow suit.

One major character would be Hans Blix, head of the International Atomic Energy Agency, whose tour of the Chernobyl site is hailed as a Cold War breakthrough. “Never again,” says Blix. We must not allow an accident on this scale to occur. With continent-wide impacts and global ramifications, “an accident anywhere is an accident everywhere.” He fights cleverly and with genius diplomacy against the headwinds from the Soviet Union to produce a better Chernobyl report. He works for years to bring in the Convention on Nuclear Safety and the Convention on Early Notification of a Nuclear Accident.

The show would follow champions of industry fighting and winning internal battles in their national establishments to realise the vision of a global version of INPO, which would be called the World Association of Nuclear Operators. In partnership, these two begin to focus exclusively on the safety of operation. They reduce controversy, gain access and focus resources by leaving technology and design issues to national regulators who now exchange experience through the IAEA.
INPO and WANO grow to be the largest and most powerful of the nuclear industry bodies, counting every operator as a member and dominating collective spending. In this community of nuclear safety Hans Blix’s words gain a counterpart: “A single accident, anywhere in the world, would mean the end of nuclear power.” Therefore, safety must be the absolute priority — the benchmark for virtually all decision making.

The world moves on, but as Three Mile Island had chilled nuclear development in the USA, so does Chernobyl in Europe. One pioneer country, Italy, quits the industry. Another of the strongest nations, Germany, turns its back on nuclear forever and vows to kill it worldwide. Across Eastern Europe projects backed by the USSR stall for decades.

Further from the accident scene, the effect is smaller and resource-poor nations in Asia continue to pile in to nuclear energy. Japan and South Korea grow their economies through the 1980-90s with expansions of nuclear power.
Early into the 21st century wealthy utilities are thinking about replacing the older units in the US and European fleets. At the same time China is finding its feet in nuclear and beginning to push through what looks like a bigger commitment than nuclear energy has ever experienced. There are now over 430 reactors in operation with more than one hundred others at various stages of planning. New reactor designs available to order promise to elevate safety to new heights. They call it a renaissance and hope that targets for reducing carbon dioxide emissions will spur a real return to positivity around nuclear.

The self-regulation system of hundreds of peer reviews is functioning well. With many more reactors in operation than ever the collective stock of experience is now vast and all of it is being shared globally. The result is fewer safety related incidents and higher performance than ever, which translates to profitable operation in a virtuous circle.
Companies continue to commit many millions in research, development, training and travel budget to pursue the safety mission. They are mindful not to allow the acceleration of the industry to stretch safety commitment and see qualification levels slip.

Perhaps in the final episode of Season 2 a peer review team could be touring a large power plant on the Pacific coast waterfront. The US operator present might have in mind that the terrorist attacks of 9/11 had prompted their plants to install additional power supply gear at a second location. The Swedish operator might have asked about procedures to relieve pressure, in comparison to their own plant’s automatic system. In future, one former manager of the plant would tell a conference that it never crossed his mind that water might breach its sea defences.