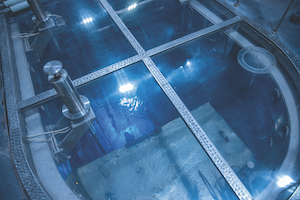 After 40 years of progress in improving efficiency burn-up is firmly back on the agenda as the industry explores new kinds of reactors and new kinds of fuels.

Back in the summer of 1982, Peter Lang gave readers of Nuclear Engineering International a detailed overview on the efforts in both the United States and Europe on improving the fuel burnup for light water reactors, as well as the expectations for R&D and implementation by various utilities. Today, 40 years later, I ask the question – where are we now? What predictions came to pass, and which ones failed to materialise?

But before we do, a quick refresher to those of you (including yours truly) on what burn-up even is. Simply put, it is a question of how much of the energy found in nuclear fuel is being extracted, making it a measure of efficiency. The longer the fuel stays in the reactor, the higher the burn-up, which also results in the fuel being physically warmer as well as more radioactive.

One of the key predictions made was a large number of utilities in the United States and Europe would implement extended burn-up in their reactors, and this is overall something that did come true, with the push to achieve greater burn-up rates having proven to be a success. In comparison with 1982, the average burn up rates throughout the global nuclear fleet have increased significantly. The US Nuclear Regulatory Commission estimates an increase of almost 30%, but when comparing current figures with data from 1982 the average burn-up has increased by at least 50%, and the maximum burn-up rates have increased by more than 100%.

Most of the motivations for achieving higher burn-up rates back in 1982, such as reducing the amount of nuclear waste generated and improving nuclear power economics – with greater use of the purchased fuel and fewer refuelling outages – still hold true today. But, as avid readers of this column will know, the issue of potential fuel scarcity is no longer a source of concern. It is interesting to note that the 1982 article refers to extensive recycling plans in many countries as a factor that would remove the need for higher burn-up rates, but this clearly has not come to pass, outside of predominantly France and Russia.

On the technical side, in the 1980s discussions were largely focused on the move beyond just looking at how longer fuel cycles would impact the fuel rods, but rather looking at how it would impact the reactor as a whole. Indeed, the article highlighted that the experiments conducted on fuel integrity in the late 1970s and the first two years of the 1980s had yielded very positive results. Whilst burn-up rates have increased dramatically since then, we see no corresponding increase in fuel failures, which 40 years late certainly does show that those early findings still hold true.

Turning our gaze to the future, we see that with the increased interest in so-called “accident tolerant fuels”, burn-up is back on the agenda. Various vendors and reactor operators are already exploring whether it would be possible to increase the burn-up limit from approximately 60 gigawatt-days per metric ton of heavy metal (GWd/tHM) – the rather clunky-sounding way burn-up is measured – to 75-80GWd/tHM. The development of more effective and efficient reactors that use a greater amount of the uranium in fuel is obviously entirely in line with the ethos of the circular economy, especially if the recycling of nuclear waste is not considered. However, the question of material stewardship is one that is likely to get bigger, and whilst increased efficiency is very positive, it is nevertheless crucial that the nuclear industry does not forget some of the original plans it possessed with regards to recycling. It’s true that the financial incentives for recycling currently do not exist in most countries (not to mention the regulatory frameworks required). This is definitely something that must be considered as part of the commitment to create an industry with a(n) (even) smaller physical footprint. But until then, let’s make sure to burn that uranium as well as we can!

Image: Fuel burn up rates are a key measure of reactor efficiency