Bringing radiation down to earth 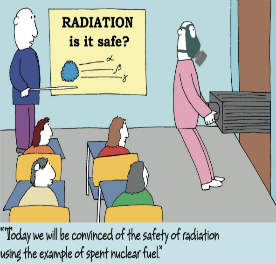 If I had a dollar for every time I had heard ‘We need to educate the public’ I would have more than enough to do something about it, says Jeremy Gordon.

TIRED OF BEING MISUNDERSTOOD BY the public and rejected by policymakers, industry leaders have called for public education on nuclear at virtually every conference I have ever attended and they continue to do so. In the past I would get excited that something might, you know, actually happen. Now, I’m of the mind that education is not the answer most people think it is and would be highly likely to backfire.

It is perfectly true that the public image of radiation is something mysterious and hard to understand — perhaps even impossible to understand. I don’t really blame people for thinking that. After all, they know almost nothing about it so what else would they expect? But an industry intervention to debunk common misunderstandings and insert a framework of facts has never been, and will never be, enough. The only effective way to educate our way out of radiophobia would be to focus on schools and to maintain serious educational programmes across many years, across multiple generations.

I was astonished when I discovered that at the time of the Fukushima accident, radiation had not been part of the curriculum for Japanese children up to year 12 for over 30 years. Some people had formal education on the subject, if they had chosen to pursue a scientific path, but the mass of the population had received none at all. Neither had their parents. What chance did people have when radiation suddenly became incredibly important to their life decisions?

Don’t forget that decision makers up and down the political system were in the same position of ignorance.

So the line between trained experts and everyone else in the aftermath of the Fukushima accident was stark, making it harder to use scientific facts effectively — facts that generally do not work anyway when trust is gone. It is concerning to wonder how many other countries might be in the same critically unprepared situation at this moment.

When members of the public feel they are at risk from your activity — even if the risk is slight — the power imbalance makes them think that their anxiety is justified.

And the imbalance grows if a ‘remote’ expert tries to educate them.

Nuclear operators make a commitment to behave properly and not to let the public down. They need to be considerate of people’s needs and vulnerabilities. This empathy sits poorly with a factual education campaign launched by industry interests. Worse, because radiation is uncanny, trust is had to build because experts are often seen as hubristic.

Facing those trust challenges, focusing on delivery of education via facts is a poor approach which can have many negative effects: If the information is far from a person’s existing belief it can make them take a stand and be even more sure of a wrong idea than they were before. In that situation people often reject the messenger as well as the message.

Why am I talking about trust again? Because it is one of two important keys to education. Ask yourself: would you take on board facts and figures about something hazardous from someone you didn’t trust? Trust prepares the audience to accept more of the facts that are already out there, and it prepares them for times when facts become important. The problem is, industry doesn’t really have trust.

The other key to education is consent. Without it, delivery of information is little more than hectoring, persuasion or propaganda.

Where do people explicitly give their consent to be educated and place their trust in the educator? The answer is elementary: in school.

The most powerful example of the influence of schooling is the inclusion in the German curriculum of Gudrun Pausewang’s frightening anti-nuclear children’s novel Die Wolke – translated as The Cloud, or sometimes as Fallout. Ostensibly it is used to illustrate how people and society behave in crisis situations, and is for children of a similar age to the 12-year-old protagonist. It also leaves most German citizens with a deeply engraved fear of nuclear power. Here are two quick online reviews: “One of the most shocking stories I’ve ever read. Because the scenario is so real and so possible,” and, “Ever since I read this book, I am terrified. If what happened in Fukushima hasn’t opened your eyes yet, this book will.”

(I admit I have never read Die Wolke. My sanity was saved when my copy disappeared in the post.)

Governments that think nuclear is part of their country’s long term future need to put real knowledge about radiation on the regular curriculum before children begin to specialise. Radiation has to feature alongside subjects like electricity, sound, light and magnetism in general science lessons. Only by taking the time to explain the subject properly with real demonstrations — by a teacher in a normal classroom without significant safety gear — can radiation be brought down to earth.

Expert organisations in the public and private sectors should create lesson plans and materials, train teachers, and get demonstration kits and to every school. It would be a formidable undertaking, not least because doing it properly means making it a long-term effort, but that is what is needed if we are serious about ‘educating the public’.

There are some great initiatives out there already. The American Nuclear Society teamed up with the Discovery Channel’s ‘Discovery Education’ brand to launch the Navigating Nuclear programme for middle schools, with an impressive number of industry and government sponsors. In Canada, a number of Canadian organisations work to improve energy literacy with supplements to the school curriculum via a programme called Teachnuclear, with 19 lessons of really vibrant content.

Focusing on teachers is another good approach. The Saskatchewan Mining Association arranges for teachers to visit mines, including those producing uranium, and the Brazilian sector association ABDAN recently arranged three days of free teacher training.

These are just a few excellent initiatives and I’m sure there are more, but in this call for nuclear education we need more ambition. The scale of the problem demands efforts like these be made in every nuclear country, as well as every nation bringing in nuclear.

Industry’s role is clear. Companies that generate a lot of income from nuclear power and consider it a part of their future must to re-invest proportionally to make sure the sector’s prospects are not limited by mythology and misunderstandings. Every nuclear operator has to maintain a busy visitors’ centre, while associations and societies need to work with schools to make sure every child has visited a nuclear plant. That would be an experience most children would remember for the rest of their lives, and most of them would remember it as being pretty cool.

Year-on-year these efforts can build a population of people with an increasingly balanced view of radiation and nuclear power’s place in the world. Sensational and negative ideas will persist in media and public discourse, but they will fall in influence as better educated generations rise.

Public education on nuclear and radiation is a fantasy that will never work while the nuclear sector lacks the trust and consent of its intended audience. The only way to make a dent in the mythology around radiation is to make a focused and funded effort for better education in schools. This calls for much more than a nice new mythbusting website or social media campaign. Making a difference here means a multi-year commitment: industry leaders need to stop calling for education and start paying for it.