Brazil – where is it going in nuclear? 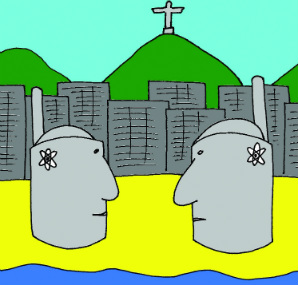 As we saw last month, Brazil has followed the typical overall trend of nuclear worldwide. A reactor programme was started many years ago, but for one reason or other it was stopped at an early stage of development, to be followed by a long period of little activity in the industry. Brazil is still a developing country today, but is a huge one (200 million people) where economic performance has, until very recently, been rather good. With rapidly rising power demand, it is once again clearly a significant potential market for new nuclear reactors.

Today nuclear energy provides about 3% of Brazil's electricity, although it also imports a significant amount of electricity from neighbouring countries. The country is rather over-dependent on hydro power; this constitutes up to 90% of total generation. There are indeed still further potential huge hydro projects in Brazil and nearby countries, but these are located well away from the major electricity demand centres. Although some of these will no doubt be developed, the heavy dependence on hydro gives rise to significant climatic vulnerability for the grid; this is now driving policy to diminish dependence. There have been worries about the level of water in dams in recent years, with fears of embarrassing power cuts during the forthcoming football World Cup (2014) and Olympic Games in Rio de Janeiro (2016). About 20% of electricity is from state-owned utilities, and the rest is from privately-owned companies. No private investment in nuclear power is allowed, though this is now under review.

[Cartoon by Alexey Kovynev "We have everything here in Brazil - uranium mining, enrichment, and fuel fabrication factories. But all the same I don't feel myself fully happy."]

In 1970, the Brazilian government decided to seek bids for an initial nuclear plant. The turnkey contract for Angra 1 was awarded to Westinghouse, and construction started in 1971 at a coastal site between Rio de Janeiro and São Paulo. Angra 1 didn't commence operation until 1982 but, in the meantime, in 1975 the government adopted a policy to become fully self-sufficient in nuclear technology and signed an agreement with (the then) West Germany for the supply of eight 1300 MWe nuclear units over 15 years. The first two (Angra 2 and 3) were to be built immediately with imported equipment, and the rest were planned to have 90% Brazilian content under a technology transfer agreement. To develop this, state-owned company Nuclebras was set up with a number of subsidiaries focused on particular aspects of engineering and the nuclear fuel cycle.

Brazil's economic problems at the time then meant that construction of the first two Brazilian-German reactors was interrupted, and the whole programme was reorganised at the end of the 1980s. In 1988, a new company, INB, took over the front end fuel cycle subsidiaries of Nuclebras and responsibility for construction of Angra 2 & 3 was transferred to the utility Furnas. Construction of Angra 2 resumed in 1995 and soon Eletronuclear was created to be responsible for all construction and operation of nuclear power plants. Heavy equipment manufacturing remains the responsibility of a company called Nuclep and both it and INB are effectively subsidiaries of the National Nuclear Energy Commission (CNEN), which reports directly to the Ministry of Science and Technology. The power company Electrobras, which owns Eletronuclear, comes under the Ministry of Mines and Energy.

Angra 1 suffered continuing problems with its steam supply system and was shut down for some time during its first few years after commissioning in 1982. Its lifetime load factor over the first 15 years was only 25%, but since 1999 it has been much better. Civil works on Angra 2 actually started in 1976 and, due to a lack of financial resources and a lower than expected growth in demand, it only commenced operation at the end of 2000. Angra 3 was designed to be a twin of unit 2. Work started on the project in 1984 but was suspended in 1986 before full construction began. Around 70% of the equipment was then kept in storage on the site for many years.
In November 2006, the government announced plans to complete Angra 3 and also build four further 1000 MWe nuclear plants from 2015 at a single site. The Angra 3 construction approval was confirmed by Brazil's National Energy Policy Council in June 2007 and received Presidential approval in July. Eletronuclear signed an industrial cooperation agreement with AREVA, confirming that AREVA will complete Angra 3 and be considered for supplying further reactors. A construction licence for Angra 3 was granted by CNEN at the end of May 2010, and construction resumed in June. The plant was originally scheduled to come into operation by the end of 2015, but this is now impossible and a much later start-up date is expected. A lot of the skills and experience from Angra 2 have now lapsed and Brazil needs a lot of help from AREVA and other outside companies; some pessimists believe that it may take until 2020 before the reactor comes into operation.

Although power from existing nuclear plants is believed to be about 1.5 times more expensive than that from established hydro generation, and power from new reactors more than twice as expensive, this price level is about the same as that from coal and cheaper than that from gas. So building new nuclear plants makes good economic sense if the objective is reducing dependence on hydro, while also avoiding carbon emissions. Eletronuclear has proposed building two or more reactors at various new sites in the northeast and also near Angra in the southeast. Initial siting studies are well underway, but the timing of these new projects is very uncertain, as is the choice of reactor technology. There is substantial public opposition to nuclear in Brazil and the strong and consistent level of governmental support that is necessary for a new nuclear programme (beyond Angra 3) remains in doubt. In terms of technology choice, Eletronuclear has been looking at the Westinghouse AP1000, the AREVA-Mitsubishi ATMEA1 and Atomstroyexport's VVER-1000. However, funding is likely to be a problem, and in May 2012 the government said that construction of any new plants would not commence until after 2020. Rosatom has offered to consider a build-own-operate (BOO) project (as in Turkey) but the main requirement is sustained commitment from the top energy planners and the Brazilian government.

Beyond the reactor programme, Brazil has significant capabilities in the nuclear fuel cycle. As a result of active exploration in the 1970s and 1980s, Brazil has known resources of 278,000 tonnes of uranium, or about 5% of the world total. The three main deposits are at Pocos de Caldas (Minas Gerais state) where a mine closed in 1997, Lagoa Real or Caetite (Bahia state) where a mine has operated since 1999 and Itataia, now called Santa Quitéria (Ceara state), where phosphate co-product production is planned. Uranium production in Brazil has, however, never reached anticipated levels and production in recent years (from Caetite) has been in the range of 150-350 tonnes per year. INB intends to double production there by 2015, while also starting to recover uranium from phosphate mined at Itataia/Santa Quiteria. This project comes from an agreement with fertiliser producer Galvani; the mine could produce over 1000 tonnes of uranium per annum, given the right market conditions. But uranium production in Brazil has also suffered from a number of technical difficulties and environmental concerns, so achievement of plans is always very uncertain.

All uranium mined in Brazil has been used domestically; indeed it is currently illegal to export it. This has constrained cooperation with international uranium companies. Until foreign investment is allowed, it remains unlikely that much of Brazil's extensive uranium resources will be developed. Production may rise to 500-750 tonnes per annum to satisfy the needs of Angra 1-3, but increases beyond that will require either additional domestic reactors or a change in government export policy.
Although uranium conversion and enrichment have been sourced abroad, in the early 1980s the Brazilian navy started a nuclear propulsion program and undertook the development of centrifuge enrichment. A demonstration plant was built at the Aramar Experimental Centre in Ipero (São Paulo state), which remains essentially a naval facility to provide fuel enriched to around 10% for a long-anticipated nuclear submarine programme. Using the enrichment technology developed at Aramar, an industrial enrichment plant was then planned at Resende (Rio de Janeiro state) to cater for the Angra reactors. Operation commenced in 2009 and it produced 730 kg of 4% enriched uranium in that year. This plant was expected to be able to produce most of the fuel needs for Angra 1&2. Eletronuclear signed a contract with INB for Angra 3 fuel. Expansion of the plant will take capacity to 200,000 SWU, but that amount is still less than half of that required for annual reloads of all three Angra reactors. The centrifuges are domestically-developed and essentially similar to Urenco's technology.

INB also has a fuel fabrication plant designed by Siemens, also located at Resende, with capacity of 160 tonnes per year of pellet production and 280 tonnes per year of fuel assemblies. This should be able to cope with the requirements for all the Angra fuel and also, eventually, for any subsequent reactors (dependent on type; if Russia is the vendor for subsequent units, the fuel fabrication may, initially at least, be sourced from Russia).
CNEN is responsible for management and disposal of radioactive wastes. Legislation in 2001 provides for repository site selection, construction and operation for low- and intermediate-level wastes. A long-term solution for both is to be in place before Angra 3 is commissioned. Used fuel is currently stored at Angra pending formulation of policy on reprocessing or direct disposal.

CNEN's Directorate of Research and Development (DPD) is responsible for all fuel cycle, reactor technology, radioisotopes, and related R&D. Five nuclear research centres carry out various R&D work. At the IPEN research centre in São Paulo, there are two research reactors (including a 5 MW pool type reactor) and a cyclotron, with radioisotope production. In May 2013 Argentina's INVAP was awarded contracts to build research reactors in both Argentina and Brazil, with Australia's OPAL reactor being the reference design for both. The two reactors will be used for the production of medical radioisotopes, as well as irradiation tests of advanced nuclear fuel and materials, and neutron beam research. The research reactor project is part of the growing bilateral cooperation in nuclear energy between Argentina and Brazil. Brazil, like Argentina, has renounced development of any nuclear weapons. A Brazilian-Argentine Agency for Accounting and Control of Nuclear Materials (ABACC) was set up, and has applied, full-scope safeguards under IAEA auspices since 1994.

Brazil's future nuclear construction plan essentially depends on parliament. The long-term plan for the country to have eight more nuclear units (beyond Angra 3) in operation by 2030 hinges on getting the necessary political approval. There is a possible change of government after elections in October 2014, but the dependence on hydropower continues to worry, and the nuclear lobby in Brazil is trying hard to promote more rational and consistent national energy planning. Given Brazil's size and potential economic development, it certainly could have a significant future reactor programme backed by a high degree of local content in both the supply chain and fuel production. But getting to this position will be very challenging. It will require changing past patterns of inconsistency in political support. It will also require continuing economic growth. The completion of Angra 3 is clearly an important milestone, but proper planning for further units needs to continue at the same time.