Bill Gates has entered the chat 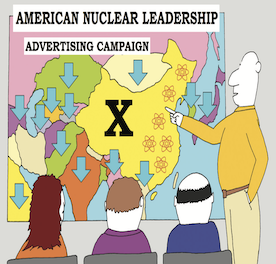 Nuclear power and now the nuclear industry have attracted the attention of billionaire business magnate Bill Gates. Could it mark a turning point for America’s leadership in nuclear? By Jeremy Gordon.

I STRONGLY BELIEVE THAT NUCLEAR POWER must play a role in getting the world to net zero,” Bill Gates told the US Nuclear Energy Institute’s Nuclear Energy Assembly on 9 June. It was his most convincing statement yet on the future of nuclear energy, for several reasons.

As well as being the co-founder of Microsoft, and of the Bill & Melinda Gates Foundation, he is also of course the co-founder of nuclear technology developer TerraPower. The firm is gaining a head of steam with its Natrium design, which has a lot of promise. True to his roots in software innovation, Gates' firm has taken proven ideas and remade them for the mass market.

As a power plant design, Natrium has four important characteristics. First, rather than driving a steam cycle, Natrium gives itself lots of flexibility by putting its heat into a large molten-salt heat storage system. Secondly, the steam cycle runs from that, producing between 345MWe and 500MWe for a few hours. Thirdly, its designers say they have minimised the size of the nuclear island, cutting the number of nuclear-qualified components, instead using ones made to more accessible and affordable industrial standards. Lastly, the name stands out: Natrium, is easily pronounceable and moves away from the engrained idea that anything nuclear poses a spooky biological danger, even if they couldn’t resist a nerdy nod to sodium through the ‘Na’.

Gates’ appearance was timely. Just a week earlier it had been announced that the first Natrium pilot plant would be built in Wyoming, repowering a retired coal plant. Details were thin — no new money was announced, there were no firm dates and no specific site until the end of the year — but nobody was complaining about a lack of progress.

“We will take advantage of the existing grid infrastructure and the skilled unionised workforce there to build and operate the Natrium plant,” said Gates. “Never has there been a greater need to collaborate across the industry”.

In TerraPower’s case ‘we’ is a team including Bechtel, PacificCorp, Energy Northwest, Duke Energy and GE-Hitachi, whose Prism design is said to have contributed a lot to Natrium.

The nuclear field is littered with awesome projects that sadly never happened, but it does seem like things are really happening now. TerraPower is boosted towards its goal by $80 million of funding from the DOE’s Advanced Reactor Demonstration Program.

Meanwhile TerraPower, GE-Hitachi and Bechtel are also in the running to design and build another molten salt design: the US DOE’s forthcoming Versatile Test Reactor.

Gates summarised it like this: “Many innovative companies are working on bringing new nuclear technologies to market, and policymakers are recognising the need for these technologies, to solve climate change and maintain American leadership in nuclear technology.”

In terms of building, China is the world champion. Its infrastructure development — roads, rails, buildings and airports, as well as renewables and nuclear power plants — has been breathtaking. Even though the Fukushima accident took the wind out of its sails, China still brought online more than 36GWe of new nuclear capacity in the last decade. Most of these new units were built in around five years — the ones that took longer included the first EPRs and AP1000s. America’s construction experience in the last decade has been somewhat different.

China’s nuclear programme began by building some of everything available — pairs of PWRs, Candus and VVERs — and it innovates in a similar way. There is multi-year commitment to develop new generations of large light water reactors, while small versions are planned for floating platforms. More exotic types like fast reactors and small high temperature reactors are in progress. China has put itself in a position to learn everything and to double down on whichever technology shows the most promise.

Russia kept its faith in nuclear and is reaping the rewards with a new generation of fairly standardised large reactors replacing older units. It has also been the first country to deploy SMRs, aboard the Akademik Lomonosov.

In the same week as the Wyoming announcement, Rosatom poured first concrete for the BREST-OD-300 lead- cooled fast reactor. It will be part of a single demonstration of reactor technology, fuel manufacture and recycling on the same site and Rosatom said it should all be running by 2026. You might think that these SMR projects are small and with limited export potential, but Rosatom is currently the most successful nuclear exporter, with 35 reactor projects in various countries. It will not be easy to overtake.

Besides those very big players, the tier below includes South Korea, which has its own line of standardised large reactors and could have political support again soon. Canada has a rejuvenated industry and plans to be an SMR leader. And soon, my friends, I believe President Emmanuel Macron will guide France back to full scale nuclear development. Even the UK wants to take space on the global stage as an SMR exporter, although its government hopes this will happen on its own without any support.

Competition in the civil nuclear sector is gradually gearing up and former President Donald Trump was absolutely right to put a fire under the DOE and America’s potential. Despite all the fighting and polarisation, skilled advocates secured enough bipartisan support for nuclear for President Joe Biden to keep it going.

“Let me say it loud and clear: carbon-free nuclear power is an absolutely critical part of our decarbonisation equation,” is how Energy Secretary Jennifer Granholm put it recently. This solid policy support, backed by some investment, represents one leg for America’s new nuclear giant to stand on. Industry must create the other.

Excellent as they are, America’s array of profit-driven private companies will rarely be a match for the long-term planning and public investment of its most capable rivals.

At the same time, I can’t help thinking of the effect Elon Musk has had on the development of electric vehicles far beyond his own company. He defies gravity with more than just his space rockets. Insane levels of wealth surely help, but figures like Musk, Jeff Bezos and indeed Bill Gates, also bring inspiration, convening power and belief in what once seemed impossible.

We all felt excitement when we learned Bill Gates was serious about nuclear, and we have all been a little disappointed not to feel more of it. Bill Gates is a very busy man who is in demand to speak publicly about a great many things — technology, development, aid, vaccines, his favourite books, his predictions for the future, as well as, on occasion, nuclear power. But in the 15 years since he realised nuclear was needed and he began investing in TerraPower, Bill Gates has always been careful to only speak about nuclear on his own terms. He accepted none of the speaking invitations he must have received from nuclear associations and international organisations for all that time. I always took this to mean that despite his serious commitment and years of heavy investment, Gates still thought being seen on a ‘nuclear industry’ stage would contaminate his brand.

In 2021 Bill Gates changed his tactics. “Never before has there been a greater need to collaborate across the industry,” he told Nuclear Energy Institute members, “with a common vision for the role of nuclear in our electric grid. I look forward to working with all of you to make that future happen.”

It is my hunch and my hope that Bill Gates has finally placed himself well and truly on Team Nuclear.