After COP-21 – what is the opportunity for nuclear? 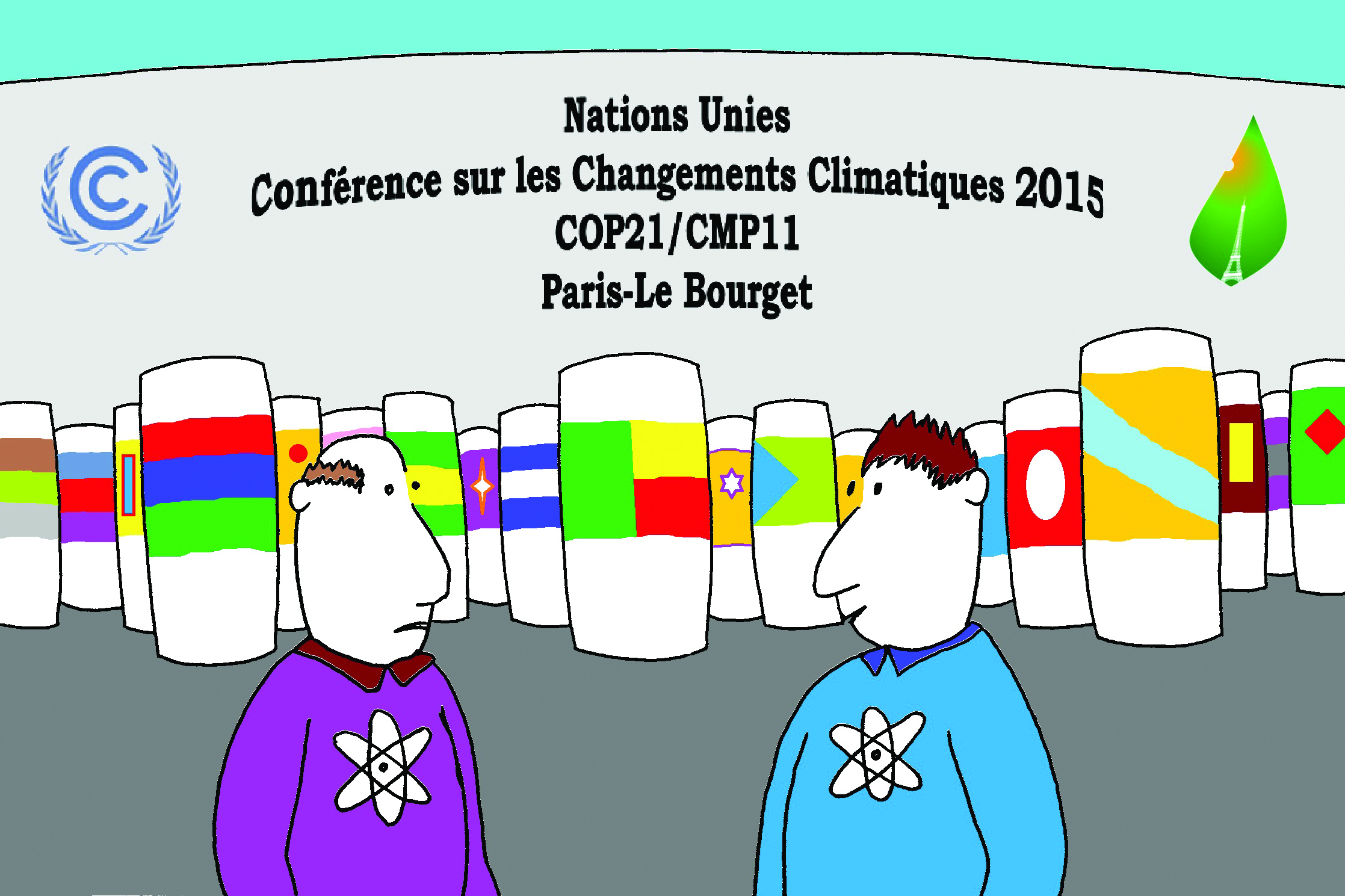 The international agreement on climate change achieved in December has been hailed as a historic milestone for the global energy sector, but what does it mean for nuclear power?

It was entirely predictable that the nuclear industry achieved precisely nothing at the recent Paris COP-21 talks on climate change and in the resulting international agreement. This is despite the usual rhetoric from industry leaders about nuclear power forming an important pillar in many countries' climate mitigation strategies. The industry is standing by to help react to the strong signal that investment in the energy sector should move rapidly towards low carbon technologies, but on current trends it is not going to happen. Nuclear was always going to get chewed up and marginalised in managing climate change (see for example January 2015, 'Is climate change the worst argument for nuclear?').

The outcome of Paris was remarkable in that 196 countries managed to agree about something, particularly after the fiasco at the previous talks in Copenhagen, but the agreement lacks any teeth. As one environmentalist commented, it only preserves the chance of saving the planet for later, without doing much for it now. Every country has to come up with a carbon reduction plan, known as their Intended Nationally Determined Contributions (INDCs), which will be subject to regular review. There is a huge gap between what INDCs achieve and what is needed, according to the leading scientists, and there is little other than moral suasion to induce countries to achieve more onerous targets once the review process gets underway. Financial help offered by the developed world to developing countries to achieve their goals, as hard cash or loan guarantees for clean energy investment, may prove more effective.

Despite all the back-slapping that accompanied the accord the only guarantee is continued high fossil fuel emissions. Oil and gas prices are falling, which is surely a golden opportunity to penalise carbon emissions by carbon taxes or emissions trading regimes. This was dismissed as being too complex to be seriously considered in Paris, which was perhaps understandable given the range of special interest groups involved. Yet continued low fossil fuel prices will spur construction of more fossil fuel infrastructure and the investment decisions made today will determine the overall path for the next 50 years.

The onus is therefore upon the major economic powers, notably the USA, China and the European Union, to define a path to carbon-free energy and drag the rest of the world along. Each country can choose its own technologies but very few have any great commitment to nuclear.
On the other hand, the industry continues to point out how much carbon has been averted by the use of nuclear power since 1970. When countries have curbed carbon emissions in the past, nuclear power has played a very significant role and (contrary to the view that nuclear programmes are too slow), in a reasonably short time.

The problem is that nobody has ever built a nuclear power station to curb carbon emissions. The industry's PR effort has got seduced by the environmental case, but this has been a major mistake. This is perhaps an understandable one given the prominence of the debate about climate change, but it has become a fatal distraction.

All of the reactors currently in operation were built mainly to produce a huge amount of power cheaply and reliably from a very limited raw material input, providing energy security. This has indeed been their greatest success. The environmental benefit has been incidental. It could be more important in the future (particularly if penalising carbon can alter the financial balance) but the prime arguments for nuclear remain the same.
It is impossible to sell a technology on the basis of what it doesn't do. There are many different ways of averting greenhouse gases and as things stand, in almost every country nuclear is a long way down the queue. With likely technical progress in renewable energy technologies (particularly in solar) and in energy storage, nuclear will fall further behind unless it can change.

Successive annual editions of the International Energy Agency World Energy Outlooks and other publications have been demonstrating an important role for new nuclear for years, but without national programmes, nuclear will never fill the space which is available for it. Where it is chosen, it will be a "last resort technology" after all else has failed, which inevitably puts programmes at risk of sudden cancellation when times change or something better comes along.

Analysis of the INDCs of the 196 governments that signed up to the Paris agreement show that nearly all of them exclude nuclear power. China, Russia, India, South Korea and the UK still want new-build but they will hardly offset countries where nuclear is in decline. The future is likely to repeat the experience of 2015 when 10 new reactors came into operation but 8 shut down.

Given the age of the reactors in operation and national plans to phase out nuclear in favour of renewables, reactor closures will continue. In Europe Germany, Belgium, Sweden and Switzerland are set to phase out nuclear and even France will substantially lower its nuclear share. In Canada, Pickering is likely to close around 2020. Possibly 20 reactors in the USA are at risk of closure by the mid-2020s for economic and other reasons. Even in Asia, the picture is not universally favourable. In Taiwan, reactors have fixed operating lives and nuclear could be phased out before 2030.

The Chinese nuclear programme remains limited in scope and is still smaller than its new coal and renewables build. It seems set to continue at 6-8 reactors per year to 2030 and has become constrained by issues that affect nuclear elsewhere - construction delays, economic concerns, public acceptance and slowing demand growth. In India it remains to be seen whether the government's commitment to nuclear will result in a higher rate of construction. The Russian programme, domestically and overseas, is constrained by the financial pressures from a lower oil price and economic sanctions following the Ukraine situation.

The industry is running to stand still. The additional 1000 or 2000 reactors needed by 2050 for nuclear to take up the place suggested in IEA energy scenarios are a long way away. It could be that the world will proceed to review the INDCs and countries realise that they cannot achieve their emissions targets without a big new push for nuclear but this seems unlikely. Something easier, simpler or better will turn up. Advanced nuclear reactors, including small modular reactors (SMRs) may be available to contribute at this point, but there may be too much hope in these. It is important to make the case for nuclear on the basis of what is available today.

Nuclear has to change its brand image. People in the industry have talked about this continuously since the Fukushima accident, but little has been done save for focusing on the environmental case. Even when governments and see the limitations of renewable power and the need for nuclear, they are afraid - in many cases rightly - that their electorates are fearful of it.

I have outlined an approach to dealing with this (February 2015, 'Nuclear Power - how can public opinion be won over?'). This is a huge undertaking but the need is a complete paradigm shift in how the world views nuclear technology (see September and October 2015). It is becoming increasingly clear that it is understanding radiation, and reforming the international regime that protects the public, which is crucial.

So long as any dose of radiation, however small, is regarded as harmful, the nuclear industry has little chance of fulfilling its potential. It may now accept that future accidents are probably inevitable, but cannot claim that the consequences are manageable if they result in mass evacuations. If the number of reactors around the world is going to be 1000 or 2000 rather than 400, there are likely to be accidents with some offsite radiation releases more frequently than every 25 years. The industry has to be able to demonstrate that these are manageable but at the moment it clearly cannot.

The challenge is to get the linear no threshold (LNT) theory of radiation exposure consigned to the dustbin (see Radiation - how can the industry deal with its biggest challenge). Until there is clearer guidance on what is and is not safe, the industry can go nowhere. The public certainly need to be better-informed about radiation. All work on SMRs and new rector designs will be wasted unless the public fears about nuclear can be removed. Then the economics will begin to look right again and the industry can move forward.

Despite the attraction of smaller scale power generation and localised distribution, urbanisation and industrialisation will continue to require large scale power generation. Of the renewables, only hydro power can guarantee this, but it is limited by geography. Turning away from fossil fuels requires more nuclear power and this should become increasingly evident as experiments with renewables are shown to have severe practical limitations. Nuclear must therefore be ready to sell all of its advantages. The environmental advantages (not forgetting cleaner air in all the Chinese and Indian cities) are important, and reliable, large-scale generation and the resulting energy security is still the real key. But firstly all the fear must be removed.