A question of reinvention 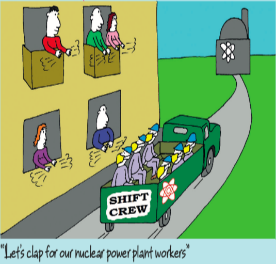 Nuclear energy needs to reinvent itself so that its benefits, risks and deeds are understood in terms of the values guiding us through this pandemic, says Jeremy Gordon.

Frank M. Snowden, professor emeritus of history and the history of medicine at Yale, told the New Yorker: “Epidemics are a category of disease that seem to hold up the mirror to human beings as to who we really are.”

Four years ago in my home country I was told that, “The British people have had enough of experts,” by Conservative politician Michael Gove. Now I am watching him, as well as the prime minster and every other cabinet member, appeal for public trust by saying at every opportunity that they are following “the best scientific advice.” Even so, their actions have been measured against another authority, the World Health Organisation, and evolving Imperial College briefings to the Scientific Advisory Group for Emergencies (SAGE) resulted in a policy reversal.

“If you think SAGE is a cosy consensus of agreeing, you’re very wrong indeed,” said Patrick Vallance, the UK government’s chief scientific advisor. The global effort to figure out the workings of novel coronavirus and COVID-19, its effects on the human body, and what countermeasures we should take has been playing out in the information age, with everyone from nurses on the front line, infectious disease experts and even tech entrepreneur bloggers contributing much to public understanding. Not everything out there has been useful, but I personally found the informed experts of social media by far the best sources of information.

Having spent time in Hong Kong in January, I have been watching closely from the start. My simple brain was satisfied once it had taken on board four key facts: first, nobody has any immunity to this virus; second, asymptomatic cases and long incubation times make it extremely difficult to track and stop; third, it doubles every two or three days unless you take radical steps to mitigate its spread; fourth, demand for ventilators is such that healthcare systems crash and carnage ensues before even 0.1% of the population is infected.

Covid-19 is rare among our global challenges in working on such simple and urgent principles. But many other issues also have strong rationales for serious collective action sooner rather than later. They also have their own authoritative UN bodies and legions of scientists communicating clear axioms for government action.

Writing for nuclear energy professionals who provide 10% of the world’s electricity, with a tiny environmental footprint, I don’t need to state the obvious. My point is that when values are shared and risks are clear, human beings can achieve things that once seemed impossible.

The last few weeks have shown us a lot about our pre-Covid-19 way of life.

As human beings we have been reminded that personal contact is essential to us, that community wellbeing is paramount and that our nature is to act with solidarity during a crisis.

Our society realised that it can create evidence-based policy and it can make public investments in the common good. The best of our leaders will change their minds as new facts emerge, and it is the least privileged among us who are most affected by issues and policies.

As individuals we saw the air in our cities clear up noticeably in days, and when we ventured out we found streets so free of traffic that we could safely share the whole road. The soundtracks of our suburbs reverted to birdsong. Wildlife began to bounce back as soon as human pressure was lifted. In energy systems, carbon dioxide emissions dropped by about 15% and renewables and nuclear both played proportionally larger roles. Eventually we will know how many people’s lives have been saved simply by the cut in air pollution. In many ways lockdowns have represented interventions in our fossil-fuel-addiction. We need to hold tight to the insights we’ve gained.

Echoing Professor Snowden, the entrepreneur James Altucher said, “The virus is enhancing what is already inside each person. Jerks are turning into bigger jerks. Compassionate people are becoming more compassionate. You get to decide in this very difficult time who you really are.” And we will see who people really are when we try to reboot the global economy. Bad actors will jump at any chance to do what they always wanted, and there will be thousands of voices clamouring to set the narrative justification of why their way is the only way things can be. A potential descent into blaming, nationalism and war will be as tangible as an ascent to the clean and equitable ways of life our values aspire to. Whichever way things work out, the 2020s are guaranteed to be transformational.

The nuclear industry is orders of magnitude too small to have any influence on the new global direction and is caught flat footed and weak. Its current range of products and projects will be lucky to scoop up any of the coming stimulus cash, most of which will go to developments with short lead times, more visibility and more integration with the wider economy.

I hope I am shown to be pessimistic, because the economic benefits of nuclear are huge, and investment in it provides a clean and secure long-term platform for the economy as a whole, which we surely need.

Characteristically, nuclear has kept on trucking in this crisis. Thanks to innate fuel security, managerial preparation and innovation, and stoic efforts by its people, it has served society very well. I want to extend my gratitude to everyone that made this possible: the utilities that are supporting people who cannot pay their bills and the plant operators that donated badly needed protective equipment to medical workers. By the time you read this there will have been even more good deeds.

However, to emerge from this crisis saying “aren’t we strong and reliable” will not be enough and represents a poor strategy. It would only take one slip-up to spoil everything. The world is set to change very quickly now but the nuclear industry is still far behind the curve of popular culture. It will find itself stranded unless it catches up with society. More than a renaissance, nuclear energy now needs a reinvention to position itself so that its benefits, risks, words and deeds are understood in terms of the values guiding us through this pandemic – society, science, and solidarity – which will be galvanising in years to come. Nuclear needs to be not just part of the solution to issues of energy supply, but part of the solution to everything.

It’s not impossible. The legacy of Albert Einstein has made nuclear science a byword for genius. In large reactor designs we have fundamental infrastructure for national resilience that are worthy of public investment and support. And in advanced reactor designs we will have flexible energy platforms that can disrupt fossil fuels and do away with their pollution permanently. Conditions and support for nuclear workers and their communities are usually good, but we can make them core to the mission of our sector and extend them through partnerships with non-traditional allies.

Leading the International Atomic Energy Agency, Rafael Mariano Grossi provides a confident voice in the international system making nuclear’s role and potential impossible to ignore. In the ecosystem of independent advocates we have empathetic grassroots activism demanding objectivity and ambition in energy choices that affect all of society. Nuclear energy already contributes directly or indirectly to virtually all of the Sustainable Development Goals.

As the 2020s began we expected them to be transformational for clean energy. Now we know they will change much more than that. The question for us is: who do we really want to be when this is over?