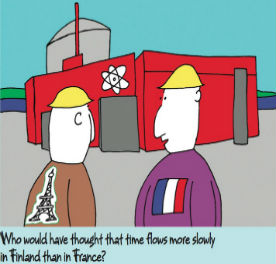 As operation of the Finnish EPR approaches, Jeremy Gordon reflects on the 15-year construction process and explains why Olkiluoto 3 remains a significant project despite its hefty delay.

You have to write more. This is a big deal,” I was told by Stephen Tarlton, then the editor of Nuclear Engineering International, on my first day in 2004. He was looking at a draft of the first news article I had been assigned to write, for

the January 2004 issue, covering the signing of a contract a month before to build something called an EPR at a complicated sounding place called Olkiluoto. And a big deal it was – it was going to be the first of many in a standardised fleet around the world. Everyone was excited and €3 billion for a power plant was a lot of money at the time.

A year and a half later I found myself on a business trip to report on a groundbreaking ceremony at the site. Another first for me, travelling overseas and trying to keep up in conversation with real industry experts as they told me about their business.

And tell me about it they certainly did. As I was being looked after very well by press officers from Areva and Siemens, and being treated to a nice dinner and some beers in the hotel bar, it just so happened that a large group of middle-aged men entered the hotel lobby. Heavily refreshed after a boat tour of Helsinki harbour, this group of French nuclear engineers joined us and decided to explain to me all the troubles they had so far.

We were only hours before the groundbreaking ceremony, due the next morning, yet already there were complaints that they had “never seen anything like it” and it was “unbelievable” and “impossible” to get along with the Finnish regulator, Stuk. Something was supposedly wrong with the concrete for the basemat and it was already causing a big hold up. There was waving of hands, rolling of eyes and shrugging of shoulders, while the press officer’s eyes grew wider and wider and I became the first journalist to find out that things were not exactly going according to plan. The next day in the office buildings at Okiluoto we gathered to hear Areva CEO Anne Lauvergeon tell us all everything was going well and fixing to go even better. I still have the recording on MiniDisc, and the only thing missing is me putting her on the spot by asking about the concrete issue, because I didn’t have the nerve.

That low profile paid off a few minutes later, after dignitaries had placed a time capsule in the power plant foundations, including various documents along with their business cards. Once they were done I peered over the edge, took a photo, and pretended to flick my own NEI magazine card towards the still-open time capsule. If I had made trouble at the press conference I doubt the very senior EDF guy would have decided to take it from me and pop it in alongside the others to be entombed under the seawater pump building, where I suppose it will remain for a very long time indeed.

I got the dirty details from the hotel bar incident into later stories, when the risk of career damage to the unfortunate press officer had passed, but in my write-up of the trip I summarised the status as merely, “Senior managers at Framatome ANP and Siemens told NEI that processes of verification have set some parts of the project back by two or three months.”

Almost 15 years later I can forgive myself for the weakness and a missed opportunity to break a big story, because in time we all got very bored of reading about the delays, the recriminations, the arbitration and the fallout of Olkiluoto 3. The initial price tag of the reactor may have been only €3 billion, but its true cost has been incalculable. Along with the unwise acquisition of UraMin in 2007, Olkiluoto costs cratered Areva’s balance sheet and led to the recent reorganisation back into Framatome and Orano, with some parts going to EDF. And far worse, the whole affair cut France’s confidence in its nuclear sector so badly that much of its fleet has ended up on the chopping block.

Nevertheless, the project is a landmark in the nuclear industry, and for lots of reasons. Don’t forget that at the start of construction it was set to be the biggest power reactor ever to operate. The EPR design at Olkiluoto with a Siemens steam turbine is rated to produce 4300MWt, converting to 1760MWe gross and 1600MWe net to the grid. The machine itself consumes 160MWe just in operation – equivalent to ten high speed Eurostar trains giving it full beans. Olkiluoto 3 is a big deal and will only be bested by other EPRs which nudge out an extra 30-60MWe net.

The current crop of large reactor designs were developed according to utility demands of the 1990s, which were for the best-value reactors they thought they could finance through predictable income from regulated markets, or in some cases support from the state. The European Utility Requirements document to this day is framed around units in the range 600MWe to 1800MWe. I am very sympathetic to the vendors’ situation in the last decade or so, where the large 1990s reactor designs they were told to create were expected to be rolled out into completely different market situations after a 15-year lull in construction. And emerging from that lull carefully cradling just one, or maybe two, marketable products each, what else were they supposed to do? The utilities’ song had changed from “bigger is better” to “the bigger they come the harder they fall” and I wish this industry had been able to dance to the remix somewhat earlier. Now the focus is less on creating the most efficient reactor, to pump out as much electricity as cheaply as possible, and more on creating one that can be built at all, considering the state of most markets.

As a result EPR probably represents the peak of economies of scale for nuclear energy, and like its aircraft cousin the Airbus A380, it found that orders have been disappointing.

In the middle of this year there should be four in operation (at the Taishan, Olkiluoto and Flamanville sites) with two more under construction at Hinkley Point. It’s a fool’s game to predict anything about the UK these days, although two more at Sizewell C appear very much on the cards. Is India ever going to order its six at Jaitapur?

Anyway, EDF now has 200 engineers busily working on the EPR 2, which it intends to optimise and make more constructible and financeable. They are certainly not trying to make it even bigger. It’s refreshing to see industry become more product and market-focused in the last year or two with an attempt to create right-size products that will fit into markets as they actually exist, rather than as engineers would prefer they did. Renewables are the big deal now, and conducting business on other assumptions will work out badly. Unless and until storage reaches levels commensurate with nuclear plant outputs, the issue of dancing to renewables’ tune is only set to grow.

Olkiluoto 3 stands as an incredibly significant project which marked the beginning of the Renaissance, exemplified its flaws, and signalled the ignominious end of its first phase. As I wrote last month, we can hope now that Renaissance 2.0 may soon begin, driven by serious governments that know nuclear energy is needed and are prepared to create the conditions for it to happen. In that scenario, we may see large reactors replace and expand the fleets in Europe, North America, Asia and beyond, while SMRs spread to new countries and innovative designs with novel applications fill new niches in decarbonisation. The most realistic pessimistic alternative is unfortunately dominated by a slow die-off, except for blooming domestic strongholds in China, Russia and India.

So here’s to you, Olkiluoto 3. A global industry’s dreams were riding on you and felt your pain through those long years of construction. It is wonderful to see you win your operating licence and a relief that Stuk never found out about my business card.

In the hands of master operator TVO I think youcan expect to be one of the most productive reactors ever, with a capacity factor to boast about and maintained in mint condition over 60 or perhaps 80 years. Whichever path the nuclear industry takes to the dawn of the 22nd Century, there’s a good chance you will still be operating to see it.