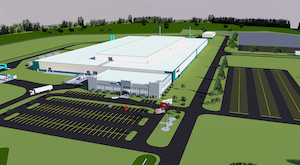 The TRISO-X Fuel Fabrication Facility (TF3) is being commissioned through funding, in part, from the US Department of Energy’s (DOE’s) Advanced Reactor Demonstration Programme (ARDP).

“The Department is pleased with the progress that TRISO-X has made to date in developing a commercial-scale capability to fabricate this robust fuel form in support of our Advanced Reactor Demonstration program, and we believe that the Oak Ridge area is an excellent choice for this facility based on the availability of a technology-oriented labour force and strong community support for the Department’s nuclear mission“ said Alice Caponiti, Deputy Assistant Secretary for Reactor Fleet and Advanced Reactor Deployment.

The facility’s design will enable manufacturing of fuel for any number of advanced or small nuclear reactors based on TRistructural ISOtropic (TRISO) fuel. “TRISO is a technology that’s been developed and improved over 60 years. Our facility will bring this game-changing fuel to market, beginning with a proprietary spherical fuel pebble for X-energy’s Xe-100 reactor and its utility partner Grant County Public Utility District, in Washington state,” said TRISO-X President Dr Pete Pappano.

TF3 is scheduled for commissioning and start-up as early as 2025, and is projected to generate more than 400 jobs to the Oak Ridge area and attract an investment of nearly $300 million, building off investments to date of over $75 million.

The facility will initially produce 8 metric tons a year (MTU/year) of fuel that can support about 12 Xe-100 reactors. The TRISO-X team aims to expand the facility’s capacity to 16 MTU/year by the early 2030s. Throughout construction of the modular facility, the subsidiary will partner with local community colleges to develop a training programme and recruit from the local labour force, helping to create sustainable economic opportunities for the region.

“The Department of Defense and NASA are currently two of our government customers. The TF3 will be used to continue to support government funded projects, such as mobile reactors for the military or space nuclear projects,” Pappano noted.

He added, “Our team has actually been working in Oak Ridge since 2016. We now have about 40 employees and five locations, two of which are operating facilities: our TRISO-X Pilot Facility located inside Oak Ridge National Laboratory, and the TRISO-X Research and Development Centre located in the Centrus Technology Manufacturing Centre.

The TRISO-X Pilot Facility operates inside Oak Ridge National Laboratory via a public-private partnership and produces kilogram quantities of HALEU fuel. The TRISO-X Research & Development Centre operates inside the Centrus Technology Manufacturing Centre and will be used to train operators for the commercial TF3.

TF3 will be a first-of-a-kind US Nuclear Regulatory Commission (NRC) Category II licensed TRISO-based fuel fabrication facility. It will utilise uranium enriched to less than 20% to manufacture nuclear fuel products for a variety of advanced and small modular reactors, plus specialty fuels for space nuclear projects.

Site preparation and construction of the facility will get underway in 2022, with NRC commissioning and start-up scheduled for as early as 2025. ARDP aims to spur the development of advanced reactor technology in the United States and for the global export market.

In 2020, the DOE announced X-energy as one of two awardees for ARDP. In March 2021, X-energy signed the ARDP Cooperative Agreement, officially marking the start of the company's participation in the advanced reactor programme. This project enables X-energy to build the world’s first commercial scale advanced nuclear reactor and TRISO-X to partially fund TF3. The following August, X-energy established TRISO-X as a subsidiary to commercialise its advanced nuclear fuel. In November, Congress appropriated approximately $1.1 billion to X-energy’s ARDP Project with Historic Legislation Recognising Clean Energy Supply as vital to US Infrastructure and Economic Health.