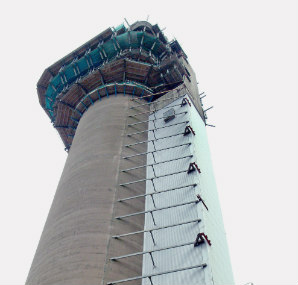 Work is progressing in earnest on the decommissioning of the last remaining 110-metre-tall chimney at the Windscale Pile Reactors at the Sellafield site.

The chimney has been opened up for the very first time in over 17 years, which is a tangible sign that real decommissioning progress is being made, Sellafield Ltd said.
Work is now underway for the major demolition of the filter gallery structure. Some 66 tonnes of brickwork have been removed from the filter gallery external walls and all of this has been transferred from the top of the chimney in a small goods hoist which runs up and down the outside of the chimney.

"The plan is to remove the filter gallery by the end of next year [2014] and then the chimney diffuser by 2018 to meet the requirements of our customer the Nuclear Decommissioning Authority. A tower crane will be built alongside the chimney and the chimney barrel itself will then be dismantled and lowered down in sections," said Steve Slater, Head of Decommissioning.

The remaining pile chimney worked as a ventilation shaft for Windscale Pile One which caught fire in 1957. Following the fire, the chimneys were sealed at the top, the contaminated filters removed and air inlet ducts isolated. Radiation levels had to reduce significantly before decommissioning work could start. The first chimney was reduced to the level of the adjacent reactor building in 2001, however the second chimney posed more of a challenge due to radioactive contamination from the fire.

Photo: Work is now underway for the major demolition of the filter gallery structure and this is due to be completed by the end of 2014. (Source: Sellafield Ltd)