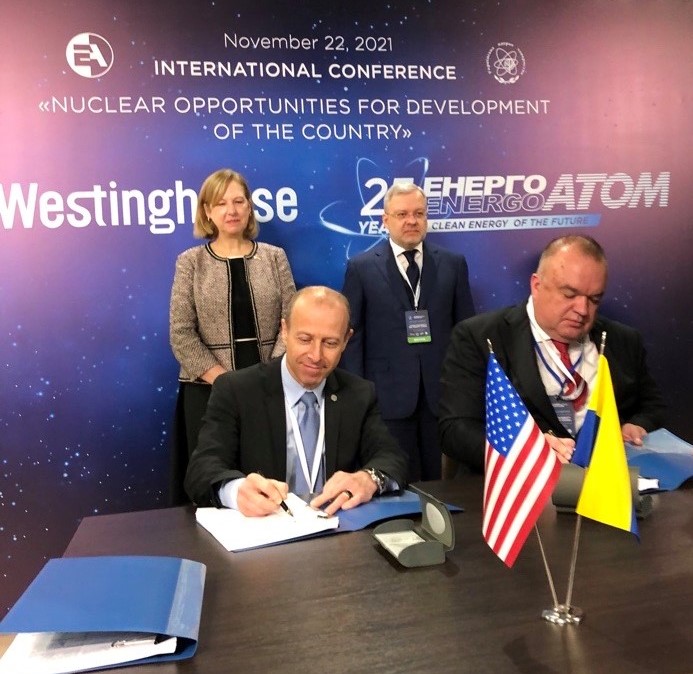 Westinghouse Electric Company and Ukrainian nuclear utility Energoatom on 22 November signed a contract in Kiev outlining details of their agreement to bring Westinghouse AP1000 reactors to the Khmelnitskyi NPP.

This agreement initiates engineering and procurement of long-lead items for the first Westinghouse AP1000 unit at the site. The signing ceremony took place during an international conference on "Atomic Opportunities for Country Development" marking Energoatom’s 25th anniversary. It was attended by Ukraine Energy Minister Herman Halushchenko, and US acting Charge d’affaires to Ukraine, Kristina Kvien. The agreement “will help bring Westinghouse AP1000 reactors to multiple sites in Ukraine, starting with the construction of units at Khmelnitsky”, Kvien noted. “Ukraine’s energy security and energy goals are critical priorities for both countries.”

Petro Kotin, Acting Energoatom President said: "The Agreement signed with partners from Westinghouse opens a new stage in the development of Ukraine's nuclear energy sector. Construction of new power units is essential for energy independence of our country. Moreover, we are becoming the driving force that will pave the way for Europe to carbon neutrality. Energoatom, in cooperation with our American partners, is ready to make the green transition to clean and affordable energy."

In August it was announced that Energoatom had selected Westinghouse AP1000 technology for its long-term goals to develop new NPPs in Ukraine. The exclusive agreement provides that Westinghouse and Energoatom will pursue AP1000 reactor projects to help the country reach decarbonisation and its energy security goals. Westinghouse says the AP1000 plant is a proven Gen III+ reactor. “It has unique fully passive safety systems, modularized standard design, high operability performance and load following capability. The AP1000 projects will provide Energoatom and Ukraine with substantial economic and localisation benefits through the construction and operating life of each reactor,” according to the statement.

After signing the agreements, Kotin told the conference: “Our goal is 24GW of nuclear capacity by 2040. We are going to do it with the help of our specialists and with the help of our international partners." This compares with 13GWe in operation at present. He noted that a memorandum of understanding had been signed for five new units including two at Khmelnitsky as well as one unit at each of three other nuclear power plant sites (Rovno, South Ukraine and Zaporozhye) as well as two others at a new site – Orbita in Chigrin in central Ukraine, which had previously been considered for a  new NPP during Soviet times. He said Energoatom was working towards site approval. He added that Ukraine is aiming for four new units at two new sites between 2032-2040.

Kotin said the AP1000 had been chosen because it took only five years to build and would cost $5 billion. He said that, after the first unit was built, 60% of the equipment for new plants would be supplied by Ukrainian companies and even for the first unit Ukraine would supply the non-nuclear parts with Westinghouse supplying the reactor. He indicated that US Eximbank would help with the financing.

For his part, Westinghouse CEO Patrick Fragman said: “We are delighted that our collaboration has received a new impetus. Ukraine produces more than half of its electricity from nuclear energy. And Westinghouse supplies about half of the fuel for Ukrainian nuclear power plants. We are waiting for the AP1000 reactors to appear here. Ukraine has a large number of challenges in the energy sector and should gradually decommission Russian-type reactors and build new plants. We can help develop carbon-free technologies and maintain high standards of nuclear safety .”

Ukraine’s 15 reactors - at Zaporozhye, Rovno, South Ukraine and Khmelnitsky - include 13 VVER-1000s and two VVER-440s with a combined installed capacity of 13,835MWe. Khmelnitsky has two operating units (units 1&2, connected to the grid in 1987, and 2004). Plans for the construction of two more units (3&4) were first announced in 2010 during negotiations between Russian and Ukraine and were originally intended to be Russian VVER-1000 units.  Construction of the units began in 1985-1986 but stalled in 1990 with unit 3 at around 75% completion and unit 4 about 28% complete.

In August 2020, Energoatom had said it would resume work on the units and promised to approve a plan for completing them by the end of 2020 for operation in 2026. Plans were to produce up to 70% of the equipment for the station in Ukraine while negotiations were also underway with Korean, Chinese and Eastern European companies, in particular Czech company Skoda JS.

Neither Westinghouse nor Energoatom have made it clear whether the new agreement is for the completion of those units or the construction of two new ones. However, Kotin has suggested that Westinghouse may complete Khmelnitsky 4 and build a new plant, Khmelnitsky 5. The deals between Ukraine and the USA signed in September specified that five new reactors could be built "using AP1000 technology "and it was indicated that Khmelnitsky 4, would be first making use of the structures of the partly built VVER-1000 reactor.

A technical delegation from Westinghouse recently visited Khmelnitsky and Energoatom managers have taken a tour of stored AP1000 components from the cancelled VC Summer construction project in South Carolina. Westinghouse has indicated that these reactors will now be used in Ukraine.

In response to questions from NEI, David Durham, president, plant solutions at Westinghouse was unable to give a timeline for construction and commissioning of the new reactors and said such questions “are best to be directed to Energoatom, who will have lead responsibility for these areas”. He said components not available in Ukraine will be transported by ship and that the delivery schedule “is to be jointly decided”.

AP1000 technology is not familiar to Ukrainian nuclear scientists and engineers whose back ground is VVER technology. Asked whether Westinghouse would be offering a retraining programme, Durham noted: “Westinghouse conducts operator training for all AP1000 projects. The AP1000 is much easier to operate and maintain than other pressurised water reactors (like VVERs). We are confident Energoatom’s operators will be extremely pleased when they begin learning of the substantial advantages the AP1000 provides to its operators.”

He confirmed that Westinghouse will supply fuel for the AP1000 plants but said used fuel management would be the responsibility of the operator. As to financing of the plants, he said: Westinghouse has had a long, successful working relationship with Energoatom. Financial arrangements are business sensitive.” He affirmed that the AP1000 equipment from the former VC Summer project “has been maintained appropriately per industry standards”.

As yet, no AP1000 reactors are in operation except four in China, which were completed with significant Chinese participation. The two units at the Vogtle plant in the USA are facing repeated delays and technical hitches. Asked whether he was confident that the timeline and budget schedule (once decided) would be met in Ukraine, he commented: “Ukraine has a robust nuclear industry, including constructors and suppliers. This provides great confidence in Energoatom’s and Westinghouse’s capabilities to successfully deliver the planned AP1000 units, applying lessons learned from Westinghouse’s six other AP1000 units and Energoatom’s rich history building and operating pressurised water reactors in Ukraine.”

Photo: Westinghouse and Energoatom signed a contract in Kiev outlining details of their agreement to bring Westinghouse AP1000 reactors to the Khmelnitsky.