Westinghouse ATF test assemblies to be installed at Vogtle 2 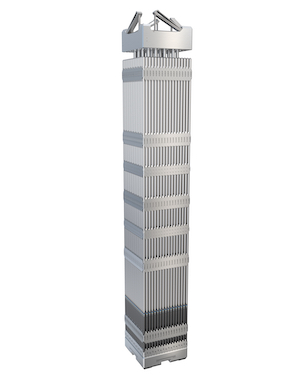 US Southern Nuclear recently agreed to install four higher-enriched fuel lead test assemblies into one of its commercial reactors the US Department of Energy (DOE) announced.

The planned installation will be the first of its kind to test a new fuel concept that is being developed by Westinghouse through the DOE’s Accident Tolerant Fuel programme. The lead test assemblies will include a higher enrichment of uranium-235 than is currently used in US commercial reactors. The lead test assemblies will be loaded into unit 2 at Georgia Power’s Plant Vogtle by 2023.

The lead test assemblies will include Westinghouse’s ADOPT™(Westinghouse Advanced Doped Pellet Technology) uranium dioxide pellets and advanced chromium-coated zirconium alloy cladding design which are expected to boost the performance and enhance the safety of commercial reactors. It will also leverage four lead test rods enriched up to 6% with uranium-235 – 1% higher than is currently licensed by the Nuclear Regulatory Commission (NRC). The higher enrichment will allow for higher fuel burnup and longer operational cycles between refuelling.

“Southern Nuclear and Westinghouse have been tremendous partners to our Accident Tolerant Fuel program,” said Frank Goldner, a nuclear engineer within DOE’s Office of Nuclear Energy. “Testing this higher-enriched fuel is a major step in deploying new fuel technologies that can help improve the economics of our existing fleet of reactors.”

Oak Ridge National Laboratory is currently performing post-irradiation experiments on the company’s fuel to support licensing efforts with NRC. The regulator is also reviewing the company’s topical report on its ADOPT fuel pellet which was accepted back in 2021 as part of the licence review process.

Westinghouse, GE, and Framatome are currently working with DOE to develop new cladding and fuel designs that significantly increase the performance and enhance the safety response to severe accidents.

All three companies are currently testing their new fuel concepts in commercial reactors across the USA or are working through DOE national laboratories on examining their fuel performance.

Southern Nuclear was the first utility in the world to install GE-Hitachi’s accident tolerant fuel cladding in 2018 at Plant Hatch and currently has four lead test fuel assemblies developed by Framatome installed at Vogtle 2. All three vendors are on track to have their accident tolerant fuels ready for batch loading by the mid-2020s and commercially available for widespread adoption by 2030.