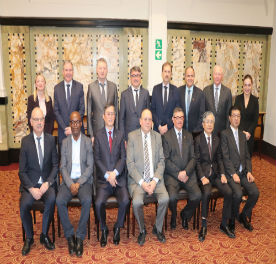 The membership of the World Association of Nuclear Operators (WANO) voted on 21 February to establish a new Branch Office and Support Centre in Shanghai, China. This will make it easier for WANO to provide its full range of services to operators in world’s fastest growing region for commercial nuclear power. The strategic rationale for the move is to cater for the dramatic growth in the development of nuclear power plants in both China and across Asia, where around two-thirds of the world’s new reactors are under construction, WANO said. It added, "With a growing demand from new units for its services, WANO will be well positioned to ensure that these units make a safe and reliable transition from construction to operation."

WANO CEO Peter Prozesky noted that over the past 30 years, China has become a key player in the commercial nuclear sector. He welcomed the increased participation and expertise of Chinese members “in supporting our mission to maximise nuclear safety and reliability”. He said the new office “will be international, independent, technology agnostic and capable of carrying out all WANO functions” He added: “In particular, internationality and independence are vital components of WANO - as this is where WANO draws its strength on safety by ensuring a diversity of views.”

WANO has defined a high-level, three-phase deployment model for the office in Shanghai. The first phase involves setting up a Branch Office, staffed with around 40 people, which will be under the control and oversight of the London Office. This will later transition to a Support Centre, still managed by the London Office, but with the depth of skill and capacity to start supporting other regional centres. In the third and final phase, WANO will convene another meeting for members to vote on establishing the office as a fully-fledged WANO regional centre.

WANO is a not-for-profit international organisation that helps its members maximise the safety and reliability of nuclear power plants worldwide. It was established in 1989 by the world's nuclear power operators to exchange safety knowledge and operating experience amongst organisations operating commercial nuclear power reactors. WANO’s members operate some 460 nuclear units in over 30 countries and areas worldwide.