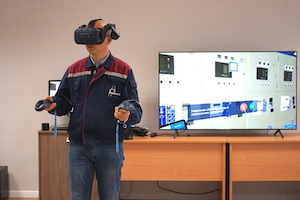 The first tests of a virtual reality (VR) simulator for training electrical personnel have been carried out in the Educational and Training Subdivision of the Leningrad NPP, the plant said on 24 August.

The unique complex, which uses a special helmet and controllers that act as hands, makes it possible to see the serviced equipment in virtual space, and also to experience out in absolutely safety the entire range of operations that a specialist encounters in real work. Another advantage of the VR simulator is the visualisation of all the consequences of possible personnel errors.

“The Leningrad NPP became the first pilot site among Russian nuclear power plants, where it was decided to implement a virtual training simulator for personnel (VR simulator),” said Sergei Rechkin, of Leningrad-II NPP. “The first model for its creation was the electrical equipment KRU-10 kV, used at units 5 and 6 of the Leningrad NPP (VVER-1200 reactors). In the future, it is planned to develop 26 more programs on the VR simulator in various areas of activity to train workers in other specialties. These technologies are especially in demand where personnel errors during training on operating equipment can lead to abnormal situations or have undesirable consequences."

Until now, all electrical personnel of the plant underwent training or advanced training as part of the production process, which was extremely inconvenient, since they had to wait for the planned shutdown of the unit for repairs or perform work in the controlled access area, which are limited in time. It is planned that, on average, up to 1,000 specialists will be trained on this simulator each year.

The unique digital equipment was developed by CROC Immersive Technologies based on the import-substituted Astra Linux operating system as part of the nuclear industry digitalisation programme.