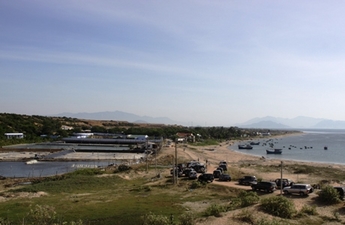 The government of Vietnam has entered a partnership agreement with Japan for its second nuclear power plant in Ninh Thuan.

The deal is the first time Japan has received an order to build a nuclear power plant in a non-nuclear country.

In a joint Vietnam-Japanese statement, Japanese prime minister Naoto Kan said, "Prime Minister Naoto Kan welcomed the decision, and assured that Japan would meet the conditions that Vietnam had set out, such as assistance in conducting feasibility studies for the project, low-interest and preferential loans for the project, the use of the most advanced technology with the highest safety standards, technology transfer and training of human resources, and cooperation in the waste treatment and stable supply of materials for the whole life of the project."

Ninh Tuan 2 is expected to match the 'capacity, technology and general ground plan, zoning systems and infrastructure' of the 4000 MWe Ninh Thuan 1, to be built by Atomstroyexport of Russia, according to a report on the Vietnam Atomic Energy Institute's website. Since Russian civil nuclear technology revolves around pressurised water reactors, it would seem likely that the Japanese consortium would be more likely to build a PWR than BWR.

Tokyo Electric Power Co and the Mitsubishi Research Institute are using the Vietnam project as a test case in a feasibility study of a new bilateral carbon credit system for nuclear power plants. Currently, nuclear power development projects are not recognised for inclusion in the international Kyoto Protocol Clean Development Mechanism.

According to the document signed, Russia's E4 Group will perform all the NPP pre-construction works, which include the elaboration of feasibility study (FS) of the main, and basic project. Also, the company will perform works connected with design phase of the future NPP in Vietnam, according to Mikhail Abyzov, Chairman of the Board of Directors, JSC E4 Group.

Xie Huong, director of the department of energy, ministry of industry and commerce, said his ministry, Vietnam Electricity and Ninh Thuan provincial people's committee would work to resettle people displaced by the planned NPP. Infrastructure planning and technical training projects have also begun.

At the beachfront site chosen, a port would be built to receive nuclear fuel by sea. An estimated 70 m3/sec of seawater would be taken in by the plant for cooling. The plant's demands for fresh water, 13000 cu m3/day, would be piped in from dams at Nha Trinh and Cai.