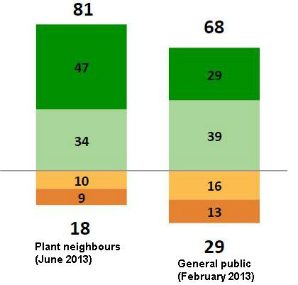 Eighty-two percent of Americans living within 10 miles of a nuclear power plant believe that used nuclear fuel assemblies should be consolidated at interim storage facilities until a final repository is developed, according to the results of a June survey.

The poll of 1098 adults was conducted by Bisconti Research Inc. with Quest Global Research Group on behalf of the US Nuclear Energy Institute.

It also found that 81% of reactor neighbours favour the use of nuclear energy, with almost half (47%) strongly favouring it.

Support is stronger than in the population at large, Bisconti said, noting that a similar survey carried out in February 2013 found 68% of US adults in favour of nuclear energy, with 29% strongly favouring the technology.

Nuclear energy was associated 'a lot' with reliable electricity (71%), efficiency (64%), clean air (60%), energy security (58%), job creation (58%), and affordable electricity (54%), but less so as a climate-change solution (31%), the survey found. This is despite the fact that it generate nearly two-thirds of all carbon-fee electricity in the USA.

The margin of error is plus or minus three percentage points, according to an NEI statement.