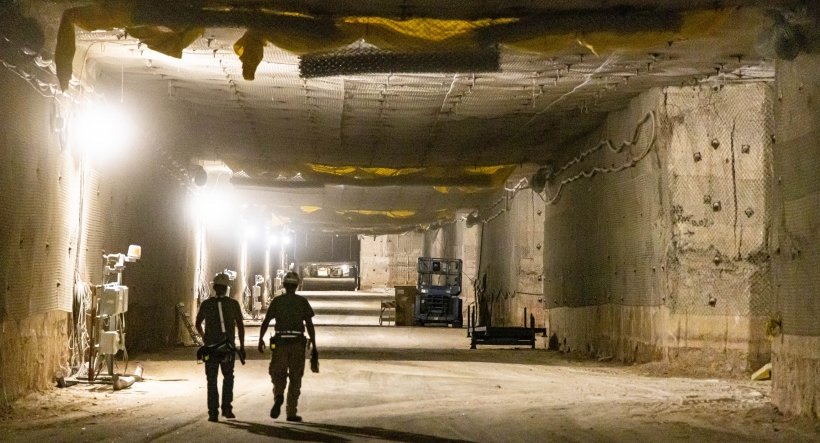 Panel 8 consists of seven emplacement rooms, each measuring 33 feet wide, 16 feet high and 300 feet long, the length of a football field minus the end zones. Creating a panel requires mining nearly 160,000 tons of salt. The panel is cut out of a 2,000-foot-thick layer of salt laid down 250 million years ago by the Permian Sea.

WIPP marked a milestone last month when employees finished emplacement in Panel 7 with the last of 20,056 containers. The most common containers, 55-gallon drums, totalled almost 13,000. Emplacement began in Panel 8’s Room 7 with waste containers from Oak Ridge National Laboratory in Oak Ridge, Tennessee. Panels are filled back to front; it normally takes about 2.5 years to fill a panel.

“We have already seen significant increases in our efficiency as we have emplaced in Panel 8 compared to Panel 7,” said Sean Dunagan, president and project manager of Nuclear Waste Partnership, the WIPP management and operations contractor.

WIPP has been disposing TRU waste since 1999, cleaning up 22 waste generator sites across the DOE complex. TRU waste contains manmade elements heavier than uranium on the periodic table and consists of clothing, tools, rags, residues, debris, soil and other items contaminated with small amounts of plutonium and other man-made radioactive elements. The waste is permanently disposed in rooms mined in an underground salt bed layer 2,150 feet below the surface.

Construction of WIPP followed congressional passage of the WIPP Land Withdrawal Act in 1992, which approved emplacement of up to 6.2 million cubic feet of waste. Emplacement in WIPP’s Panel 1 began in 1999.

EM, along with the Environmental Protection Agency EPA and state of Idaho has agreed to expand the Idaho CERCLA Disposal Facility at the Idaho National Laboratory (INL) Site by creating a new disposal cell adjacent to the existing cell at the centre CERCLA stands for the Comprehensive Environmental Response, Compensation and Liability Act.

The INL Site’s largest, active landfill will be expanded to accommodate the disposal of contaminated soil, debris and even reactor vessels for an additional 25 years following approval recently by EM, EPA and Idaho. They have agreed to increase the capacity of the Idaho CERCLA Disposal Facility (ICDF) and construct an additional disposal cell and lined ponds for landfill moisture control nearby ICDF to allow for future waste disposal.

Like the current landfill, the new disposal cell would have strict waste acceptance criteria. The cell will be comparable in design and construction to the existing landfill and will meet applicable state and federal regulations. The ICDF has a disposal capacity of 390,000 cubic metres and has provided onsite waste disposal while providing long-term protection of human health and the environment since its opening in 2003. The facility consolidates waste and radioactively contaminated decontamination and demolition debris from many areas of the 890-square-mile INL site, reducing the footprint into a single, managed and controlled area.

The landfill, located in the southcentral portion of the INL Site, is about 80% full. Without increasing its capacity, it would be full by 2025. EM, EPA and the state authorised a waste disposal increase for the existing cell by 140,000 cubic metres within the same footprint. Once filled, the cell will be covered with a cap designed to prevent water from infiltrating into the disposed waste. They also authorized construction of a new disposal cell with a waste disposal capacity of 530,000 cubic metres The new landfill cell is projected to start receiving waste in 2026 and will be designed to have an operational life of at least 25 years.

Image: The US DOE EM has begun emplacing TRU waste in Panel 8 of the WIPP in New Mexico (courtesy of DOE EM)