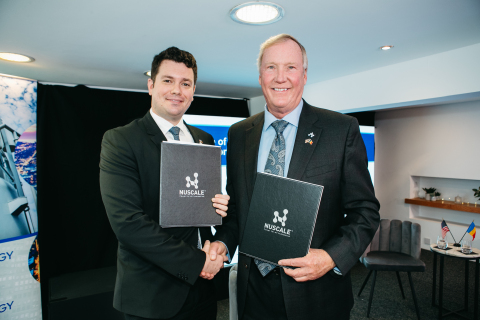 Under the teaming agreement, NuScale will help Nuclearelectrica evaluate its technology, and together, the organisations will take steps toward deploying a first NuScale six-module, 462MWe, power plant in Romania as early as 2027/2028. The plant is estimated to generate 193 permanent power plant jobs, 1500 construction jobs, 2300 manufacturing jobs and help Romania avoid 4 million tons of CO2 emissions a year.

“The United States views nuclear energy as a pivotal technology in the global effort to lower emissions, expand economic opportunity, and ultimately combat climate change,”  said Granholm. “We have been supporting the development of SMRs for decades, and it is extremely gratifying to celebrate this important milestone for Romania to help them achieve their climate goals.”

Popescu said: “Based on the Integrated National Plan in the field of Energy and Climate Change (PNIESC), Romania plans to reduce CO2 emissions by 55% until 2030 and its import dependency from 20.8% today to 17.8% in 2030. Nuclear energy has an essential role in achieving these decarbonization targets and ensuring the energy transition to a carbon-free economy, currently contributing 33% in total CO2-free energy production. After the implementation of strategic investment projects, this contribution will increase exponentially, while also ensuring energy security for Romania and the region. Building and operating small modular reactors will have proven environmental benefits of clean, emissions-free energy, bringing direct socio-economic benefits to the community it serves and generating continued prosperity for the regional industry and economy.”

He added: “We aim to develop the first SMR this decade in order to meet our critical energy demand and green targets securing a quality future for the generations to come. Decarbonation with nuclear is possible! I salute and support the signing of the teaming between the two companies, based on the long history of our two countries. The bilateral relations between Romania and the USA in the nuclear field started in the 1980s and since then they bring numerous benefits, most importantly economic stability and energy security. I thank our American partners and Secretary Granholm for supporting and endorsing the nuclear programmes.”

John Hopkins, NuScale Power Chairman and CEO noted that NuScale’s advanced technology presents "the perfect safe, economic and scalable solution” to climate concerns. “While world leaders emphasise how critical this moment is in addressing climate change, NuScale’s SMR technology not only represents a pathway to meet Romania’s climate commitments, but also is a means to bolster local economic growth. NuScale is excited to work with Nuclearelectrica and to showcase the many benefits our technology will bring.”

Nuclearelectrica CEO Cosmin Ghita said: “Nuclearelectrica is proud to be at the lead, valuing its experience operating at excellent standards and one of the highest performing nuclear plants in the world, into developing the first SMRs in Europe, an energy source that is 100% carbon free and which will reduce environmental footprints and put us on a path toward a zero-emission world. And at the same time, will form a new generation of engineers, which will benefit from the 25 years of experience Nuclearelectrica has and the ground-breaking innovation of NuScale’s SMR technology. What exciting times to contribute to the future of energy, to build a clean legacy for the generations to come.”