US and Vietnam begin 123 cooperation 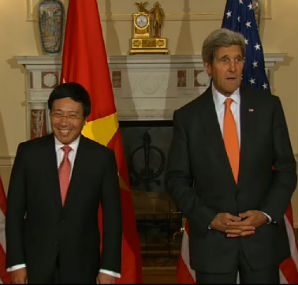 A U.S.-Vietnam agreement on civilian nuclear energy cooperation has entered into force, reports the US Nuclear Energy Institute. The agreement establishes the terms for commercial nuclear trade, research and technology exchanges between the two countries as provided under Section 123 of the Atomic Energy Act.

"This is a key part of a necessary effort to ensure that United States industry is able to participate in the highly competitive global nuclear energy market. The U.S. role and influence in that multibillion-dollar market is uncertain as global competitors have gained a larger share of it.

"Vietnam is one of those places where international competitors have a head start but, with this agreement in place, U.S. companies can now compete on a more even playing field...

"Just weeks ago, in anticipation of this agreement entering into force, U.S.-based Lightbridge Corporation signed a cooperative memorandum of understanding with Vietnam to support its nuclear energy safety program. That is a prime example of the benefits that will accrue both to U.S. industry specifically and to nuclear safety more broadly as the result of this agreement.

(Lightbridge signed a memorandum of understanding with the Vietnam Agency for Radiation and Nuclear Safety (VARANS) to collaborate on administrative, legal and regulatory infrastructure to support Vietnam's civil nuclear energy program. Lightbridge is the first U.S. company to work with VARANS on Vietnam's nuclear energy program. The parties agreed to the work by Lightbridge after a recent Asia commercial diplomacy trip led by U.S. Secretary of Commerce Penny Pritzker, it said).

"To support its rapid economic development, Vietnam intends to develop up to 10,000 megawatts of nuclear energy capacity by 2030, with the first reactors beginning construction in the coming decade. This agreement will enable U.S. suppliers to effectively compete against Russian and Japanese suppliers that already have established themselves in the Vietnamese market.

"Vietnam worked closely with the United States to develop a responsible and transparent nuclear energy program. This included Vietnam affirming its intent to rely on international markets for uranium fuel supplies and not to pursue domestic uranium enrichment or used-fuel reprocessing capabilities."