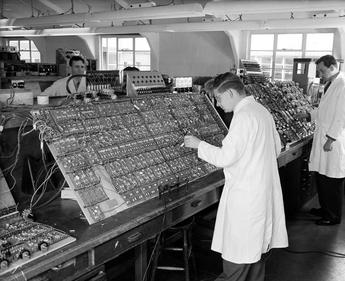 On 19 July 1954 the Atomic Energy Bill received royal assent and the resulting act gave the United Kingdom Atomic Energy Authority (UKAEA) the power “to produce, use and dispose of atomic energy and carry out research into any matters therewith.”

Sir Edwin Plowden became UKAEA’s first chairman, taking over from Lord Portal at the Ministry of Supply, which had previously been responsible for the atomic energy programme. His fellow board members were the great nuclear pioneers, Sir Christopher Hinton, in charge of the Industrial Group, Sir John Cockcroft, Research Group, and Sir William Penney, Weapons Group.

Together they presided over the early years of UKAEA, arguably the Golden Age of atomic energy. In 1954 UKAEA inherited nearly 20,000 employees – but by 1961 that figure had doubled to 41,000.

The immediate reason was a very big expansion of the defence programme and the need for much more plutonium and highly enriched uranium; new materials were also required for the H-bomb, which the government announced in February 1955 was to be developed. Between 1952 and 1958 the Weapons Group carried out 21 major tests of atomic and hydrogen warheads in Australia and the Pacific.

The Windscale Piles production reactors on the west Cumbrian coast were fully operational by the time UKAEA was formed. There is no doubt that the design and construction of the Piles in the late 1940s, at a time when Britain was struggling to recover from five years of war, was a major achievement. Plutonium was desperately needed for Britain’s post war nuclear defence programme. In 1950 Aldermaston became the main nuclear weapons site and received the first plutonium from Windscale in 1952.

But a further reason for the expansion was the development of nuclear power for electricity generation. It is difficult now to appreciate the excitement of those early years of nuclear research and development. At Harwell, western Europe’s first reactor called GLEEP (Graphite Low Energy Experimental Pile) had already been built as had BEPO (British Experimental Pile 0) together with radiation laboratories – the ‘hot labs’.

By 1954, Dounreay in Caithness had been chosen as the site for the emerging fast breeder reactor programme and the following year work began on the Dounreay Fast Reactor (DFR; see NEI April 2004, p61). Risley, established in the same year as Harwell, provided the design support for the reactor programme.

A great day of triumph for UKAEA came in October 1956 when the Queen visited Calder Hall to open the world’s first full-scale nuclear power station. Further Magnox power stations were to follow, many still providing baseload electricity to the national grid.

Early in 1957 the decision was taken to develop a new site for nuclear research. Winfrith Heath was chosen in Dorset and uniquely among the UK’s nuclear research facilities it was the only one to be built on a greenfield site.

It had been a great success story so far. However, in October 1957 the Windscale fire brought the euphoria of the first age of nuclear energy to an abrupt end. Both piles were shut down following the accident, never to be restarted.

Though the Windscale fire was the most serious nuclear accident in the UK it did lead to considerable safety, technical and regulatory improvements in the industry. The National Radiological Protection Board was formed as a direct result and, though an independent Nuclear Installations Inspectorate had already been proposed, the fire hastened its formation.

Despite this misfortune the civil nuclear programme continued apace. The Magnox family of reactors was still under construction and the prototype advanced gas-cooled reactor at Windscale came into full power in 1963 heralding the beginning of the second nuclear age.

That same year a promising new design of reactor was under construction at Winfrith – the SGHWR (Steam Generating Heavy Water Reactor).

THE COMING OF DIVERSIFICATION

In the early 1960s important changes took place which were to lead in the 1990s to the privatisation of UKAEA’s commercial arm, AEA Technology. These changes did not alter its mission in the short term – its overriding nuclear mission remained the same – but they opened up new avenues of development which in turn gave rise to new pressures.

The main feature was the broadening of UKAEA’s powers to permit it to undertake non-nuclear research and development. Up to this point, UKAEA’s activities had been solely focused on the production of nuclear weapons and the development of civil nuclear power. However, there was an inherent tendency for nuclear R&D to lead into non-nuclear activities, such as instrumentation, special steels and fabrication techniques, and leading-edge heat transfer technology which found applications in industry.

Other drivers for the diversification programme were the surplus capacity in the form of too many staff resulting from changes in the nuclear requirements and the new political agenda for Britain, which UKAEA was called upon to assist. In keeping with the spirit of Harold Wilson’s ‘white heat of technology’, the government wanted to align Britain’s public sector with the goals for industry.

It culminated in the 1965 Science and Technology Act, which gave UKAEA the power to undertake scientific research unconnected with atomic energy. The following year Walter Marshall became deputy director of Harwell and the pace of change quickened. UKAEA’s commercial development was becoming reality with the eventual formation of a business providing consultancy services and products to a wide range of industries including transport, chemicals, oil and gas.

In addition, the Energy Technology Support Unit was set up at Harwell to provide advice on energy options in response to issues arising from the growing energy crisis of the early 1970s.

It was at this time that UKAEA was to undergo one of its biggest upheavals. In April 1971 came the relatively modest move of the Radiological Protection Division to become the newly created National Radiological Protection Board. But it was followed by far more significant changes with the transfer of 10,000 staff from UKAEA’s Production Group and the Radiochemical Centre at Amersham.

The Production Group, responsible for the manufacture and sale of nuclear fuel, became British Nuclear Fuels. It was already providing a complete nuclear fuel service from enrichment through fuel element manufacture to reprocessing and waste management. Now it was charged with selling these services to the world. Similarly, the Radiochemical Centre produced radioactive isotopes for medical and industrial uses. It was subsequently successfully privatised as Amersham plc, now part of the GE Healthcare group.

The next step in the divestment process involved UKAEA’s Weapon’s Group. In August 1971, following recommendations from a committee led by the Marks and Spencer director, Derek Rayner, the government decided to transfer the Weapons Group to the Ministry of Defence. Despite initial resistance from the then UKAEA board the transfer went ahead in 1973.

In three short years UKAEA staff numbers had more than halved, from 30,000 to barely 13,000. Nevertheless UKAEA still retained its nuclear power mission and the non-nuclear business was growing year by year.

The following decade was a period of stability and relative prosperity for UKAEA. For much of the 1970s and into the 1980s, it was kept busy working on various reactor designs.

By far the biggest single programme, accounting for 30% of total expenditure and 600 scientists and engineers, was that of fast reactors. The Prototype Fast Reactor (PFR), with a capacity of 270MWe – far larger than its predecessor the DFR – was built at Dounreay and reached full power in 1977. A reprocessing plant for PFR was also built and started operations in 1979.

Meanwhile, fusion research was developing apace. In 1977 the decision was taken by the European Council of Ministers to site the Joint European Torus (JET) project at Culham. The first stone was laid in 1979 and opened by the Queen in 1984.

However, during the 1970s there was considerable debate about the choice of reactor design for commercial generation. An early decision to opt for the SGHWR design was later abandoned in 1978 in favour of the construction of two further AGR stations and the PWR design. Nevertheless, the SGHWR at Winfrith continued to reliably generate electricity for the national grid for a further 12 years until its closure in 1990.

PARTING OF THE WAYS

By the late 1980s much of the fission nuclear research programme was beginning to wind down. UKAEA operations at Springfields had been closed down and in 1988 the government finally announced that the PFR at Dounreay would be shut down in 1994. Though not unexpected it was a bitter blow for the dedicated team who had worked for many years on the fast reactor venture.

The decision was a turning point for UKAEA. In 1989, the commercial arm of UKAEA under its marketing banner of AEA Technology was formally launched with its group of business divisions. Elsewhere, government attention turned to the growing cost of the nuclear liabilities on UKAEA’s sites. To focus on the management and decommissioning task a new department was formed – Decommissioning and Radioactive Management Operations (DRAWMOPS) – which was the forerunner of UKAEA’s future mission.

During the early 1990s decommissioning began in earnest at Harwell and Winfrith and at both sites attention turned to their future development as science and technology business centres. At Windscale initial decommissioning work was carried out on the piles and the Windscale AGR.

The formal parting of the ways came in 1994 when AEA Technology became a separate body to UKAEA, which was charged with taking forward its primary role of decommissioning and site restoration and fusion research. At the same time the facilities services operation was divested to Procord, later to be sold to Johnson Controls. Two years later AEA Technology was floated on the Stock Exchange.

The focus on site restoration came later to the Dounreay site: it was not until 1994 that the PFR had shut down and reprocessing, both for commercial customers and its own fuels, continued well into the decade. However a safety incident in 1998, which led to a joint safety audit by the Health and Safety Executive and the Scottish Environment Protection Agency, was the catalyst for a government decision to cease commercial reprocessing, and later to encompass all reprocessing at Dounreay. Though painful at the time these decisions did allow the site to concentrate on its primary mission of decommissioning.

Since 1994 UKAEA has amassed considerable experience in decommissioning and site remediation – probably more than any other nuclear body in Europe. A total of 14 reactors out of 26 have now been completely removed, as have several major radioactive facilities. In addition, it has successfully kept the level of its liabilities under control with a steady reduction over ten years.

At the same time, its management of the fusion programme has gained plaudits from its European partners, a good omen for the future fast track development of this exciting technology.

It is this experience that will put UKAEA in a good position for the next major change in its development. Following a five-yearly review of UKAEA in 2001 the government proposed the formation of a national body to be responsible for all the UK’s civil nuclear liabilities. A white paper was subsequently published and the energy bill enacted in July 2004. Its measures include the formation of the Nuclear Decommissioning Authority, for whom both UKAEA and BNFL will manage the sites as contractors, though competition is expected after an initial period.