UKAEA and Tokamak Energy to collaborate on commercial fusion 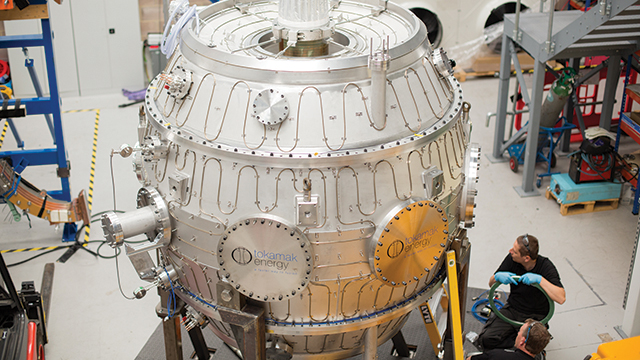 UK Atomic Energy Authority (UKAEA) and Tokamak Energy have signed a framework agreement to enable closer collaboration on developing spherical tokamaks as a route to commercial fusion energy. The five-year agreement will take the form of joint technology development, shared utilisation of equipment and facilities and associated secondment of staff between the two organisations.

The collaboration will focus on areas including materials development and testing, power generation, fuel cycle, diagnostics and remote handling. UKAEA CEO Professor Ian Chapman said fusion has great potential to deliver almost limitless clean energy for future generations. “This new agreement with Tokamak Energy will benefit both organisations and help advance our collective ambitions, because together we are stronger. Fusion presents an exciting opportunity for the UK and we’re proud our ground-breaking work here continues to drive innovation and progress as part of a thriving cluster.”

Tokamak Energy CEO Chris Kelsall said: “We are in a race against time to phase out the world’s reliance on fossil fuels and aim to deliver fusion as a clean, sustainable, low cost and globally available energy source. Tokamak Energy and UKAEA jointly recognise the importance of collaboration to accelerate the delivery of commercial fusion. We welcome the opportunity to progress knowledge, skill sharing and joint development opportunities with UKAEA, further boosting the UK’s world leading fusion cluster.”

UKAEA’s MAST Upgrade experiment has helped pave the way for the development of its ambitious STEP (Spherical Tokamak for Energy Production) programme, which aims to design and build a prototype fusion powerplant capable of producing net electricity.

It was announced last week that the STEP prototype powerplant will be designed and constructed at West Burton, Nottinghamshire, to demonstrate the ability to put net electricity on the grid, enabling future commercial fusion energy plants to be commissioned and constructed.

Tokamak Energy will soon be unveiling its next device, which will be the world’s first high field spherical tokamak to demonstrate the full potential of high temperature superconducting (HTS) magnets, due to be commissioned in the mid-2020s. It will also demonstrate multiple advanced technologies required for fusion energy and inform the design of the company’s first commercial fusion power pilot plant, which will demonstrate the capability to deliver net electricity to the grid.