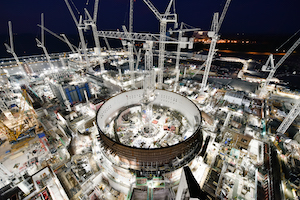 The UK Office for Nuclear Regulation (ONR) has granted permission for the start of bulk mechanical, electrical and heating, ventilation and air conditioning (MEH) component installation work at the new power station Hinkley Point C – a major new milestone for the project.

The forthcoming fit-out on the nuclear island of Hinkely Point C unit 1 is described as a “mammoth undertaking” requiring a workforce of up to 4000 at peak times, including welders, pipe fitters and electricians, working as an “alliance”. This phase of work in Somerset will take place over three years with NNB Genco, the subsidiary created by EDF Energy, teaming up with four suppliers – Balfour Beatty Bailey, Doosan, Cavendish and Altrad.

Following an in-depth assessment by ONR of the MEH proposals submitted by NNB GenCo, the regulator has approved the start of this next phase of the project. A 36-page Project Assessment Report setting out ONR’s decision to grant permission for the start of bulk MEH was published on ONR’s website.

Construction at Hinkley Point C began in October 2016, bringing the project just past the five-year mark with projections made last year by EDF Energy that the site should start generating power in mid-2026. ONR’s regulatory approach has established a series of hold points which can only be passed after intense assessment and inspection before any permissioning decision.

tinised the plans using five cornerstone themes -– organisational capability, design and safety, licence condition compliance, conventional health and safety, and fire safety, and nuclear security and safeguards. So far, most of the activity at Hinkley Point C has been in the field of civil construction but work on site is set to significantly increase around the installation of mechanical and electrical components and welding.

ONR said it has communicated with overseas nuclear regulators to understand the experiences of construction teams previously working on EPR reactor sites abroad and any issues encountered during the bulk MEH installation phase.

Shane Turner, Superintending Inspector for Hinkley Point C, said: “With ONR’s agreement to permission bulk MEH installation in Unit 1 nuclear island, this represents a major change to the project. Our scrutiny of the work at Hinkley Point C has been constant from the start and this will remain the same as developments move to its next important phase.”

He added: “At the front and centre of our regulation of any under construction plant is clear evidence from a site licensee to demonstrate its overall installations complies with the highest standards of UK safety and security. Only once these are met will ONR sanction the site to proceed to the next stages of the construction, installation and commissioning.”

Photo: The MEH phase will need a workforce of over 4000 and will see the installation of electrical systems, cables and pipework (Photo: EDF Energy)