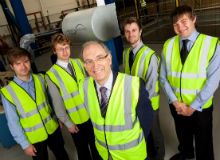 Sellafield Ltd has taken on 170 new apprentices, a record intake for the UK's largest nuclear site. Almost a quarter of the apprentices are female - seven times the national average for the nuclear sector.

The new recruits, mostly aged between 16 and 18, will begin their first year of the apprenticeship programme with local training provider Gen2 before moving on to roles with Sellafield Ltd.

The training programme will last three and a half years, with a job in industry guaranteed for those who successfully complete the course.

Remote handling consultancy Oxford Technologies also announced it has hired four new engineering graduates. The company, which employs approximately 40 staff, is involved in a range of remote handling projects, particularly in the field of nuclear decommissioning.

Oxford Technologies, which aims to grow significantly in order to become involved in larger projects, says it will be looking to employ more graduates in 2015 and beyond.