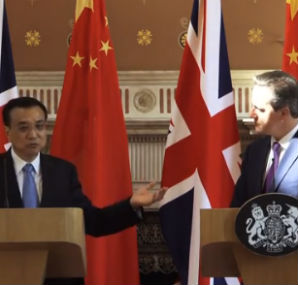 The UK and Chinese governments have signed two nuclear agreements that 'pave the way' for Chinese investment in the Hinkley Point C project, enable UK companies to work in China, and that could allow construction of a Chinese-owned, Chinese-designed nuclear reactor to operate in the UK.

The agreements were signed during a state visit by Chinese premier Li Keqiang to the UK. In a joint statement, the countries "recognise the threat of dangerous climate change as one of the greatest global challenges we face". As a result, the countries established a joint UK-China climate change research project, and acknowledged nuclear power as a low-carbon form of electricity generation.

The first agreement was published in the form of a joint statement from the UK and Chinese governments. The key paragraph reads:

"The UK Government welcomes investment and participation from Chinese companies in the Hinkley Point C project and progressive involvement more generally in the UK's new build nuclear energy programme. This could include leading the development of other nuclear power station site(s) in the UK and the potential deployment of Chinese reactor technology in the UK, subject to meeting the stringent requirements of the UK's independent nuclear regulators."

It builds on a memorandum of understanding signed by the countries in October 2013 on 'enhancing cooperation' in civil nuclear, after the original government-to-government MOU signed in 1985. Last year's agreement set up a cooperation working group.

In a press release, the UK Department of Energy and Climate Change said that the agreement "paves the way for Chinese companies to invest in Hinkley Point C, the first nuclear reactor plant to be built in the UK for a generation." The government and EDF's announcement about agreement of the commercial terms for Hinkley Point earlier this year mentioned that up to 40% of the project could be owned by Chinese consortia.

The second agreement, about enhancing cooperation in the field of civil nuclear industry fuel cycle supply chain, was between the UK government's Department of Energy and Climate change, the UK Nuclear Decommissioning Agency's International Nuclear Services business, the China Atomic Energy Authority and China National Nuclear Corporation. It says that INS and CNNC will cooperate on fuel cycle and transportation, decommissioning of nuclear facilities, and radwaste management and disposal, technical R&D, personnel training, and have regular meetings.

Separately, Rolls Royce announced a memorandum of understanding with China's State Nuclear Power Technology Corporation. The MoU will explore possible collaboration in areas such as engineering support, provision of components and systems, supply chain management and instrumentation and control technology. Rolls-Royce said it has been supplying instrumenttion and control and other instrumentation since 1994, when Qinshan and Daya Bay nuclear power plants started operation. It employs 2000 people in greater China, including joint ventures.