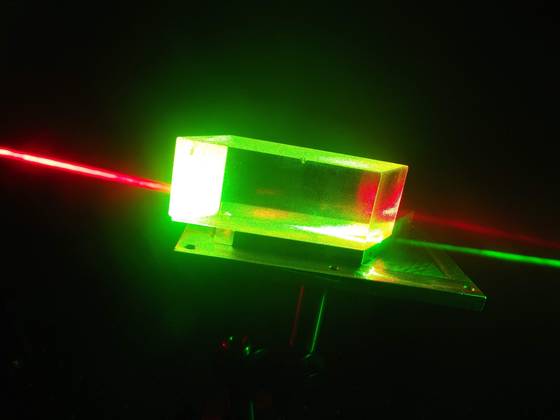 The module will now be shipped to the USA for installation at GLE's Test Loop Facility at Wilmington in North Carolina. GLE is the exclusive worldwide licensee of the Silex laser technology for uranium enrichment.

The module was designed, built and tested in Lucas Heights to GLE's specifications. Testing under plant-like operational conditions included an on-site independent review of the laser system module by a specialist US engineering contractor (sponsored by Cameco), which Silex said resulted in a positive assessment. System reliability was a particular focus.

"This is a pivotal milestone for the Silex uranium enrichment technology which demonstrates the ability of our laser systems to operate reliably at commercial scale for extended periods," said Silex Managing Director and CEO Michael Goldsworthy.

GLE CEO Stephen Long said: "We are pleased with the performance and capability of the laser system achieved by Silex and look forward to receiving the first module into our Test Loop, where it will be integrated with GLE technology to demonstrate separation performance at scale. We applaud the efforts of Silex's talented laser engineering team to design, develop, and deliver this unique, cutting-edge laser technology as GLE strives to commercialise laser-based uranium enrichment in the United States and expand US domestic nuclear fuel supply."

The test loop module is now being decommissioned and packaged for shipment to GLE's Test Loop Facility, where it is expected to be installed before the end of this year. Construction of additional identical laser system modules required for the commercial pilot demonstration project is under way, and all modules scheduled to be shipped to Wilmington by the end of 2023.

GLE said it plans to complete the commercial pilot demonstration project by the mid-2020s, after which it will assess the commercialisation timeline, adding that commercial operations could begin "as soon as 2027" depending on market demand and other factors. GLE's shareholders Silex and Cameco are assessing the timeline for the proposed Paducah Laser Enrichment Facility (PLEF), which will be deployed to produce natural-grade uranium hexafluoride (UF6) from enrichment of material from the US Department of Energy's depleted uranium tails inventories under a 2016 agreement.

Silex said its technology “is the only third-generation laser-based uranium enrichment technology under commercial development today”. Subject to the successful completion of the commercialisation project, market conditions and other factors, it “could enable GLE to become a major contributor to nuclear fuel production for the world’s current and future nuclear reactor fleets, through the production of uranium in three different forms at a PLEF multi-purpose production plant”.

These include: PLEF I - Production of natural grade UF6 via tails processing with the SILEX technology (the original PLEF Project) which will also help alleviate UF6 conversion supply pressure; PLEF II -  Production of low enriched uranium (LEU) and LEU+ from natural UF6 via an extension of the PLEF with additional Silex enrichment capacity to supply fuel for existing reactors; and PLEF III - Production of high-assay low-enriched uranium (HALEU) via additional capacity of Silex technology to supply fuel for next generation advanced small modular reactors (SMRs).

Production of natural grade uranium at the PLEF I would continue over three decades, with the output sold into the global uranium market at a production rate equivalent to a uranium mine producing an annual output of up to 5 million pounds of uranium oxide, which would rank in the top ten of today’s uranium mines by production volume, Silex said. Preliminary analysis by Silex of the PLEF I project indicates it could rank equal to a ‘Tier 1’ uranium project based on current estimates of the long-life and low cost of production.

While the PLEF I tails enrichment project has been in planning for several years, the opportunity for GLE to produce LEU/LEU+ fuel (in PLEF II) “has opened up only recently as a result of the geopolitical issues triggered by Russia’s invasion of Ukraine and the possibility of disruption to the supply of Russian-sourced nuclear fuel.” Silex noted.

Similarly, production of HALEU (in PLEF III) “has become an emergent issue as western nuclear fuel supply chains prepare for the exclusion of Russian-sourced HALEU for advanced SMRs”.