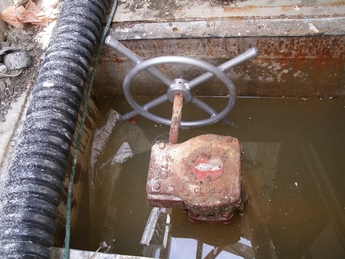 TEPCO continues to prepare an alternative cooling system for the Fukushima Daiichi unit 4 spent fuel pond, whose temperature hovered around 82°C on 8 July. It injected 165 tons of cooling water on 8 July.

Existing fuel pool cooling and cleanup system lines for the pool were found to be deformed by the hydrogen explosion. Although tests conducted after staff opened a manual valve on the fourth floor on 6 July suggested that the lines were working properly without leaking, TEPCO is still planning to replace deformed pipes as a precautionary measure. Once the alternative cooling system is operational, which according to TEPCO will occur at the end of July, these pipes will be connected to a temporary heat exchanger at the radioactive waste treatment building.

To lower dose rate near the spent fuel pool while equipment is installed, TEPCO started water injection into the reactor well and pool; but it stopped it less than an hour later when a leak was found.

Also, a robot has investigated dose in the unit 3 reactor building to prepare for nitrogen injection as a precaution against hydrogen explosions. TEPCO had cleared the area and laid steel plates laid on the floor from the truck bay door to the injection point to reduce radioactive dose; readings from the dosimeter carried by the robot confirmed that dose was halved or more after plate installation. Despite those measures, dose remains relatively high, ranging between 25-41.5 mSv/hr. A temporary coupler has been installed on an injection line to start nitrogen injection.

In other news, TEPCO has reduced to six its final count of workers exposed to high radiation doses (over emergency limits of 250 mSv) in the immediate aftermath of the crisis at Daiichi (to the end of March), all TEPCO employees. It had previously estimated nine employees had received high doses. The highest confirmed dose received was 678 mSv. In addition, 30 people, 27 TEPCO employees and three contractors, have been exposed to doses greater than 100 mSv.