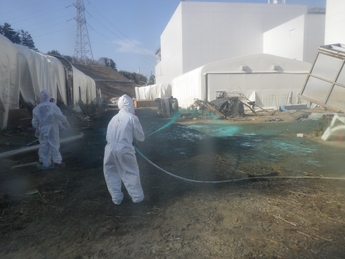 Electrical utility TEPCO has begun large-scale spraying of the Fukushima Daiichi site with a resin to prevent the spread of radiologically-contaminated dust.

It has been running tests for the past several weeks on bare ground, concrete and vegetation around the common spent fuel pond. Since the beginning of April, it has sprayed about 25,000 m3 of the synthetic resin, called Kuricoat, in tests.

Now, the facility will spray around the reactor buildings, on slopes and the fields upland to the facility.

To reduce the risk of radiation, the spraying will be remote-controlled. An operator will sit in a van up to 150 metres away from a remote-controlled dumper truck mounted with a spray gun and tank.

The need to isolate contaminated soil at the site has been reinforced by TEPCO's publication of site soil data sampled on 11 April.

Second, high levels of contamination of other radioactive nuclides were found in three places on site in a 7 April survey by JAEA and in an 11 April survey by the Japan Chemical Analysis Centre. For example, a baseline survey in Fukushima province from 2009 found levels of caesium-137 (half-life 30 years) up to 21 Bq/kg (other radionuclides were not detected). In April, average caesium-137 values at each site were 240,000 Bq/kg (playground), 710 Bq/kg (forest) and 2,150,000 Bq/kg (waste facility). Iodine-131 (half-life 8 days) and caesium-134 (half-life 2 years) contamination levels were comparable at each site.