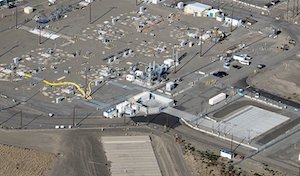 The US Department of Energy (DOE) announced that workers have begun the first large-scale treatment of radioactive and chemical waste from large underground tanks at the Hanford Site. This marks completion of the first of an ambitious slate of 2022 priorities set by the DOE Office of Environmental Management (EM).

In a message of congratulations to the Hanford workforce, EM Senior Advisor William “Ike” White said the Tank-Side Caesium Removal (TSCR) System was a “cornerstone of the Direct-Feed Low-Activity Waste (DFLAW) programme” in EM.

“It’s a capability that will transform the Hanford Site and benefit the entirety of the EM programme,” White said. “I’m optimistic about what Hanford will achieve this year as we work toward around-the-clock operations to treat tank waste.”

The newly operational TSCR System removes radioactive caesium and solids from tank waste. The treated waste will be fed directly to the nearby Waste Treatment and Immobilisation Plant for vitrification, or immobilisation in glass, when the plant comes online next year.

The caesium removal system is a key part of the site’s DFLAW programme, an assembly of several highly interdependent projects and infrastructure that will operate together to vitrify and safely dispose of millions of gallons of low-activity tank waste once operational.

“This is an exciting new era in our Hanford clean-up mission,” said Brian Vance, manager of EM’s Office of River Protection and Richland Operations Office. “For the first time in Hanford Site history, we are treating a significant amount of tank waste on an industrial scale.”

Hanford tank operations contractor Washington River Protection Solutions (WRPS), working with EM staff, other site contractors and regulatory agencies, built, installed and tested the caesium removal system next to large underground storage tanks. Those tanks - the AP tank farm - are located near the centre of the Hanford Site, which is less than a quarter mile from the vitrification plant. The caesium removal technology is nearly identical to a system operating at DOE’s Savannah River Site in South Carolina.

John Eschenberg, WRPS president and CEO, said the launch of the TSCR System operations was nearly three years in the making. “I’m extremely proud of our team, the dedicated workforce who delivered this project on time and on budget during some challenging times over the last 18 months,” he stated.

The Hanford Site is home to approximately 56 million gallons of radioactive tank waste stored in 177 underground tanks, representing one of DOE’s largest environmental risks and most complex challenges. The tank waste is a result of nearly five decades of plutonium production during World War II.