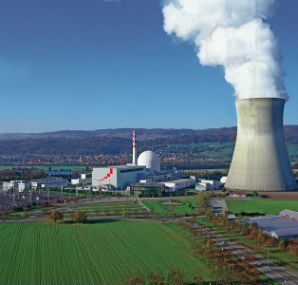 The Swiss Federal Nuclear Safety Inspectorate (Ensi) said on 2 July that it had approved the restart of the 1220MWe single unit Leibstadt nuclear plant in the canton of Aargau after its annual maintenance and refuelling outage, which began on 2 June.

Ensi said experts from the Swiss Association for Technical Inspections had checked the work related to the pressurised pipes and containers to ensure compliance.

Ensi also said that investigations by the Paul Scherrer Institute in 2018 had shown that local discoloration found on some cladding tubes was not due to an increase in oxidation and that the deposits did not weaken the wall thickness of the cladding. During the outage, visual inspections were again carried out on fuel assemblies and showed no signs of the local deposits.

During the 2016 annual outage, operator Kernkraftwerk Leibstadt (KKL) , which is owned by Axpo, Alpiq and BKW, found discoloration suggesting oxidation problems on the cladding material of some fuel rods of 47 fuel elements in the reactor core. KKL said examinations had shown that because of the surface oxidation, 32 fuel rods in 15 fuel elements needed to be replaced with zirconium rods. Further investigation of the fuel cladding suggested the problem had been caused by “dryout”, which occurs when the surface of fuel rods is no longer covered sufficiently by a film of water, leading to an elevated surface temperature.

As a result, since 2017, the thermal output of the boiling water reactor has been limited to 88-95% to avoid the risk of dryout. The reactor was restarted in February 2017 following the extended outage but closed the following October for another extended outage for replacement of 16 fuel elements did not meet the specifications. Subsequently a further eight fuel elements in the 648 assembly core were found to be affected by the same issues and were also replaced. KKL said replacement of the fuel elements necessitated a re-design of the reactor core including a comprehensive release process by Ensi further delaying its restart until late December 2017.

Ensi has now said that the limitations imposed on reduced core throughput and reduced fuel performance over the past three cycles has been confirmed to be effective. The limits will remain for the upcoming 36th cycle. However, since only new fuel assemblies of a type not affected by the deposits were loaded during the 2019 refuelling outage, Ensi agreed not to reduce fuel performance for this type of fuel assembly. The reactor can now be operated at full power.