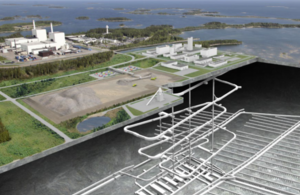 The Swedish government has decided to allow SKB to build a final repository for used nuclear fuel in Forsmark in Östhammar Municipality and an encapsulation plant in Oskarshamn.

“It is a historical decision that enables SKB to dispose of the nuclear waste that our generation has produced. This decision is met with open arms. We are now looking forward to implementing Sweden’s largest environmental protection project,” said SKB CEO Johan Dasht.

The final repository project will bring investments of around SEK19 billion ($2bn) and will create about 1500 jobs. The projects will be financed by funds already available from the Nuclear Waste Fund.

“For SKB, the decision further strengthens our position as a world leader in this area. The final repository also provides long-term solutions for electricity generation and is, thereby, our contribution to enabling fossil-free living within one generation,” added Dasht.

SKB has researched and developed technology for the final repository for more than 40 years in collaboration with experts from universities, research institutes and higher education institutions in Sweden and abroad. The final repository method was reviewed and assessed by the Swedish Radiation Safety Authority and the Land and Environment Court. The host municipalities, Östhammar and Oskarshamn, have also worked with these issues for a long time and have thereby taken considerable national responsibility for ensuring that Sweden has a functioning final repository system in place.

“Our application has undergone extensive review and it has clearly emerged that SKB’s final repository method satisfies the stringent safety requirements for man and the environment. We have a safe and secure final repository solution that we are very proud of,” Dasht said.

The next step in the licensing process is for the Land and Environment Court to establish conditions for the facilities. The Swedish Radiation Safety Authority will also decide on permit conditions under the Nuclear Activities Act. Construction can start only when all licences are in place, after which time, it will take about 10 years to build the repository.

“It is exciting to see our international counterparts moving ahead,” said Laurie Swami, president and CEO of the NWMO. “Today’s announcement demonstrates the continued scientific consensus that a deep geological repository represents the best solution for the safe, long-term management of used nuclear fuel.”

The NWMO has a longstanding and mutually beneficial relationship with SKB, working together for the past 15 years on a number of technical studies on the safety of deep geological repositories, NWMO said.

As we make progress at home and engage with communities about a GDF to safely deal with radioactive waste for the long-term, it’s encouraging to see progress around the world too.

We will continue to work with international colleagues, incorporate latest knowledge and technologies, and learn from their experience."

SKB has received approval to build a final repository in Sweden (Photo: SKB)