Study finds expectation that nuclear will hang on in France 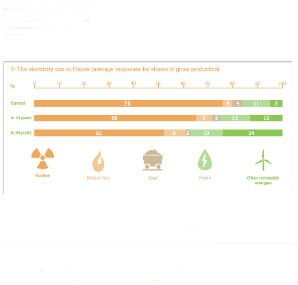 The energy market experts expect the share of nuclear power in the French electricity mix, on average, to shift from approximately three quarters at present to approximately two thirds in 10 years, and to half in 30 years. Assuming a linear evolution over time, it would therefore take France about three times as long to reach the share of nuclear power intended by the current government, according to the first edition of the Energy Market Barometer from the Grenoble Ecole de Management.

The declining share of nuclear power will primarily be replaced by renewable energy sources (other than hydropower). These are expected to increase from a current share of 5% to 13% in 10 years, and to 24% in 30 years. The share of hydropower in the French electricity mix is expected to remain fairly constant. The share of natural gas is expected to increase steadily, particularly over the next 10 years. It will nonetheless remain below 10% over the course of the next three decades, the report says. Finally, coal continues to play a rather marginal role, and it will even go as far as losing half its market share in the long term.

The authors of this twice-yearly report said that they found 'fairly substantial' variations amongst the experts' assessments, reflecting the uncertainty about the future shares of energy sources in the electricity mix. In absolute terms, uncertainty (measured as the standard deviation) is roughly twice as high for nuclear power and other renewable energies as for fossil fuels, for both projection periods. Uncertainties of all energy sources for the 30 year projection period are approximately 50% higher than for the 10 year projection period.

The survey was carried out in November-December 2013 and included 206 participants from industry, science, and public administration in France.