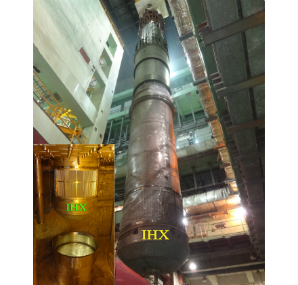 The government of India's Department of Atomic Energy has announced that the 500 MWe Prototype Fast Breeder Reactor (PFBR) being constructed at Kalpakkam, Tamil Nadu is at an advanced stage of construction and commissioning, but will miss its September 2014 deadline for first criticality.

A report from local media NDTV said that the reactor would be commissioned in 2015.

"Being the first of its kind reactor being built completely indigenously in our country, some delays on account of the requirement of rigorous testing and qualification of all major equipment and sub-systems are anticipated," said Jitendra Singh, union minister of state for Science and Technology and Ministry of Earth Sciences, in a statement.

The statement reported the current state of progress with the build. Erection of all major components of the reactor has been completed. Commissioning of auxiliary systems such as the safety service water system, emergency service water system, ventilation, electrical and gas systems have been completed. The next stage in commissioning is preheating and filling of sodium into secondary and primary systems. The project has achieved overall physical progress of 97.6% at the end of June 2014.

The PFBR is a sodium-cooled pool-type fast reactor. The main goal of this unit is to localize materials and suppliers, and also to demonstrate the possibility of using the country's stocks of thorium and depleted uranium to create fissile uranium and plutonium fuel.

It is the first unit of the second stage of India's original three-stage programme of nuclear development. The first step was natural uranium-fuelled PHWRs, and the third step envisages thorium-based advanced heavy water reactors.