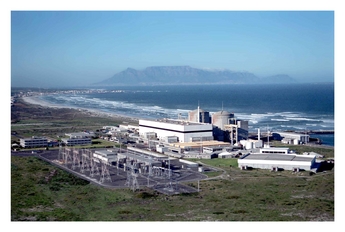 South Africa’s power utility Eskom cannot afford the planned nuclear power expansion programme, acting Eskom chief financial officer Calib Cassim said on 30 January. The government has said it will push ahead with the plan but will but at a slower pace in the face of poor economic growth. “I can’t go and commit to additional expenditure on a nuclear programme,” Cassim told reporters during the release of Eskom's financial results for the six months to 30 September 2017. Eskom reported a 34% drop in interim profits to ZAR6bn ($504m) due to declining sales and higher financing costs.

"[We] can't commit to nuclear if [we] have limited funds. Now the focus is on maintaining the current assets and then whether we can sustain nuclear in the future," Cassim said, according to SA news. He noted that the 2.2% tariff increase energy regulator Nersa granted Eskom in the current year had led to a 30% reduction in cash from operating activities, leaving insufficient funds to pay increasing finance costs.

Eskom recorded an operating profit of ZAR6bn but also reported a ZAR12bn cash shortfall over the year. Cassim said Eskom needed a cash injection of ZAR10bn by 1 February and another ZAR10bn by 27 February. Eskom's debt stands at ZAR367bn noted acting CEO Phakamani Hadebe, adding that the company has secured 54% of funding for the 2017/18 financial year.

Doubts about the economic viability of South Africa’s nuclear plans have been raised by other officials. African National Congress (ANC) President Cyril Ramaphosa told a news conference at the recent World Economic Forum in Davos, Switzerland, “We have to look at where our economy is. We have excess power right now, and we have no money to go for major nuclear plant building.” President Jacob Zuma has made the nuclear project a priority, but Deputy President Cyril Ramaphosa, who replaced Zuma as ANC leader in December, said the funds are not available. Zuma’s opponents have long raised concerns about a lack of transparency in the nuclear project, as well as about the strain it would put on public finances.

South Africa's 2010 Integrated Resource Plan (IRP) called for the construction of new nuclear capacity over the period to 2030. Eskom's two-unit 1830MWe Koeberg nuclear plant generates around 5% of South Africa's electricity. The IRP for 2010-2030 calls for construction of 9600MWe of new nuclear capacity to supply 23% of the total electricity, with the first reactor to come online by 2023. In December 2015, Eskom issued a request for information (RFI) to companies interested in participating in the programme, but the South African High Court in 2017 ruled ministerial determinations underpinning the nuclear procurement plans to be unlawful and unconstitutional. It also declared unlawful the case for intergovernmental nuclear cooperation agreements, including those with Russia, South Korea and the USA, and ruled that they and the RFI must be set aside. Last October, the Department of Environmental Affairs authorised Eskom's Final Environmental Impact Report for a new NPP at Duynefontein adjacent to the Koeberg plant.