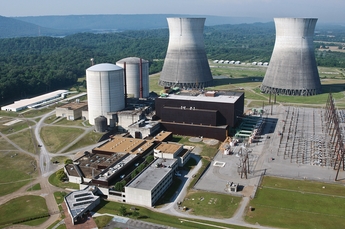 Franklin Haney's Nuclear Development LLC on 7 June signed a letter of agreement to hire SNC-Lavalin, the American subsidiary of Canada’s SNC-Lavalin Nuclear to undertake engineering and construction work to finish at least one of the two reactors at the Bellefonte nuclear plant in Alabama, USA.

SNC-Lavalin is to complete work on Bellefonte unit 1 after Haney completes his purchase of the plant, which he said he expects to buy from the Tennessee Valley Authority (TVA) by November. Preston Swafford, the chief nuclear officer for SNC-Lavalin who previously headed TVA's nuclear programme, including Bellefonte, for seven years until 2013, said: "The impetus to complete the Bellefonte plant signifies that nuclear power has regained interest as an energy source that is necessary as part of the overall energy portfolio in the USA."
Nuclear Development successfully bid $22m as an initial down payment to buy the partially-completed Bellefonte plant from TVA in a two-part auction held in November 2016. Haney bid $111m for the site, with two partially-built pressurised water reactors (PWRs) plus infrastructure including switchyards, office buildings, warehouses, cooling towers, water pumping stations and railroad spurs. He was given two years to close on the property, which in the meantime is being maintained by TVA, and has five months to close the deal. To help finance the projected $13bn cost of finishing construction, Haney's firm, together with some Tennessee Valley members of Congress, have asked the Department of Energy to consider granting $5bn of federal loan guarantees for the project. Haney said earlier this year that he has an agreement with prospective customers to buy   power produced by the 1256MWe Bellefonte 1, and he is seeking customers to buy electricity from unit 2 in 2023.
TVA purchased Bellefonte in 1974 and began construction of two Babcock & Wilcox PWRs at the site. Construction was suspended in 1988, with Bellefonte 1 about 90% complete and Bellefonte 2 about 58% complete. Since then, many of the reactors' components have been transferred or sold. Others will require upgrading or replacement. In 2011 TVA announced plans to complete Bellefonte 1 following the completion of its Watts Bar 2 NPP. However, in the face of lower energy demand and changing usage patterns, in 2015 TVA determined that it would not need to build any new  baseload capacity for at least 20 years, and the authority decided to auction the plant to the highest bidder.
Critics say the plant is not viable. "We don't believe that Bellefonte could ever meet the safety standards that the [Nuclear Regulatory Commission] would require because it was put outside of the nuclear quality and assurance standards and we've seen no credible programme to bring it back into those requirements," said Stephen Smith, executive director of the Southern Alliance for Clean Energy. "I am quite sure it will never be built.”

However, SNC-Lavalin has a proven track record of successfully completing new power plants on four continents, as well as reactor life extensions in Canada, South Korea and Argentina. Sandy Taylor, president of the nuclear divison of SNC Lavalin, said SNC "is collaboratively working" with many major nuclear vendors in North America to form the most capable team that has the depth and breadth of experience to complete the Bellefonte project.