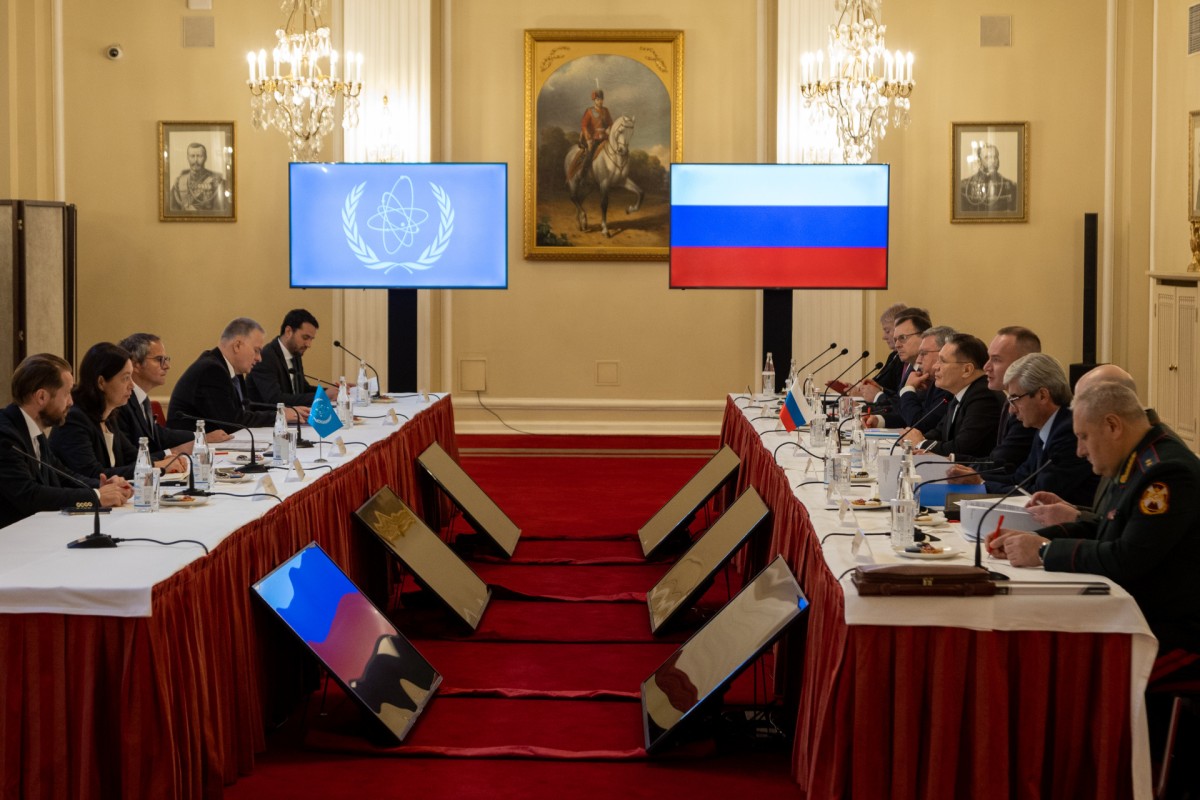 External power has been restored to Ukraine’s Zaporizhzhia Nuclear Power Plant (ZNPP), a few hours after its connection to the grid was cut for a second time in less than a week, Director General Rafael Mariano Grossi of the International Atomic Energy Agency (IAEA) has said.

The IAEA team of experts present at the ZNPP said the plant’s connection to its last remaining operating 750 kilovolt (kV) power line was re-established around 1:40pm local time, enabling the plant to switch off the diesel generators that had been providing the reactors with electricity after the off-site power was lost in the morning.

Director General Grossi welcomed the restoration of external power but stressed that the power situation at the ZNPP, Europe’s largest nuclear power plant, remained very fragile. Ukraine’s national nuclear operator Energoatom earlier said shelling had caused the off-site power loss by damaging a sub-station – part of the grid’s electrical transmission and distribution system – located far from the plant itself. On 8 October, the ZNPP’s external power connection was cut due to renewed shelling near the plant but was repaired the following day. The plant’s diesel generators have fuel for about 10 days.

The plant’s six reactors are in cold shutdown but still require power for cooling and other essential nuclear safety and security functions.

A secure off-site power supply from the grid is essential for ensuring nuclear safety. This requirement is among the seven indispensable nuclear safety and security pillars that the Director General outlined at the beginning of the conflict.

According to local press reports, IAEA representatives at ZNPP have access to all the data about its work. Vladimir Rogov, a member of the Main Council of the Zaporizhia region Administration said a new group of four IAEA experts had arrived at the plant to relieve the two who had been there since early September. They include citizens of Ireland, Canada, Lithuania and Slovakia.

However, the status of the plant remains in contention, although Russia has now formally annexed the territory where the plant is sited following a referendum, which saw a majority supporting that development. On 5 October, Putin ordered the transfer of the ZNPP to Russian management, and on 8 October, the Russian government ordered the creation of the Federal State Unitary Enterprise Zaporizhia NPP to run the plant. The adviser to the General Director of Russian nuclear utility Rosenergoatom, Renat Karchaa said that the new head of ZNPP, Oleg Romanenko, is already at the station and has begun to perform his duties. On the other hand, Ukraine’s Energoatom continues to claim ownership of the plant and Energoatom Director General Petro Kotin has appointed himself as director of the facility.

This followed the expulsion to Ukrainian controlled territory of former ZNPP Director Ihor Murashov on 3 October after he was temporarily detained by Russian forces and admitted to passing information about the plant to Ukrainian intelligence services. Since then, Valery Martynyuk, the plant’s Deputy General for Personnel Management was dismissed on 11 October for reportedly systematically persuading qualified staff to leave for work in Ukraine. He also is accused of passing personal data of employees to the Ukrainian special services including assessments of their loyalty to Russia.

Meanwhile, Vladimir Rogov and other local officials including Acting Governor of the region, Yevgeny Balitsky, said there are no plans to restart the reactors of the nuclear power plant in the near future. Alexey Anpilogov, president of the Foundation for Support of Scientific Research and Development of Civil Initiatives "Osnovanie", an expert in the field of nuclear energy, told Vzglyad newspaper also believes that the return of ZNPP to the Russian energy system will not be fast. "At the moment, the NPP operates as an energy island, without any connections to the system, which are destroyed by regular Ukrainian shelling. Secondly, the integration process will not be easy, because the plant's capacity will be excessive for those regions that are now part of the Russian Federation, and even for the Crimea, which it supplied earlier. This is because half of the capacity that the NPP supplied was used in the large industrial area – Donetsk-Pridneprovsky. So far, the cities that are part of this economic region are cut off from the station."

Rosenergoatom said that ZNPP cannot yet be connected to the Russian energy system. Zaporizhzhia NPP currently does not have the technical capabilities to connect to the Russian energy system, Renat Karchaa, adviser to the General Director of the Rosenergoatom, told TASS on 11 October. According to Karchaa, experts are currently analysing the real state of the NPP and all the technical conditions related to ensuring its operation.

On 12 October, Rosatom Director Alexey Likhachev told Interfax that several units at ZNPP were using US Westinghouse fuel and said these would eventually be converted back to using Russian fuel, although he gave no timeline. "This is a purely technological issue, not a political one .... We make the best fuel for the VVER reactor, " he said.

According to Alexey Anpilogov, the American fuel used at ZNPP will most likely not be removed until the end of its operational life. He said Westinghouse had copied the design of Soviet fuel but made several technical changes. “Moreover, these changes were unauthorised, they were not agreed with the manufacturer. As a result, many companies that support the operation of the plant have withdrawn their guarantees from ZNPP," he added.

He explained that this related to the geometric parameters of the fuel design and the percentage of uranium enrichment. Westinghouse increased the fuel's uranium enrichment by 0.5-0.7% compared with the Russian standard. This enabled the fuel to last longer. So, Westinghouse fuel burns for up to 18 months, while Russian fuel burns out for 12 months. “However, there is a danger here: when the fuel is not balanced in terms of the percentage of uranium content, then more effective cooling is also needed – there is more fuel, it burns more intensively." As a result the fuel elements overheated, changing the geometry of the fuel assemblies themselves and they began to "wedge" in the core, he explained.

This happened, for example, at the Czech Temelin nuclear power plant, after which the management decided to abandon Westinghouse fuel. The same problem was initially faced by Ukraine, “but Westinghouse managed to convince them that this fuel is cheaper to operate, although it is actually more expensive”. Initially this led to a series of accidents after which Westinghouse slightly lowered the percentage of enrichment in fuel and adjusted the cooling system “to ensure that American fuel worked more or less steadily”, he explained. However, before starting to use Russian fuel again, it will be necessary to re-configure the plant, he said.

In preparation for the meeting of Russian President Vladimir Putin and Grossi discussed “issues of interaction between the Russian Federation and the IAEA in ensuring the safety of the Zaporozhye NPP”. In particular, they discussed possible approaches to the implementation of the initiative to create a Nuclear Security Protection Zone around the Zaporizhzhia NPP. Rosatom said: “There is an understanding of the need to continue discussions.”

Putin noted: “Today, there are elements of excessive and dangerous politicisation of everything related to nuclear activities. But we very much hope that - and thanks to your efforts – we will be able to reduce all the rhetoric in this regard, bring this area of our activity and cooperation to a normal state, despite all the turbulence and complex processes that are taking place on the world stage.” He added: “We are very glad to see you and will be happy to discuss all the issues that we are mutually interested in, and perhaps even cause some concern…. In any case, we are open to this dialogue and are glad to see you.”

Last week, Grossi met with Ukrainian President Volodymyr Zelensky in Kyiv and they are expected to meet there again following the discussions with Putin in St Petersburg. "The situation in the region around the Zaporizhzhia Nuclear Power Plant and elsewhere has become increasingly dangerous, precarious and challenging, with frequent military attacks that can also threaten nuclear safety and security," Grossi said. "Now more than ever, during these extremely difficult times, a protection zone must be established around the ZNPP. We can’t afford to lose any more time.”

Image: The IAEA and Russia meet to discuss the issues of cooperation in ensuring the safety of ZNPP (courtesy of IAEA)