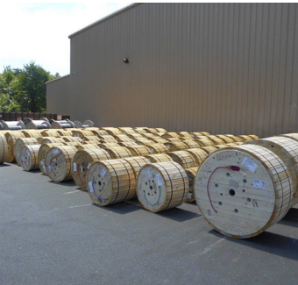 It says that recent installation of the cables is an industry first for 60-year qualified nuclear cables anywhere in the world.

RSCC Wire & Cable president Steven Bonnell said that the delivery was completed "under the most challenging circumstances of scrutiny and delivery for KHNP."

The first two APR-1400s to begin construction were KHNP's Shin Kori 3 and 4, at the Kori Nuclear Power Complex in Busan. Construction began at unit 3 in October 2008 and unit 4 in August 2009. The units were scheduled to start commercial operations in August and September 2014 but the start dates were pushed back to 2015 and 2016 after safety-related cabling failed quality tests.

RSCC has delivered more than a million feet of cable to meet the urgent demand for qualified replacement cables. More than 1000 reels of low and medium voltage power, instrumentation and control cables have been air-freighted from JFK Airport to Korea over the past six months.

"Shin Kori's cables have undergone more quality inspections than any other cable in the nuclear industry and KHNP has been one of RSCC's most conscientious customers in the more than 40 years that we have been supplying nuclear cables," said Corey McDaniel, RSCC vice president Asia.

RSCC passed a series of equipment qualification (EQ) tests to ensure the cables will withstand the most challenging circumstances 60 years into the future. The cables installed at Shin Kori are the first ever to meet such stringent EQ requirements, demonstrating the ability of RSCC's cable to withstand harsh conditions that include extreme temperatures, pressures, steam, and radiation.

RSCC said its cables have been installed in more than half of Korea's reactors and in every reactor in the U.S. and most major U.S. government nuclear facilities. The company's nuclear manufacturing cell is in East Granby, Connecticut.