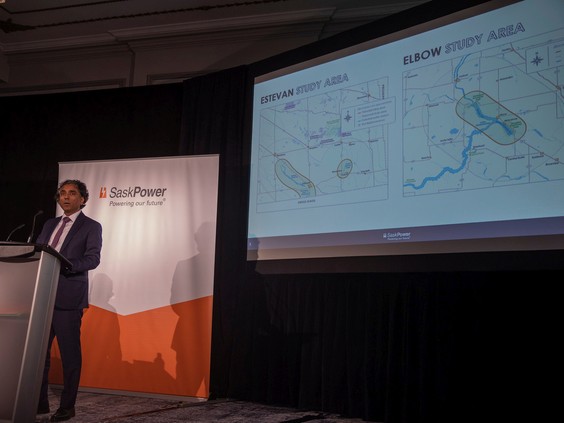 Saskatchewan’s first small modular nuclear reactor (SMR) could be located in either the Estevan or Elbow areas, utility SaskPower has announced. SaskPower officials said they are studying the two locations because they would meet the needs of supporting an SMR. The locations are close to a suitable body of water, have sufficient transmission and road infrastructure and could sustain a sizeable workforce.

“Today’s an exciting day for all of us at SaskPower,” said President and CEO Rupen Pandya, during the news conference. “SaskPower has reached an important milestone on our path to a sustainable energy future. But while this is a very exciting and important step, it’s an early one.”

SaskPower plans to select one of the two areas by the end of 2024 for further evaluation. A final decision on approving an SMR, however, is not expected before 2029. Officials have said early planning is required to ensure the province meets regulations. If it is approved, the SMR could be operational by 2035.

The Elbow site is located next to Lake Diefenbaker, which is also subject to a proposed $4 billion irrigation project. Officials said the water there would be able to support the irrigation project and the SMR. The Estevan study area includes Grant Devine Lake, Boundary Dam Reservoir and Rafferty Reservoir. Waste from operating the SMR would be stored on site.

SaskPower will conduct a more detailed environmental, hydrological, geological, geotechnical, meteorological and other technical analysis of the two sites. This includes engaging with residents in the communities, Indigenous rights holders, municipal officials and other organisations. SaskPower will also hold broader public consultations.

“We’re going to look at the pros and cons and see how it might benefit the village,” said Elbow Mayor Colleen Hoppenreys. “There can always be concerns, but we have to talk with the people first.”

A cost for the project has not yet been decided, but past estimates suggest an SMR would cost at least CAD2-5 billion ($1.5-2.7bn. One or two reactors could be constructed on the chosen site. SaskPower expects to own and operate the facility if it is approved. Pandya said the utility hopes to work with the federal government to receive some funding for the facility.

Don Morgan, the minister responsible for SaskPower, said the facility will go through a rigorous assessment, which includes the federal licensing process. SaskPower aims to meet net-zero emissions following requirements from the federal government to phase out coal by 2030. When asked what the back-up plan if the project is not approved, Morgan said, “We will supply reliable baseload power, no matter what we have to do.”

To identify the two study areas, SaskPower used technical criteria based on the requirements of the various SMR technologies the utility evaluated earlier this year. Some of these criteria include proximity to a suitable water supply, existing power infrastructure, workforce, nuclear regulations and standards, and learnings from past generation siting projects.

SaskPower in June selected GE Hitachi Nuclear Energy's BWRX-300 SMR for potential deployment in the province in the mid-2030s following assessment of several SMR technologies. OPG has already selected the GE-Hitachi BWRX-300 for their Darlington New Nuclear Project in Ontario, where Canada's first commercial, grid-scale, SMR could be completed by 2028.

Image: At a recent news conference SaskPower's President and CEO, Rupen Pandya, identified two locations  suited to the deployment of an SMR (courtesy of Regina Leader-Post)